I’m using a Raspberry Pi4 8GB with RoPieee installed set up as a Roon Bridge I am using a Khadas Tone Control DAC. The specifications of this DAC are listed as:

Why can I stream a DSD512 file from my Synology NAS when my DAC only supports up to DSD256?

In Roon settings under device set up the Khadas Tone Control DAC settings are:

Why is Roon allowing me the option of selecting up to DSD512 and why is my DAC allowing an a DSD512 input to work?

Moved to support.
I suggest you post a screenshot of your audio signal path in roon. 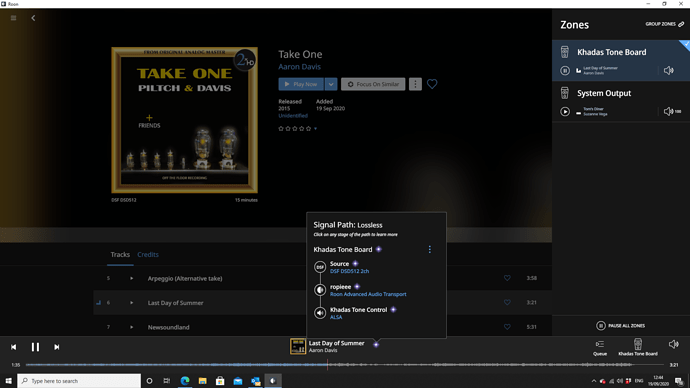 I have confirmed that when streaming the DSD512 file from my Aurender W20 there is no sound coming from the Khadas DAC. I can get audio out of the Khadas DAC when streaming a DSD256 file so I guess the Manufacturer is correct the maximum DSD file it supports is DSD256.

This leaves me puzzled as to why the signal path in Roon is showing the source as DSD512 and I am hearing music being played, Roon must be downmixing the file on the fly??

If Roon were downsampling on the fly, it would have shown up in the signal path.

This is my speculation based on a little bit of google and may well be wrong: I suspect later revisions of the DAC actually supports DSD512 but the manufacturer does not advertise it, possibly due to support / driver reasons, or don’t want to make early customers unhappy due to hardware revisions.

Anyone Tried a Khadas Tone Board? Tinkering

I have 2 units…both will run up to dsd512 no issues but I normally just run native rates. I use one on my Mac and another on RPi

As for why W20 limits to DSD256 but ropieee works at DSD512, the latter is using native DSD while the former is doing DoP.

Thanks for your reply most helpful.

I can confirm the W20 Arender does not output DSD over PCM (DoP) on the USB connector it only outputs DoP on the SPDIF connectors, I am using the USB connector. I can also confirm I have disabled DSD over PCM within the Aurender Conductor App. When I try and stream a DSD512 file from the Aurdender to the Khadas DAC I get no sound? I will ask Aurender if they can confirm the W20 supports DSD512 I’m sure it does as it displays DSD X 8 on the front display when trying to play the file.

So its still unclear why Roon is able to allow the Khadas DAC to play a DSD512 file?

OK Aurender has confirmed it can stream a DSD512 file so the Khadas DAC must max out at DSD256 which leaves me to believe Roon must be down sampling the file to allow the DAC to play music?

Roon must be down sampling the file to allow the DAC to play music?

This would have shown in the signal path. @wizardofoz @spockfish any comment?

As far as I can tell both my KTB’s play at DSD512 upsampled in roon. I don’t have any native content to try, but the signal path indicates as did the one up at the Tom of the thread it’s being sent DSD512

OK I have done the test again this morning I can confirm the KTB accepts a DSD512 file when played via Roon. When I stream the same file via my Aurender W20 I can’t get no sound out of the KTB?