Can choose Puccini: La Bohème [Highlights] which matches except for a few seconds on two tracks but than shows conducted by Walter Hagen-Groll. 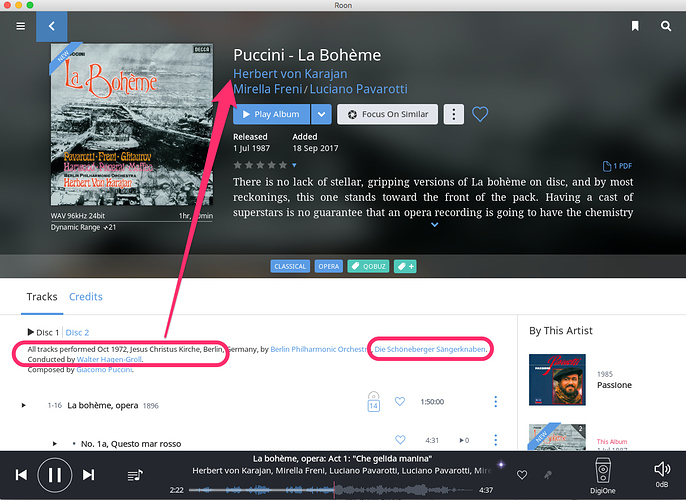 Hi Michael. I too have this album and see what you see. Unfortunately, this is simply a case of incomplete metadata. In general, the metadata for the album are very good, but von Karajan is only credited as Primary Artist for both album and tracks and not Conductor. Walter Hagen-Groll is the choirmaster, which falls under the Roon “Conductor” category, so that’s why we both see him as sole conductor at the top of the track listing.

The fix is to add Conductor credits for von Karajan for every track. The quickest way is to select all (Ctrl/Cmd+A) tracks for disc 1, add the new credit via edit, then do the same for disc 2. When you do this, he turns up alongside Hagen-Groll. If you don’t like Hagen-Groll showing up at all, you will need to remove his choirmaster credits.

you’d really want to see Pavarotti, Freni, Ghiaurov, et al in addition to Karajan. they’re the bigger draws for this set i think.

Correcting metadata on newly imported albums actually gives me something interesting to do, although it is sometimes very challenging to make compositions make sense.