I have a an Allo DigiOne Sig HAT and I’m running RoPieeeXL. In the previous releases, RoPieee would stop streaming and my DAC (Schiit Yggdrasil) would “go idle” when Roon stopped playing. With the latest release, the DAC stays active even when Roon is not playing. Is this an intentional change?

It was an intentional change, but in the next release this will be configurable as more people reported this to me.

I actually requested the feature for Yggdrasil because if the output goes idle, restarting streaming causes the Yggdrasil to click, and may lose up to a second the beginning of the music. This is very annoying for recordings which begin without any blank.

Interesting. I leave my DAC on 24x7 and I prefer the previous method. Maybe if the switch off was configurable it would be best, that way it would stay active until there was no signal for 5 minutes, for example.

Same here, who switches off those Schiit anyways?

I see the option in the beta version now perhaps you could give it a try.

This is exactly what the switch in the next version will do, where the default will be 'switch off after a period of inactivity.

In hindsight I was too quick with releasing this.

Hi Harry- I am running the latest beta and happy to report the behavior is back to what it was before, with the DAC going idle. I wasn’t sure if this version had a control in the settings UI to adjust the behavior, I couldn’t find any setting just poking around. 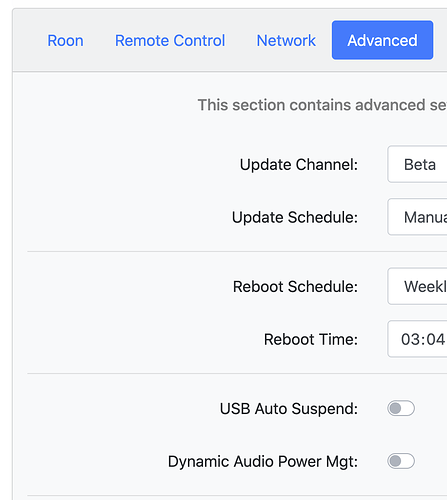