p.s. I just noticed that “Bryan Adams” got converted to “B. Adams” everywhere in my database!!!

Strange artist conversions have been happening over the last few weeks.

yepp … damn frustrating … roon does behave like a Dieselcar at the moment. It was sold offering something and reality shows differnt, it asks for manual corrections day-in day-out. I think I simply wait now … and I’m happy the important metadata isn’t lost since the good point with roon is it doesn’t write what I believes into the embedded metadata of the files. Means one day when theres a better solution next to nothing got lost.

I’ve been able to correct the mistakes that Roon is making by in going into Album edit unclicking the artists name in Primary Artist link saving that then bringing Album edit back and clicking on the artists name again. To bring the missing albums from Sting back I’ve gone into the Album category using the sort albums by artist then going to all of Sting’s albums and doing the same reset of Primary Artist.

Some of the albums I have are unidentified by Roon so re-identifying doesn’t work for me.

I’m able to correct everything but it’s a hassle when Roon decides to change things on it’s own. This has only been happening since the last update so I’m guessing this is related to the update.

I have been trying to, but cannot, find a way to find any of these “duplicate” artists. It appears you have to stumble on them.

After it happened a couple of times I noted the total Artist count from the main page, whenever that count goes up for no reason I figure it’s splitting artists. So far it only seems to be doing the ones I listed. The missing album issue I only came across because it split Sting, there may be more that I haven’t come across yet.

As Stefan said it’s a good thing it doesn’t change embedded metadata, that could be a deal killer for me. Hopefully the next upgrade will correct whatever is causing this.

Blame his lawyers for this…

@Ralf_Karpa Roon provides metadata as a service and metadata changes all the time as a consequence of raw metadata provided to us and changes in our backend processing. Sometimes genuine improvements to the overall metadata have undesired and unavoidable side effects — Bryan Adams being renamed is one of them (the root cause of which is Bryan Adams’ lawyers instructing removal of his metadata from AMG/Rovi/TiVo’s database) — but this is a rare high profile case, and we will fix it as soon as w…

Well after a week or so Roon strikes again. It has done the same splits, this time only affecting Richard Thompson, Rodrigo y Gabriela and Sting. Again losing all but one Sting album. I think this time it may have occured after Roon doing an automatic Backup. This is really annoying. I tried reidentifying the albums by Sting this time and it actually made things worse.

Thanks for letting us know of this issue. Can I please ask you to send us your database so that I can ask QA to take a look to see if they are able to reproduce? You can use these instructions to get your database over to us and if you don’t have Dropbox or Google Drive just let me know and I can provide an alternate upload method.

Thanks for getting back to me. I don’t have Dropbox or Google Drive so I’ll need the alternate method. I’m running Windows 10 on my computer if that makes a difference.

You can find the duplicates, if I understand your question, by Searching and starting to type the name. As soon as you see both names, stop, choose one and see if this is the the “real” one. If not, select all tracks (of the fake), and change them to the “real” artist. May take a couple of tries.

You can also Merge Artists but I assume you have tried that.

Just PM’d you the alternate upload method, please take a look when you can.

Since it is the same few artists who are being split at this time, finding which ones are split isn’t hard.

I’ve been chasing similar duplicate artist issues and find that artists that exist in different iterations (like Richard Thompson, Richard and Linda Thompson) seem to be causing the issues. (Prince, P and the revolution, p and the npg…) was the biggest mess I had

Once I unmerged and separated all of them, the duplicates seemed to vanish (I was up to 3 “Prince” artists at one point.)

I agree @Mario_Bucco, the Merge artist idea wasn’t likely to be successful.

I think what I did to fix this was: 1) to select all the tracks by the “phantom” artist and 2) delete then re-add the Artist Credits. But its been awhile. You might try that on a small sample.

John; I can fix the issue at least temporarily. The problem is that the issue returns, apparently whenever Roon Rock does an automatic backup or is reset.

Derek; It does not appear to be related to different iterations as most of artists affected don’t have that, at least in my collection.

From minimal acknowledgement by one of the Roon team, the split or phantom artists with missing albums issue may have coincided with a Roon back end metadata change. Further evidence of a behind the scenes metadata problem is that my film composer artist pages around the same time became littered with dozens of additional Tidal links that are absolute chaff. 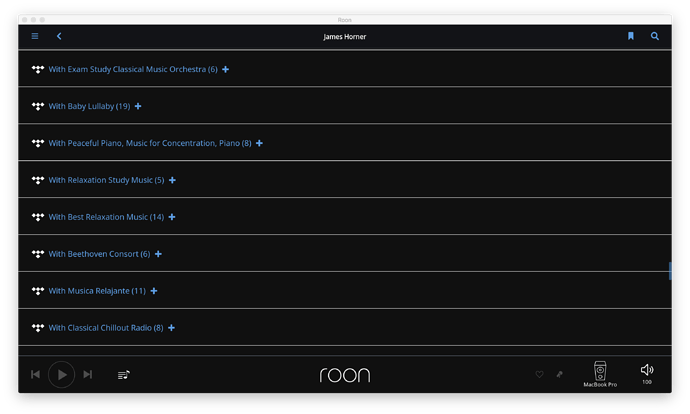 Too often, Roon leaves the low level customer support guys to respond to similar problem reports across multiple threads. That may be well and good for minor, individual concerns. But this is a fundamental, architectural issue. Roon right at the top really needs to cop to the problem and state how it is going to be fixed.

A post was split to a new topic: Albums missing from artist

Hi All,
Just to update you, the problem appears to be getting worse. Originally only Sting was losing albums when he was split into two artists. It is now happening to Richard Thomson and Count Basie as well. In addition John Williams, the classical guitarist, is now being split into two John Williams both with the same artist data.

Thanks for the update, @Mario_Bucco.

We currently have a ticket open with our development team regarding this behavior. We can’t provide any specific timeframes here, but we will be sure to keep this thread updated when we have more information available.

Thanks for your patience here while we are working on this!