Not relevant for this issue. Network is working. Qobuz and Tidal streaming is working.

Many thousands in Apple Music local library (AAC), which I hardly use since having Qobuz and Tidal.

Since upgrading Roon to the latest build last week, I no longer see all the Qobuz album versions for a given album. Here are some examples:

Interestingly, when I REMOVE this Qobuz album from my library, then Roon again shows the Hi Res album version (but not the 44.1kHz version anymore). See screenshot I took AFTER I removed the album from my Roon library: 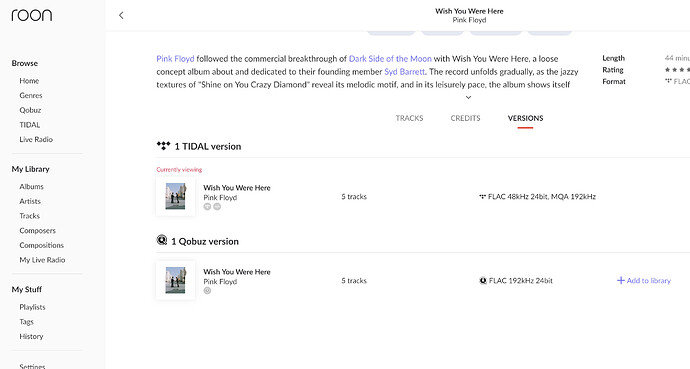 Sorry about the inconvenience with the resolution display you’re having with The Floyd catalog. If you play the version of Dark Side of the Moon that you have in your library and expand your signal chain viewer in Roon does it show 96/24 or 44.1/16? Thanks!