Try updating the Android version on the Yoga if that is possible Peter. It may be that is where the problem lies.

In theory it is passible doing update on this tablet. But in really world its impossible. I have try to do this for few hours and unfortunately I could not to do. I did step by step as it was explained on Lenovo website https://forums.lenovo.com/t5/Android-Yoga-Series-Tablets/Yoga-10-HD-OTA-update-failed/ta-p/1598190
Maby Im to stupid to do this:) I have no idea how resolve this problem. On the screen of Yoga I can see 98% of update progress and next is a fu… failure.

I don’t think it’s you. The comments on the Lenovo forum post you linked show many people are having trouble upgrading. The final comment appears to be a solution by rollback to Android 4.3 which then allows for updating. It might be worth trying if you were willing to take the risk of following user advice on that forum but I don’t know enough to judge or whether it would affect any warranty.

I have a yoga tab 3 10 inch that I am using as a beside device that allows me to run Roon as a remote and end point.

I do have a couple of problems though - first is that the Roon app defaults to the mobile version which makes it look ugly on a 10 inch screen (e.g. album covers too big). Second is that there is no way to select full screen for the app. I did actually manage to get full screen by accident when on initial start (once) the app told me my resolution was not high enough and to try full screen… I selected that and got the full Roon app (not mobile version) which was fine.

Is there any way of running Roon in full screen mode all the time on Android? OR make the album and other display elements smaller?

Hello, I have the same problem as jayrammusic. I should have googled for Lenovo Yoga tab 3 10 and Roon before but I was sure I won’t make anything wrong with a 10 inch tab

Well, I got my Lenovo yesterday and voila: the same here, the Roon app works in the mobile version look only. Also here, once (unfortunately only once so far) when I started the app I could select the full screen mode. It worked fine this way and I could use the ‘Now playing’ screen.

I wonder what to do now. Returning the tab or waiting for an app version that works with these Lenovos? Hmm… indeed I bought the tab because of its “foot”. Just for using Roon’s ‘Now playing’ screen (in landscape mode).

I too had the same problem. This post also discusses the problem

It relates to the DPI settings that Lenovo uses which make Roon think the device is a phone. I changed the DPI on the Lenovo (check the link) and was able to get Roon to run in Landscape mode. The tablet is now unstable fir other apps- I will set it back to the default DPI to prove this is causing the problem at some point.

Thanks a lot! Indeed the landscape mode works this way. Great! I still have not installed so much other apps. Just Roon and Orange Squeeze (I use a Nexus 9 lte for the daily use). The Roon app seems to be stable so far and it seems I should keep the Lenovo tablet.

Glad to have helped - I too use the Nexus 9 for everything else! The Lenovo tablet is perfect for leaving by the hi-fi - would be good if Roon had a slightly screensaver/now playing view.

I’m using one of these Lenovo Yoga 2 tablets with Roon and it works well (esp for a $99 refurb tablet). It has a nice screen and outstanding battery life. I don’t have any problem switching between landscape and portrait mode in Roon.

Thanks for the heads up - looks like a decent price. They are more than that in £’s in the UK!

I ordered a Yoga 2 8 tablet from an eBay dealer yesterday evening before reading Tom’s reply (also refurbished, 125€) with Windows 8.1 Bing version. Will be my first Windows tablet/phone. I am curious.

Let me know how you get on with the Yoga 2 8 and I may follow suit.

I got the Yoga 2 8 today. Funny how small 8 inches are compared to 10. Well, I cleaned the Start screen from all the tiles at first. Then I downloaded and installed Roon (Windows 32bit).

I just want this Yoga 2 8 for Roon only, so I moved the Roon desktop symbol into the Autostart folder: (C:\Users\AppData\Roaming\Microsoft\Windows\Startmenu\Programs\Autostart
Next thing (I am using a local account, not a Microsoft account) was to activate the automatical login by using the command “netplwiz”. Last but not least the tablet should boot into the desktop mode directly. I can not explain well all this in English but Google is a true friend in this case. 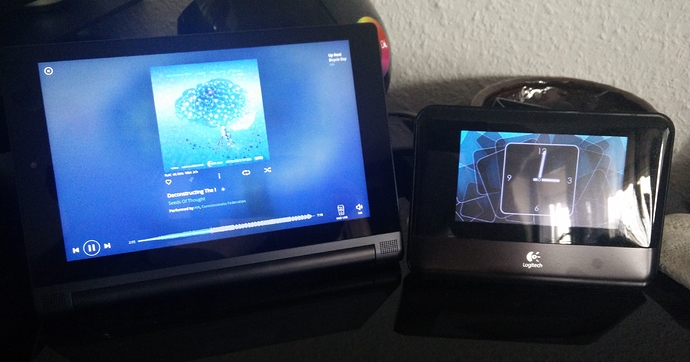 The full screen I received by accident. I already had activated the automatical hide of the taskbar. Only the upper frame of the folder “Roon” was still visible and disturbing a little bit. But when I was opening the virtual keyboard I was asked if I want the full screen for Roon. I accepted and now the full screen remains even after a reboot of the tablet. Not sure at the moment how I can reverse it but who cares!

I think the Yoga 2 8 was a good buy for this purpose.

looks - good. I love that you have the sbox for reference. I have ordered my Yoga 2 8 and will use it to replace the Sbox for remote control purposes.

two updates. First about the full screen. You can maximize/minimize Roon when you open the menu list. Just press this red encircled symbol: 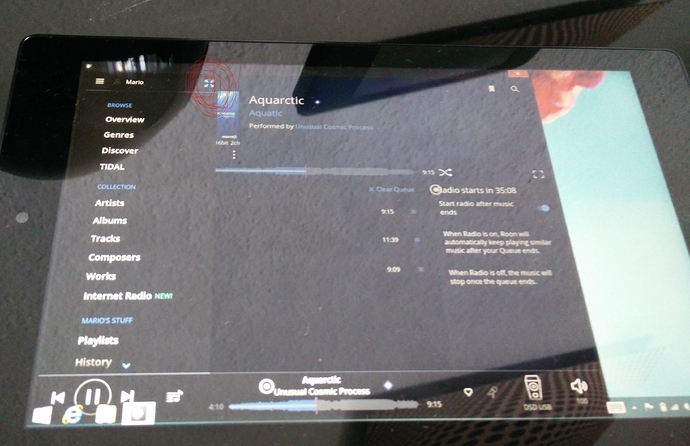 Second update, I will return the Yoga 3 10. Not that happy with the resolution when you activate “Allow for more covers and photos” in the General settings. At all the Roon handling via the Yoga 2 8 is much more smooth than with the 3 10. So, I will use the Yoga 2 8 also as remote control for now beside the Nexus 9.

My Yoga 2 arrived. I didn’t realise but I’d bought an Android version and I still had to make the dpi changes! It has been much more stable then the 10. I may buy another once I’ve run it in for a while.

I have mine playing in full screen. I don’t know if this can be avoided with an Android. My wish is that the now playing screen had the art work as large as possible so it’s visible from across the room!

Oops, it is really confusing with all these Yogas. Strange that you had to make the dpi changes again. I thought a full hd screen makes Roon start in the landscape mode, definitely. Hmmm… but then I have tested the Roon app with the Samsung Galaxy Tab 4 (10.1) from girlfriend yesterday. Resolution is 1280x800 (the same with the Lenovo 3 10). Roon starts in the landscape mode there.

[quote=“gmt, post:27, topic:9318”]
My wish is that the now playing screen had the art work as large as possible so it’s visible from across the room![/quote]
That’s my wish, too. Is there anywhere a list for feature requests? I am still new here.

My wish is that the now playing screen had the art work as large as possible so it’s visible from across the room!

You have Android, so I don’t know whether the UI is the same, but on my Windows Tablets you can do this.

In the Now playing (Queue) screen, click/touch the four corner icon (highlighted in red in this screenshot): 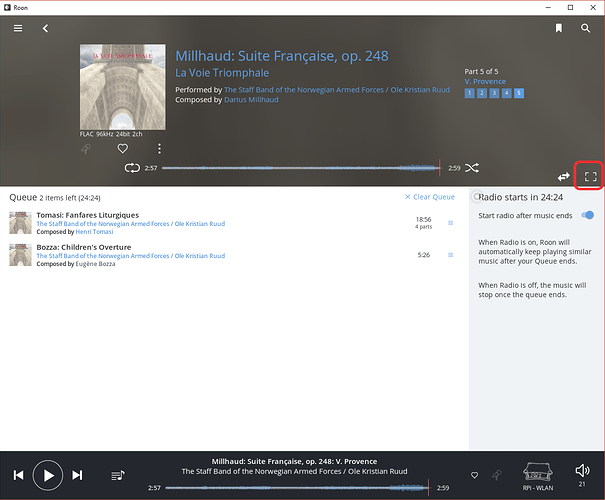 That takes you to the fullscreen version: 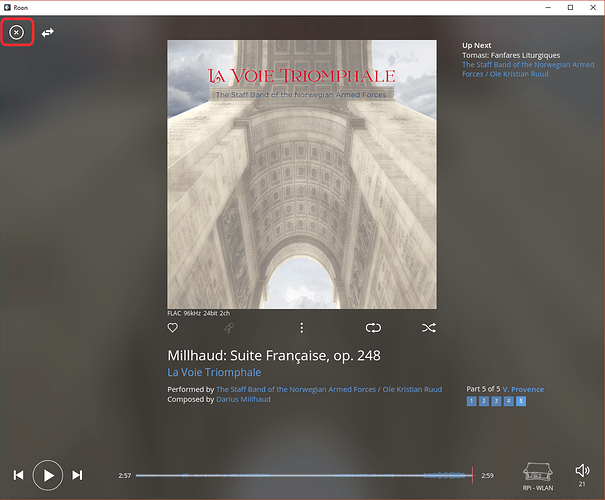 The cancel icon is on the top left (also highlighted in red in the screenshot).

Thanks for your reply. I was aware of this. I would prefer an optional view where the artwork is more prominent.
e.g. 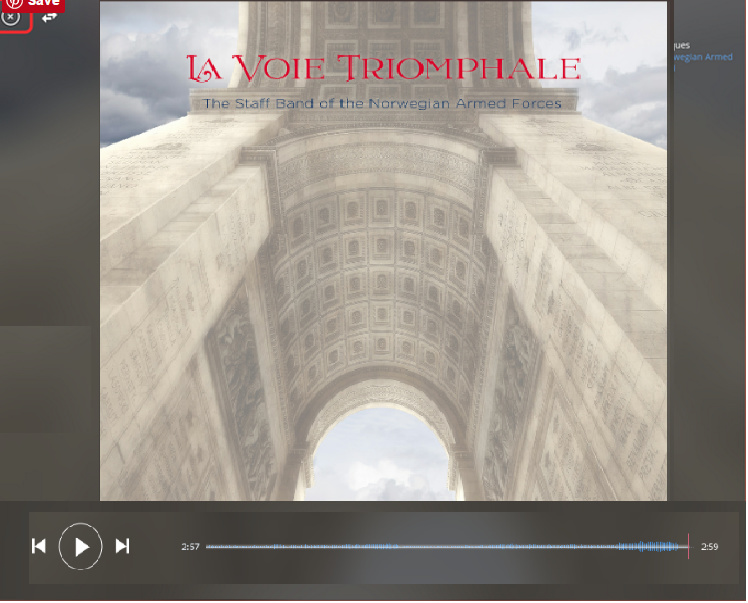