I’m trying to sort the albums out but Roon is posing problems.

Here is an example;
There are 3 discs in the subset labelled “Music for Piano and Orchestra, Vol. 2”
Roon correctly identifies the first two discs in that set but refuses to identify the third - 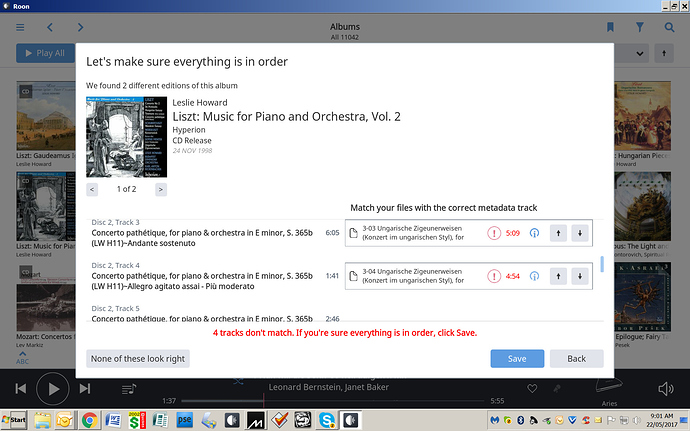 From here there are two ways to progress:

No 1:
As things do not seem in order (Roon is insisting there are only 2 in this 3 disc set) I have not accepted that “everything is in order”.

So, with Roon insisting there are only 2 albums in this sub set I run into problems trying to merge them as Roon will not allow 3 albums in the merger - 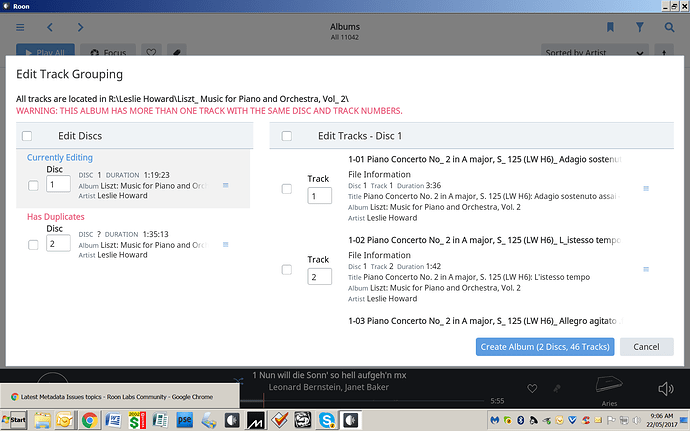 image.png1920×1200 206 KB
Allowing the duplicates for later editing and then removing those duplicates just brings one back to the same starting point.
The only alternative solution is to renumber the tracks so there are no duplicates so I’ve done this but am posting this to point out the incorrect identification by Roon.

No 2 approach [leads to a bigger mess claiming the 4 tracks are over 43 minutes long]
Accept that Roon is correct, although you know it is not, then that third disc is given an incorrect header: 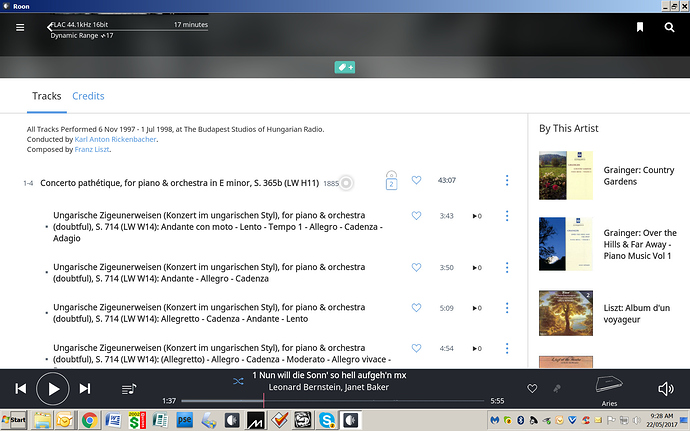 I tried editing the tracks using Stamp ID3 editor but that did not help.

I even tried deleting the album and reintroducing it but by this time Roon has insisted it should appear as shown above. There seems no way out of this but to accept it is only 2 albums and the tracks should be re-numbered.

However the incorrect track header remains in place so no progress has been made at rtemoving it.

FINALLY GOT IT
When identifying, by carefully matching the tracks Roon displayed on the left to those on the right, using the down arrows, the situation was finally fixed except the album no 3 of 4 tracks ended up with 12 because of repetitions. Once they were deleted the merge if the 3 albums into a set was successful.

But I do question, is this all necessary? Roon actually did finally show there were 3 albums in that set but initially seemed to insist there were only two. It does make tidying up albums in Roon more complex and time consuming than should be necessary. I suspect this is because Roon misplaces or loses data when albums are merged so that when they are unmerged a mess is created. This is a serious fault with Roon. Merging/collating albums in Sooloos and then reversing the procedure was dead simple without any such problems. It seems the basic structure of Roon is such that merging or breaking up sets messes up data and that is a big negative against Roon IMO.