@support any updates on this problem please?

Bang on, well said! Months later and these issues still remain and Roon is unwilling to address any of these problems. Endless lame excuses and non committal in any form of meaningful support.
USB Audio Pro puts Roon to shame. It’s a disgrace.
Roon is unusable on my LG V30 in any way other than as Roon Remote to control my NAS based Roon Core on my home system.
Roon make us jump through hoops endlessly in explaining the now well documented and exhausted problems that not just LG users but I suspect Android users experience.
Word of mouth and personal recommendations or condemnation can heavily effect a products success. I’m on several large audiophile groups and Roon won’t be getting positive feedback from me. I’m sure other users will take heed as I know several other owners of these LG phones.
Sadly it’s not even a case of too little too late fron Roon but more a case of Roon simply can’t be arsed. Roon has our money and couldn’t care less.
It’s the last subscription Roon will ever get out of me.

First off, apologies if anyone thinks we’ve haven’t been clear about this issue. We’ve spent time investigating this problem, and have provided periodic updates since the initial report. This issue isn’t being ignored.

While this may appear simple to resolve from your perspective, our investigation into these reports over the last few months indicate that resolving this will require a substantial rewrite of our Android audio infrastructure.

It’s always disappointing to us when manufacturers change something out from under us and cause Roon to break. These issues can be very time consuming to handle, and have to be prioritized based on the number of people impacted, especially in a fragmented ecosystem like Android’s where we have a relatively small number of people owning each device.

We do not see a way to fix this in the context of our current Android audio streaming approach–which was designed around the need to support older devices when we launched Android support in 2015. In order to move forward, we need to substantially re-design our interaction with Android’s audio subsystem.

In the context of that project, fixing the LG V30 is a side-benefit, not the main reason to do that work. Unfortunately, there isn’t a way to “pull forward” a workaround for LG’s behavior changes, so this fix is part of a larger project to modernize our Android audio system, and scheduling and completing large projects takes time. That’s why this work didn’t happen in 2018. Once our next major releases is out the door, we will be able to look at scheduling this again.

That’s the point I was trying to make all the way back in June – if this is a confined bug we’ll do everything we can to fix it. If this is environmental, we’ll do what we can to isolate the variables that cause this issue, so we can hopefully identify a workaround. And if this does require wholesale changes to our Android audio implementation, that work is also planned, but with a time frame that is necessarily longer.

Over the last few months we did add an LG V30 to our in-house testing gear, so we are now able to confidently work on issues like this in house. But for the moment, I just want to be clear that we are not wasting people’s time asking questions, and we are not ignoring this issue. We do plan to resolve this, and when we have more concrete timelines, we’ll let everyone know.

We appreciate everyone’s patience, and look forward to resolving this issue as soon as possible. Thanks and Happy New Year!

I have lately tried to use a lg v40 smartphone as a network endpoint through Roon to my hifi system. There is music but looking at the path it seems Roon is “degrading” the audio stream from 24 bit to 16 bit. Why is that?

I’m wondering about this because the Lg v40 can handle mqa format. 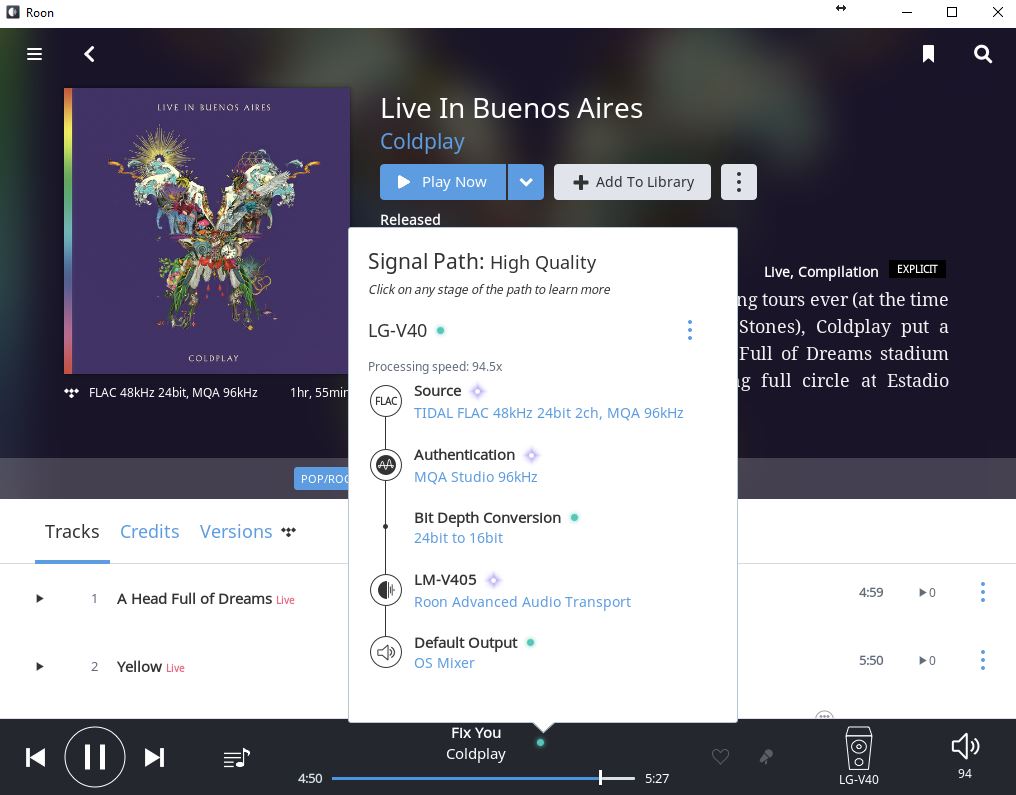 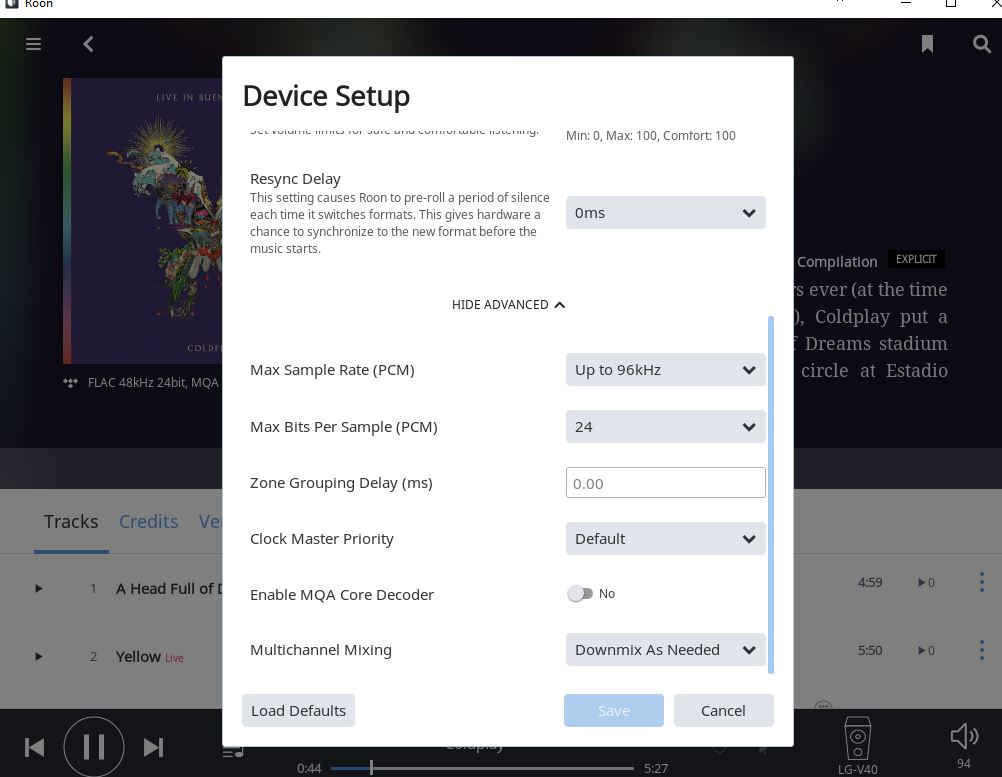 Read the thread above…

Well I have now. My post was merged with this one, hence I haven’t read it till now.

I don’t have the same issue as mentioned above. I get the music without stutter, pops and what not. Only thing is the degrading from 24 bit to 16, and of course that the full mqa is not delivered.

Thanks in advance for trying to solve the issue.

It was this bit, a little hidden I realise. This explains the resample to 16 bit.

You are correct that Roon does not currently play to anything but the Android mixer at the moment. I cannot make any promises that this will change, or give a timeframe for when it will be addressed, but we do plan on make improvements to this in the future.

Genuine question… I know support said the LG V30 problems are because of Android framework changing from older models but how come one man bands like UAPP and Neutron player can implement this so quickly and Roon can’t?

Again, a genuine question, not criticism

Changing a standalone app that does one thing is a different prospect to changing something that links into a whole framework of interconnected pieces.
Also, in the scheme of things, there may not be that many users. When you are doing anything in software development you start with the big bang for buck improvements and work your way down…

Is there any update on this issue, because this is a general Roon-Android issue and has been existing for a long time now

Yes, we are doing a complete overhaul of Android audio playback right now, following the Android infrastructure changes we made in our last release

We also have one of these LG phones in house, so we should be able to test the changes against these phones once that work is complete.

I don’t have an exact timeline for when these changes will be finished, and tested, and released, but we are actively working to improve playback on Android now, so expect some real improvements in this area in the future.

4 Likes
Stutters on all devices
Android app - Roon's Achilles heel?
Problem maintaining audio stream from core device to one Android endpoint
Hi-Res on Android? UAPP integration?
What is the best tablet for use with Roon?
Ronny_Ruyters (Ronny Ruyters) May 17, 2019, 10:40pm #55

Ok.
But this issue does not only occur on LG phones. I have it on a Oneplus X and a Samsung Galaxy Tab S5e, with and without using a Hidizs Sonata HD dac/amp connected in the USB-C.

That’s why they are “we are doing a complete overhaul of Android audio playback right now” but this thread started with the LG, hence the specific reference.

This issue occurs for me on the Pixel XL 2. Tried disabling battery optimisations, no luck there.

Just to emphasize to Roon that this issue is widespread, I am having the exact same problem on my V30. Not only with the clicks and pops, but a general lower resolution sounding and less detailed playback. The same streaming tracks on the Tidal app play beautifully with no issues. Idagio and Google Play Music are also perfect.

The LG quad-DAC series are gorgeous sounding network streamers and now that the V30-35 are available for $300 or less and can be used as Roon endpoints, you have a DAC-Streamer-Controller solution that is unbeatable in functionality and value, and compares well in sound quality with high-end devices.

But first Roon has to fix the playback issues …