Hey guys. I’ve heard wonderful things but I have questions about the Nucleus and how it would work with my setup.
Currently I’m running a Roon core on this Windows 10 PC.

As you can see, it’s a robust Windows 10 PC. I use it for all kinds of things. All of my music is stored on a NAS. My music library is huge! I have roughly 16TB of music stored on my NAS. I run Roon through HQ Player on my PC. It runs fine and never glitches. Anytime new music is added to the NAS, I drop the files into JRiver for metadata tagging artwork etc. I have a watched folder where everything shows up in Roon. Sometimes I make minor artwork/metadata changes in Roon but my system is pretty standard with JRiver for initial file loading.
Recently, I had a PC scare. I had to get it serviced as it would only boot to the bios page. I got in touch with a very friendly and expert guy who updates the bios and did a full cleaning and other things to help with the PC. Once thing he mentioned is my SSD drive is pretty full and I noticed Roon was taking up a big chunk of it. I imagine this doesn’t help my overall pc performance and this brings me to the idea of a Nucleus. I will start by saying I would want this to be an easy transition and more importantly user friendly. Currently with Roon Core on my Desktop (Ethernet Wired from my router). I have a usb output (curious cables) into my RME ADI Dac. Everything in my PC is transferred via USB. As mentioned Roon outputs through HQ Player and then out of the DAC into my powered Focal Solo6 Be speakers. It’s a great studio monitor setup. I have different endpoints all over the house using Apple TV boxes, Chromecast, Sonos, etc. that all works great too with my WiFi. But I mainly love accessing Roon on my main PC dual monitor setup and navigating with my mouse etc. I rarely use my iPad and only my phone for basic song navigation. Here’s my question. How does the Nucleus connect to my DAC? And if so, I only have one usb in to my DAC so I would lose all PC control if that’s the case. I don’t want that. My music would all still be stored on my NAS so I imagine a full roon backup before would keep all my folder settings. So, can anyone confirm how nucleus works with my existing PC and monitor setup? I think I may be a good candidate? I really just want to unload it from my PC and run it in the Nucleus for the best PC performance. I’ve read some stuff but I’m hoping someone can simplify. Thank you in advance.

As discussed in other posts, the best way to do this is to audition a Nucleus in your own system. With 16TB of music you would probably need a Nucleus +. You seem to have a handle on the migration process. So once the migration is accomplished, you can still use your PC as a remote to manage Roon. I mainly use a PC for that purpose because the IPad is just not as efficient as a PC with keyboard and monitor. You can connect the Nucleus to your DAC via USB. The PC is connected to the Nucleus over your network, so you can still use your PC as a remote. Or you can use your IPad as remote. That’s the beauty of Roon.

With Ethernet plugged into the Nucleus, can you connect wirelessly to it on your PC? That way I wouldn’t need the usb cable. I want my desktop pc to look exactly the same while using a nucleus.

Okay, presuming your PC is connected via ethernet to your network, if you plug the Nucleus into the network using ethernet, then both are connected to each other over the network via ethernet. USB has nothing to do with the network. It’s not a network cable. It’s a way of transmitting data to and from your PC or Nucleus to peripheral devices like a hard drive, a printer, a monitor, or a DAC. The Nucleus provides the digital music files to the DAC over a USB cable.

I’m not sure what you mean when you say you want your PC to look the same. Do you mean the Roon application on your monitor? If so, yes it will look exactly the same.

Edit - not sure how HQPlayer would fit into the architecture. I suspect you could continue to run it on your pc.

Andy is correct. My office system is connected to my Nucleus using my PC as an endpoint. The PC is connected to my DAC via USB. I also have a DAC directly connected to the Nucleus via USB in my music room where the Nucleus is located. I can also stream wirelessly to my Sonos Beam in the living room and various portable Sonos speakers I can put anywhere. I can also stream wirelessly to my IPad and my IPhone. Again, that’s the beauty of Roon.

It’s maybe worth mentioning that if you don’t need a silent fanless pc in a pretty case, ROCK on a NUC or Roon Server on a computer/operating system of your choice is functionally equivalent and (unless you get seriously carried away) much cheaper. It’s just a different set of compromises…

Yes, you can do it like that. Or you can connect the Nucleus to your DAC via USB. Either way. Either of these methods can be controlled from your PC.

Nucleus is the simplest and least complicated way to get Roon. The only thing to be concerned about is how well your USB connected DAC works in Linux as opposed to Windows. It also comes fully supported by Roon. Dedicated hardware, customised operating system that’ll never run out of space and your music on a second SSD. Once running it couldn’t be simpler and it will free up your Windows machine.

Time to understand the core components of Roon:
https://roonlabs.com/howroonworks

Right now your PC is acting as Core, Control (Remote), and Endpoint (Audio output). You want to move Core to Nucleus.

The PC can continue to function as Remote in both cases. Just make sure the PC and Nucleus are plugged into the same network router. Should just work (after migrating your DB).

Have Andrew Gillis at Small Green Computer build you a custom server that can handle your 16 TB files and use HQP 4 imbedded.

Ahh, 16 terabytes. Local storage on a Nucleus is a lot less feasible then!

Hey guys. I noticed while running Roon Core on my PC it’s using about 85% of my RAM.

So I think I need a Nucleus. See my screenshot for my current library size using files from my NAS.

I’m hoping a regular Nucleus would work. It would simply be Ethernet wired from my NAS. Please let me know if I’m good with the regular model. Attaching photo. 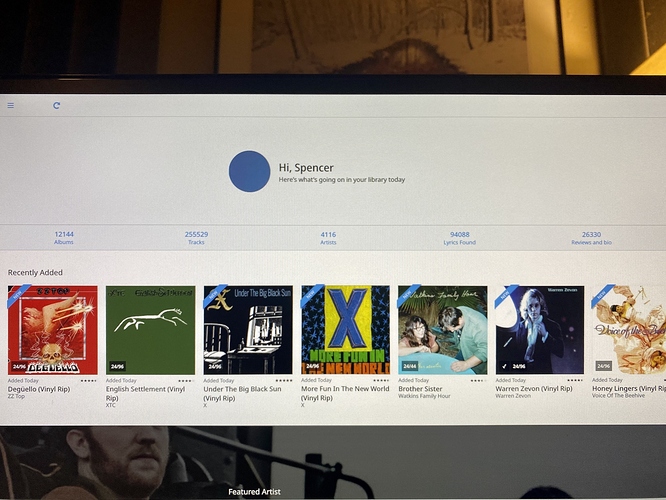 I noticed while running Roon Core on my PC

If it is just memory at issue, then increase the RAM. If the processor is a bit too slow, then get an i7 CPU, and more RAM.

A Nucleus is an i3 CPU. With a track count that high, you would probably be better off with an a Nucleus +.

It might, but I wouldn’t risk it with that library size. Go N+.

But the + is like double the cost. I can’t afford that. I’m baffled a Nucleus regular wouldn’t work with my setup. Ugh.

I’m baffled a Nucleus regular wouldn’t work with my setup.

you have a lot of music… like top 5% of all Roon subscribers – the cost difference is a drop in the bucket compared to how much music you’ve acquired… even at $10/album, the price increase of 78% between N and N+ is less than 1% of what you’ve spent on music.

Your current computer has an i5 cpu and is struggling. The Nucleus has an i3. If your i5 is struggling, going with a cpu of lesser power is not the right way to go. You need to increase you cpu horsepower, thus, the Nucleus + which has an i7 cpu.

Now, there are other ways to go, like getting an i7 NUC and loading ROCK onto it (get one on the authorized list). OR, you could just get a new i7 computer and use it. There is no need for a rack mounted one like you are currently using.