Link artist credits to specific songs, not just the album

Here is a good example:
I am listening to Toto. I like the sound from the drummer, Jeff Porcaro. I click his link and wow, he is on a lot of albums. Kudos to session musicians. One of them is Pink Floyd The Wall. I know that he played on the song Mother, but if I did not already know that I would have to check the credits for every song on that album to see where he contributed.
Can you look into the possible addition of listing the song/s they appear in the credits along with the album? It is really cool when you learn some of the back stories of how different artists cross pollinate with other bands and artists.
FYI… I love your product that you have here…

Roon allows for track based credits. If the credits are given, clicking on View All Tracks will open the tracks browser with a focus criteria for the artist already preset. So if the available metadata permits, you can already see on which tracks from your library an artist has performed. 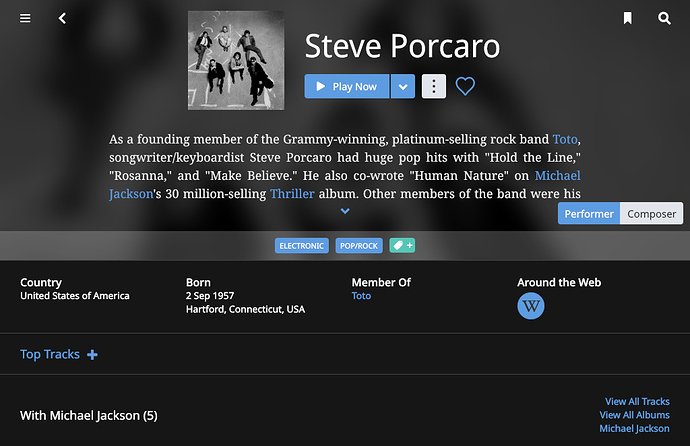 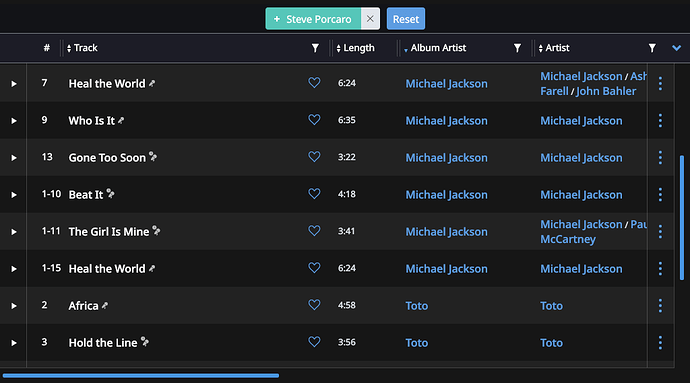 Your suggestion works in most cases. It looks to appears in most of the songs/albums that I have the music saved on my PC hard drive that is same as my Roon core - thus in the Appearances category… But… I also have the entire Pink Floyd Wall album on my hard drive and it did not detect it while Mr Porcaro is in the credits. Nor does it show the hundreds cases where it is in Tidal. There is no “View All Tracks”. I’ll play round some more. Maybe look to see if there is some way to force an update to the metadata into Roon. I know that it is supposed to automatically do this. 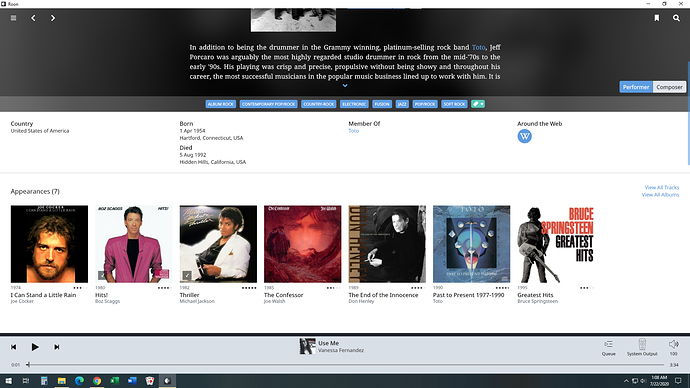 Something else that I noticed. I did an exact match to what you did and looked up Steve, not Jeff Porcaro. I got different results from you. More matches but no View All Tracks. Looks like I found a stumper… 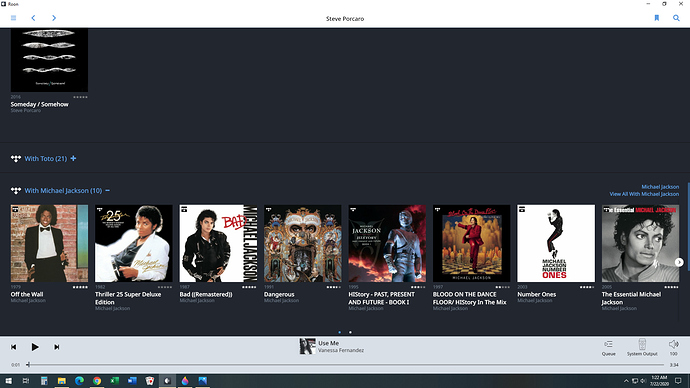 I see the tidal logo on all your screenshots but it has a reason that I wrote:

you can already see on which tracks from your library an artist has performed.

the entire Pink Floyd Wall album on my hard drive and it did not detect it while Mr Porcaro is in the credits.

Maybe album credit only (not individual track credits)? Track credits are needed for a track to show-up when clicking on View All Tracks. As I wrote:

if the available metadata permits

And there is no way Roon can know anything about appearances on tracks without track credits.