Just had my first experience of unidentified album hassle. Ripped a CD of a recording by the renowned cellist Paul Tortelier. Good metadata on the rip from dbpoweramp. Roon will not identify the album through its own data, but can see the main artist tag and tracks.

What’s reallly bugging me is that if I do a global search on “Paul Tortelier”, Roon will recognise him as an artist. If I tap on the main artist link, it then shows me all the Qobuz albums that feature him, but it will not include in that view the CD I have imported, even though it has his name as album artist. It’s been driving me to distraction to try and fix it. Is there a simple way to force Roon to recognise the import as being in the repertoire of the artist? I have many deep-catalogue classical CD’s not yet on my server, so hoping there is a way Roon can be convinced to connect. I like Roon in many ways, but this is an area where it falls over in terms of ease of use.

Here is the global search for the artist. The CD “Encores” is shown on the bottom left. Pretty promising. However, if I tap on the Artist photo to pull up his biog, the Encores album is nowhere to be seen (second screenshot). 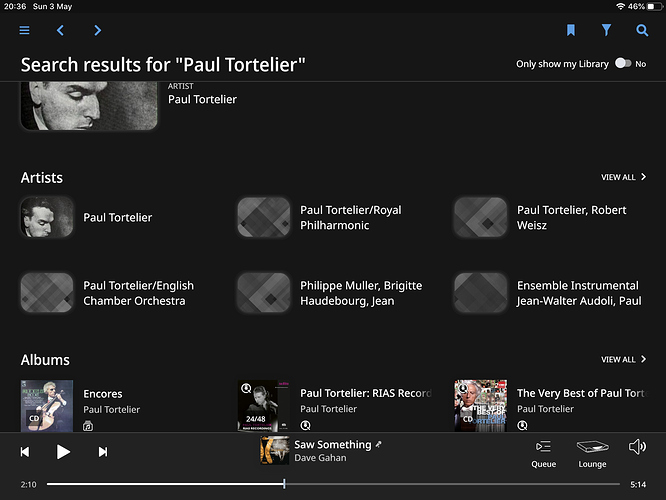 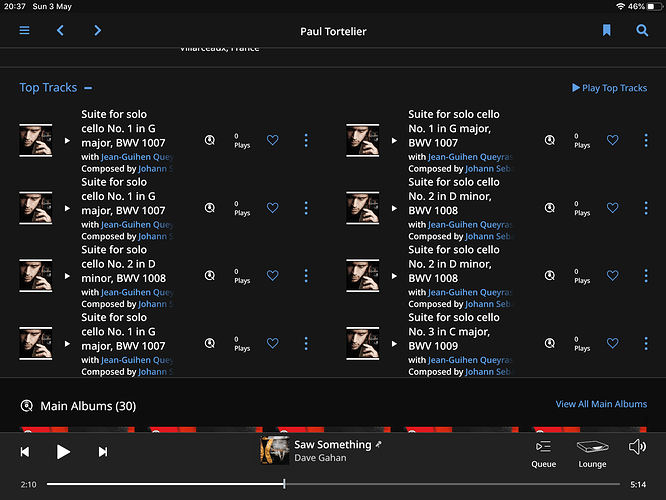 You’ve got a new, unknown, Paul Tortellier in your library.

When you imported an unidentified album, Roon was not prepared to associate the Paul Tortellier in your metadata with its own. Too cautious. So it created a new one.

Now when you search for Paul Tortellier the top result is the Roon one but the album results are ordered by Library first, Qobuz second.
In your library, there is an album by a “Paul Tortellier”, and while he is not the same as the “Paul Tortellier” of the Qobuz albums, it still constitutes a search result.

If you (temporarily, perhaps) add a Paul Tortellier album to your library, you should then see two Paul Tortelliers. In the artist browser, select them both and merge. You can then delete the added album if you wish.

Thanks @BrianW . Adding a Qobuz album to my library featuring Paul Tortelier did everything in one step. I still had one Paul Tortelier in my artist view, but now when I tap on his name to see the artist biog, the CD import is included as a main album so an auto merge has occurred. From a user perspective, feels like a bug if I have to trick Roon to fix this.

Just one further observation: if I did not have a Qobuz/Tidal subscription via which I could add a “valid” album for the artist, how would I have fixed this?

an auto merge has occurred.

Roon can be clever sometimes.

if I did not have a Qobuz/Tidal subscription

That’s a difficult one as a general search won’t go outside your library. The following is a guess and might work.

Identify your album against anything by Paul Tortellier. This gets Paul T into your library. Get some link to him for some credit somewhere else. Now try identifying your album again, properly. With a bit of luck, the real Paul T will remain in your library even when the album becomes unidentified again.

I haven’t tried this!

feels like a bug if I have to trick Roon to fix this.

Not a bug, but definitely a shortcoming. Its been brought to Roon’s attention in the past.

thanks again for the commentary on this. The first thing I tried before posting was to look at the album metadata tab in Roon and see if I could persuade Roon to accept that “my” Paul T was the same Paul T as shows in its general search, but to no avail. While I agree that this is not technically a bug, it’s definitely a design oversight, albeit one I’ve been able to work around with your help.

look at the album metadata tab

One might have thought so, but for the album artist that only affects the text of the name rather than the link - which is what you wanted.

There have been many posts making reference to Roon creating multiple instances of an artist and not making the connection. It is a pervasive bug, my merged artist list is extensive, as are the number of times Roon had incorrectly assigned a performance to the incorrect namesake.