Roon fails to play one certain track on one certain album, but this happens with all possible versions for that same album and track (local and Qobuz).

The album is Dave Brubeck Quartets Time Out and the track is the legendary classic Take Five. What’s weird is that every other track on that album plays fine through my own library and through Qobuz. But this one track doesn’t start anymore.

It used to play just fine and I’ve played it dozens of times since it’s one of my test tracks but now suddenly it’s not playing. Not sure if this started after the most recent update on Roon.

It does play when I change to other output than Linn Akurate DSM (for example my laptop speakers). It also plays through Linn Akurate DSM with their own app + Qobuz combination. Once again, it’s Roon + Linn combo and problems with playback.

I haven’t encountered this problem with any other track than this single track. Unfortunately I play this track a lot and really like it

I have logfiles at hand, just tell me who to send them to.

I’ve rebooted both Linn and core machine, no help.

This is interesting. I have a Linn Klimax DS, and have this album locally, bought ages back as a high res download from Qobuz.
I just started the album and scrubbed through most of the first two tracks to listen as Roon changed tracks.
The first two tracks seemed fine, but on changing to the third - Take Five, as you mentioned - I got this:- 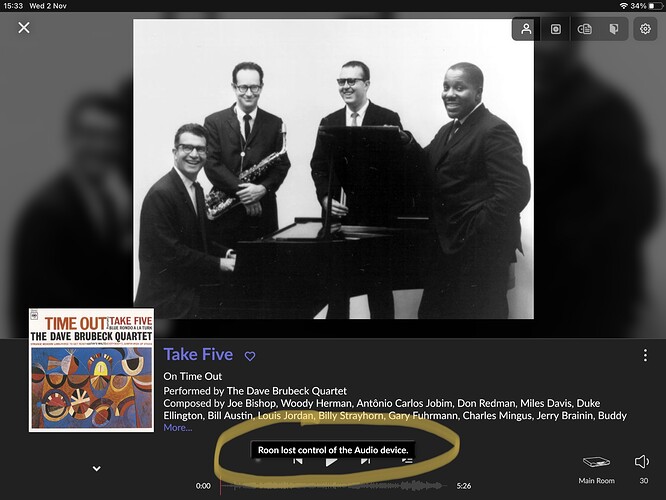 I shall be following this thread closely…

Just as a data point, like many I have this album favourited, just played it without issue.

Might be coincidental that you guys are streaming to Linn equipment and I’m not.

Just as a data point, like many I have this album favourited, just played it without issue.

Might be coincidental that you guys are streaming to Linn equipment and I’m not.

I’m currently demoing a Holo Spring 3 and this track plays just fine through it. This problem is clearly specific to a combination of Linn + Roon.

This problem occurs with bitperfect signal path as it does with Roon DSP enabled.

It does seem odd, though - as @patouskii says in the original post, the file plays fine using Linn’s own control point and server.
I have nothing set in the signal path at all. I’m not at home at the moment but when I’m back I may try a FLAC-to-FLAC conversion of the track with dBpoweramp to see if that removes anything that the DS doesn’t like.

I’m currently demoing a Holo Spring 3 and this track plays just fine through it.

How is the Holo connected? USB from the Windows 11 Roon Core?

Yes exactly like this. Core running on NUC 8i5.

Addendum: we’re currently at our weekend apartment. Here we have a Linn MDSM. Take Five plays perfectly via Roon…

Yes, as I described in my very first message, it plays just fine on other endpoints but not on Linn. Then again it also plays just fine on Linn ADSM/3 over Linn’s own streaming app. So obviously the problem is Linn streaming over Roon. This is not the first time this combination has problems.