Was recommended by Linn support to check the status of Subnet for Linn Streaming in Roon. The subnet that shows up in Roon is completely different than the subnet that the DSM is on.

What to do about it?

The DSM only shows up as an Airplay device in Roon. Screen shots of Roon setup page and DSM from Meraki attached. 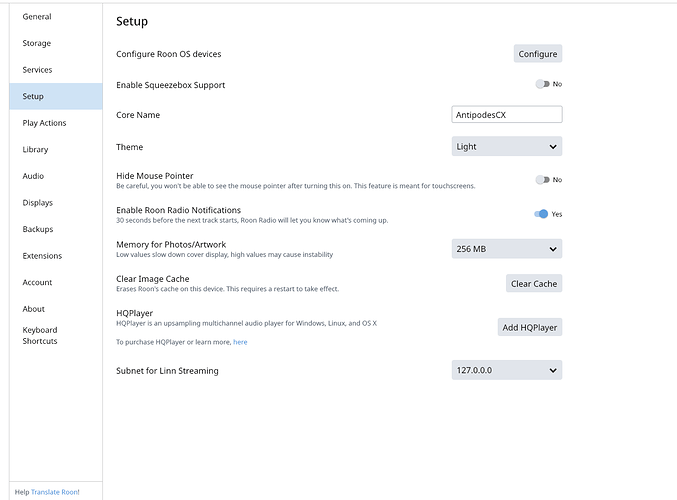 It looks like the correct subnet for Linn should be 192.168.2.0 according to your screenshot.
Are you able to press the drop-down and select this subnet?

Can you try rebooting the Core and networking gear? Where is the Core / Linn connected? Are they on the same network switch?

I can re-boot it but it’s already been rebooted several times this week because we had to move the location of the server that runs Core. Both are plugged into the same network switch. I don’t like rebooting that one too often because then it takes down the entire store. However, both are definitely on the same subnet. FYI, the Linn app works the Linn DSM just fine and Roon is working fine with all our other Roon capable devices. The only reason this came up is I complained to Linn that the only way I could get Roon to work with Linn was over Airplay. Since Linn don’t implement RAAT, what other transport can be used?

Instead of power cycling the Core, can you try to reboot RoonServer via the Web Interface and see if that helps?

So just for fun I rebooted the server with Roon Core on it and the correct subnet showed up. Who would have thunk it.

So if it’s Roon Tested, what audio transport will Roon use to send music to the Linn?

I have a Linn Klimax DSM that I control from Roon. Linn has its own proprietary “Linn Streaming” RAAT receiver. I don’t know any details of its innards, but it works well.