Hi
I have been listening to roon core on my imac for about a year and a half and I have been very happy with the sound quality
Just for the experience I wanted to check out the linux server so I set up my mac to duel boot ubuntu and installed the linux server on it.
I used my iphone as the controller and actually got it to playback some 192/24 streams from qobuz.
I have to say it sounded terrible as there was almost a night and day difference in sound quality between the mac roon & the linux.
btw I have a very transparent system that highlights the playback good or bad.
Can anyone provide some information what might be the reason/s for this SQ disparity ?
Thanks
Bob

What are you playing to and through what connection?

Also, it would help if you show ‘Signal Path’ from both.

Once the data leaves the mac all is identical.

One of the reason we are asking is that there may be multiple reasons. For example some devices have poor Linux support so it would be good to know exactly what the chain is.

That doesn’t make any sense. Linux has excellent hardware support. Any lack of support will make whatever component is lacking a driver simply not work, it won’t work with degraded sound quality.

Issues with hardware compatibility are typically limited to suspend / resume, some wireless chipsets, and some older audio cards (you should be using a USB DAC anyway, which will all work just fine with Linux), and some older graphics cards. None of that will affect Roon’s sound quality.

My point was that it’s impossible to tell what the problem is due to lack of information.

Why run linux on the Mac? Its designed to perform at its best with MacOS. I would stick with that. Linux is great for SQ so likely a configuration issue but I would not say it’s any better than MacOS.

My thought is the sound quality should not be affected as the data being sent from the imac should be the same and it seems to me that it should be processed at the dac in the same way resulting in a similar sound.

Last year I dual booted windows using boot camp and installed roon core and even though the mac side roon core did sound better the windows side roon core was a lot closer in sound quality then the linux server is now.

Ben I understand what you are saying. I think it is an issue of compatibility with the linux code and the mac hardware. Just as you stated that there are issues with suspend and resume ( they work but not perfectly ) I am thinking that same type of flawed synchronization may be effecting the sound quality.

The question is would this lack of sound quality be eliminated on a preloaded linux box ? I am thinking Yes definitely.

Just checking Linux out for the hell of it. What sort of configuration issue ? Can you elaborate ?

We don’t know until you show or tell us how your connecting it all together. Signal path gives us clues, are using a usb DAC into computer or playing over the network to Roon Ready endpoint. Linux had different support for DACs than mac so this could also play apart depending on the DACs Linux support. Help us to help you by providing more info of the setup your using.

It is actually being played over the network to a roon ready dac. The dac I am using is a ps audio dac with a ps audio bridge ll network bridge card (card located inside dac ) As far as I know it will support linux natively.

No reason why it should sound worse then over the network did your restore your library to it? Its not still processing the library or anything? Other than that something may not be right in your signal path. What’s this say?

@bokat57 maybe there are some internal limitations on the Mac when running both Linux and Mac OS? Maybe CPU issues or memory ? I went from running Roon on my Mac to a Nucleus. No difference in SQ.

It’s not even clear to me what “sounds terrible” means. Is it quieter? Is there noise? Does playback stutter? Is there an echo?

I can’t see how anyone can help you with so little information. I do agree, there’s no technical reason why the sound quality should be any different. Roon is, in theory, delivering bit perfect content to your network streamer in both cases. Of course, without seeing the signal path this is just the assumption/expectation. There’s no way for us to verify that this is correct.

maybe there are some internal limitations on the Mac when running both Linux and Mac OS? Maybe CPU issues or memory

I don’t think so as I am completely booted into the ubuntu partition the mac side should not be using any resources.

I went from running Roon on my Mac to a Nucleus. No difference in SQ.

That is very useful and interesting information.

It’s not even clear to me what “sounds terrible” means. Is it quieter? Is there noise? Does playback stutter? Is there an echo?

Of course, without seeing the signal path this is just the assumption/expectation.

I outlined the signal path and the set up earlier in this post.

“reduced sound stage” doesn’t actually mean anything to me. But anyway…

I outlined the signal path and the set up earlier in this post.

When people talk about the signal path they mean what does Roon report as the signal path. They aren’t just talking about the architecture of your system, which doesn’t actually tell us anything.

If you could include a screen shot of your signal path in both operating systems, that would help a lot. Something like this: 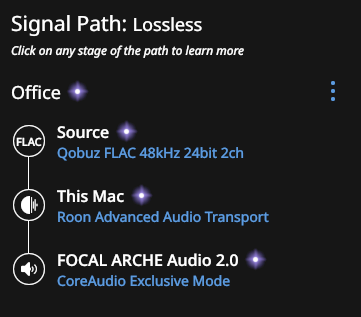 When people talk about the signal path they mean what does Roon report as the signal path. They aren’t just talking about the architecture of your system, which doesn’t actually tell us anything.

As I nuked the ubuntu partition I can not send you a screen shot of my roon path. How ever I can tell you from memory it was identical in both os’s. It also showed the same khz and bit rate in the dsd dac readout from both os’s

May I suggest to you that roon signal path is basically a pared down representation of the system anyway.

It is my belief that the problem starts before it ever gets to that signal path.
What I am trying to understand is this SQ disparity because of the ubuntu software not completely syncing with the apple hardware ?
Would I get a better result with a dedicated linux box ?

“reduced sound stage” doesn’t actually mean anything to me. But anyway…

I use the term sound stage as how far the music ( with a good recording ) extends beyond the outside edges of the speakers and from front to back.