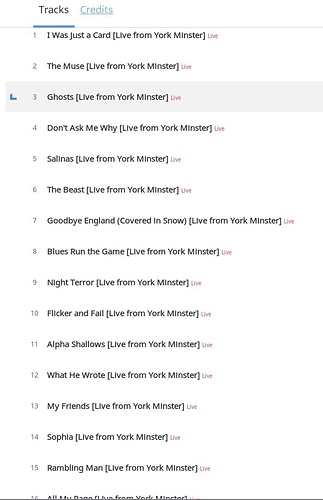 not the first time, though, I encounter this “glitch”

I disagree, you need this info in the track name, because if you play in shuffle mode you would not know the difference between the live version or studio one.

But in radio mode, that does not show up.

you can still guess it from the final applause

…more metadata info is ALWAYS better than less… what if this live track comes up in radio mode and you are not sure if you want to add to your queue, you have NO idea which version it is (live or studio).

The “Live from …” is embedded in the track’s name as part of the meta data. Occasionally I see this same appendage in the downloads I get from ProStudioMasters. Usually it is just in the file name and not the actual track name but sometimes its in the track name too. Just edit the tracks in a meta data tool to have it read what you want.

Roon identified the album so… it all comes from Roon metadata

(already told Roon, btw, to use files’ tags and everything looks clean as it should as I always inspect and edit/fix files’ metadata before adding somethig new to my library

@pl_svn Hi Paulo. The track titles come to us “as is” from our metadata providers. If we detect additional track information like [live] then - where possible - we’ll replace this with the “live” flag. However, we leave the [additional info] in place when there is clearly information that we feel has value. I agree that, in this scenario, it doesn’t look great and that it would be better if we could abstract this information somewhere else when it applies to all tracks. At the moment though, we don’t have a place to put such information.

I’ll make a note of this though; thanks for pointing it out.