Local artist misidentfiied as artist with the same name

I have a local artist named David Marks which Roon is confusing with David Marks from the Beach Boys. How does one separate them?

I’ve no idea whether equivalencing is happening on the client and or in the metadata cloud, @joel suggested I raise it here.

So nothing is identified, I assume?

If you add a new main performer with the same name, does that not do it?

The album is misidentified as belonging to David Marks of the Beach Boys. 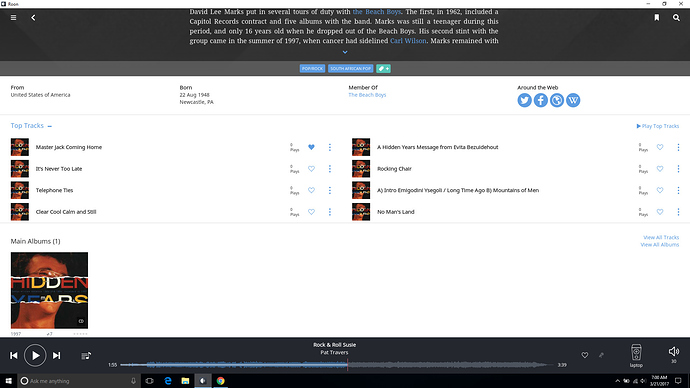 Have done that, now there’s a new David Marks, but all album tracks still refer to David Marks of the Beach Boys.

Have done that, now there’s a new David Marks, but all album tracks still refer to David Marks of the Beach Boys.

You may need to switch track performers over too. Just select all the tracks, remove the bad credit, and add the right one.

This is a tricky case, since if David Marks 1 (the Beach Boys guy) exists in your library and you add an unidentified album by David Marks, Roon will assume these are the same person.

We need an identification to get this right, but that may not be possible for the lesser-known David Marks 2.

Assuming that David Marks 2 is the main performer on an album in your library, and David Marks 1 is not, that sounds right.

They’re all performers, but performers that have Main Albums in your library are considered Artists.

Thanks Mike, changing primary artist in the track credits got it sorted. In situations like this it’s clearly crucial that there’s artwork for the artist otherwise there’s no way to distinguish one from another when adding primary artist credits.