When your library is in album view, only the Qobuz icon is displayed, not the local library icon.

Because of that, there is no way to know if the Qobuz version is grouped with a local version (unless you click on the album and look for the version tag).

Many users may have both a local and a streaming version of the same album grouped together. The way icons are displayed makes that invisible.

Hi Benoit - I’ve moved your post across to the Feature Request category. I did this because Roon is working as designed at the moment; when browsing the library, showing the Library icon is considered to be redundant by the Roon Labs team, so it is not displayed here.

So your post is a request for a change to the current behaviour. Thanks.

Worth clarifying that there is no such thing as a “local” library icon (to represent local content). The library includes all local and streaming service content additions.

there is no such thing as a “local” library icon (to represent local content). The library includes all local and streaming service content additions

I know that. It seems you have not read my post entirely.

Let me be a bit more clear:
– The room library includes both local and non-local files
– A library album grouping 2 versions or more is displayed as one single album
– In that case, only the Qobuz icon is displayed
– When viewing the thumbnail grid, it is, therefore, impossible to know whether an album with the qobuz icon also has a local version grouped with the qobuz version.

I think this behaviour is misleading, so you may of course consider it a feature request but it may also be seen as missing information.

I totally agree with you!!

It’s not quite as you describe it. The Album browser shows the Primary version of an album in the case where there is more than one version in the library. So, only if the Qobuz version is Primary, then the Qobuz icon is displayed.

Let’s take the Agrippina album as an example. Here’s what I see in the Browser:

No icon, because the Primary is a local album, with the FLAC files in my local storage: 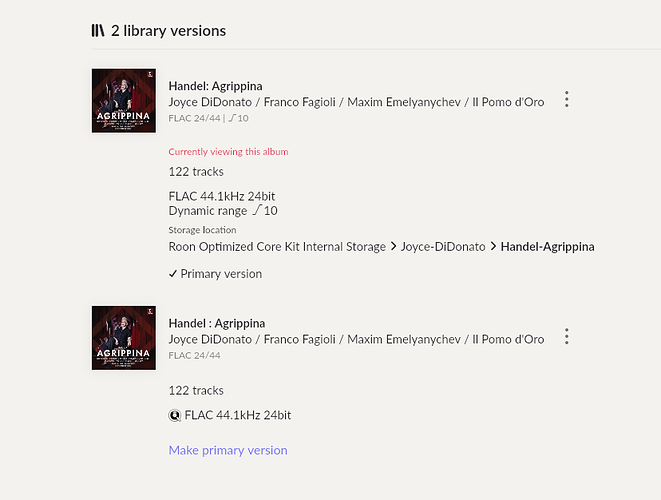 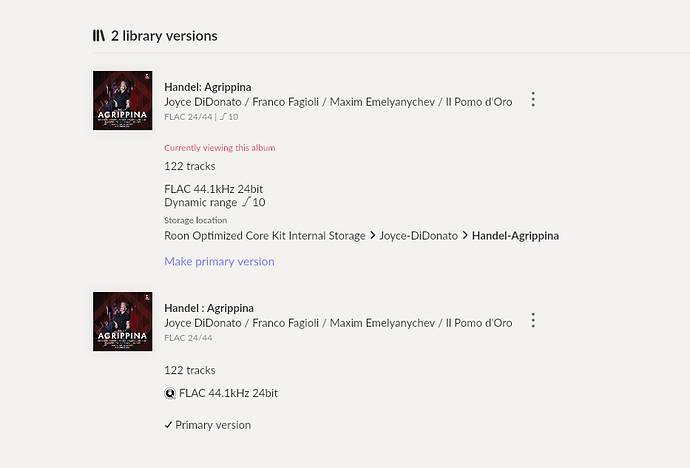 So it goes both ways:

If you decide to group two versions together, you probably want to see that you did it without having to click on the album thumbnail and check whether there actually is more than one version.

If you have not yet decided to add a second version to an album, you probably also want to see that it is not there.

Under the current system, you might try to add a version that has already been added. You might also think it is there when it is not.

I see that the Qobuz album is now the Primary version

You actually do not see that it is the primary version. You only see that it is in your library. There is no way to know that there is another version grouped with this one without clicking on it.

You actually do not see that it is the primary version. You only see that it is in your library. There is no way to know that there is another version grouped with this one without clicking on it.

So, in effect, your request becomes for a new icon to show that there are multiple versions present of an album (when the “Show hidden tracks and albums” setting is off)…

new icon to show that there are multiple versions

This is one option, but it is not the only one and it was not my request.

I know it may look partially redundant but it would obviously add much clarity to the information displayed, with no additional coding or design.

As far as I can see on this forum, that would also avoid having to answer repeatedly to the same questions from users expecting ‘local’ to be displayed.

And for those who have many versions of the same album in their library? What do they do?

I hear you, but I think that the range of use cases here makes what appears to be a simple request to be rather more complex than at first sight.

At any rate - the decision rests with the Roon Labs team.

And for those who have many versions of the same album in their library? What do they do?

There is no obligation to group multiple versions of the same album, but if you do so, you may want this information to be explicitly displayed. I do not suggest to identify every single version with an icon. Only to show whether they are local, non-local or both.

If you prefer to treat multiple versions separately because you feel they are too different to justify a grouping, this is equally fine and the change I suggest is not going to impact your choice.

the decision rests with the Roon Labs team

I can only agree on that one. This is precisely the purpose of my original post: check whether roonlabs could consider what I think would be an improvement of their product.

For me, I initially thought there was no benefit in displaying a local library [file] icon "as it was redundant information], but I had not consider the case that @BENOIT_MACHUEL makes concerning grouped album versions.

Taking that in too account, I can see the benefits, at a glance one can see I have this album [in my library] from these sources (Local, Tidal, Qobuz).

What I’m not sure about is scalability, at present there are only these 3 sources, how would it work if there where 10, should Roon display all 10 icons? Now taking a pragmatic approach, it’s unlikely that a Roon user would be subscribed to more than 3 or 4 so I suspect that’s perfectly manageable.

And if viewed not acceptable, by Roon, then maybe a “local” + a new “multi-source” icon is displayed rather than all of them once a certain threshold is reached.

Summary I feel this request has a lot of merits.

at present there are only these 3 sources

That’s what I meant by potential complications, and why I proposed a simple “multiple versions exist” icon… For example: 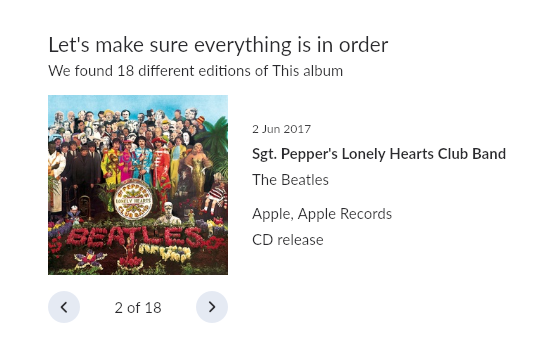