I installed Roon 2 days ago to try it out for 14 days and it worked perfectly for only one day. I don’t know what happened but I lost the This PC zone so only left is the Chromecast Audio zone. Another weird issue is that there is a small microphone icon next to a circling arrow in the lower right corner. These icons appears to only be in Roon as I do not see them in other applications. Also, they are like OSD which sits on top of the program if I can call it that way.

The circle changes periodically to a pause icon. There seems to be something conflicting with Roon or it’s a function I do not know about. The thing is that these two issues arise at the same time.

My PC is a i7 6700K 4Ghz with 32gb DDR4, GeForce GTX1070. Win10 is installed and up to date. I have been running this PC for 2 years without any issues. I have a Asus WiFi AC card installed and my router is Netgear R7000. For my sound output, I use a pair of Seinheiser HD 4.40 BT with an Asus USB-BT400 adapter. As I’ve said, everything was working just fine after I installed Roon so I am not sure if this is related. My library is about 130 ripped CD in AIFF and are stored on my C: (samsung 950 Pro M.2).

Thanks for contacting us regarding this issue. I did a quick google search and found that those icons are related to Nvidia Shadowplay, more information can be found here. As for your PC zone disappearing, this would most often be atributted to some kind of firewall or antivirus blocking Roon.

Can you please confirm that you have both Roon.exe and RAATServer.exe listed as an exception in your Windows Defender firewall using these instructions? After making sure that Roon is added as an exception you can click on the Sous-sol icon and you should be presented with a zone picker where you can select other zones.

For issue no. 1, you were correct. It’s related to nvidia GeForce Experience. By pressing alt-z it prompts the OSD. Probably either my son or me pressed it accidently. I just restarted GeForce experience and it went away. The program was acutally waiting to record a gaming session but I believe it got stucked since I even powered off my PC and it didn’t go away. Now it’s fine for this.

For the second issue, I activated both private and public exceptions in windows defender firewall.

I restarted Roon afterward and the program indicated that no sound device were found but there was that blue bar at the bottom of the screen, which I pressed. Then I can see my audio devices, after a few tries and reboot, I was able to click on my Senheiser BT 4.40 headphones as audio device but it didn’t work. Something is conflicting with the audio devices but I cannot figure out what exactly. If I wait a few seconds, all the audio devices listed simply disappear with nothing left to do. 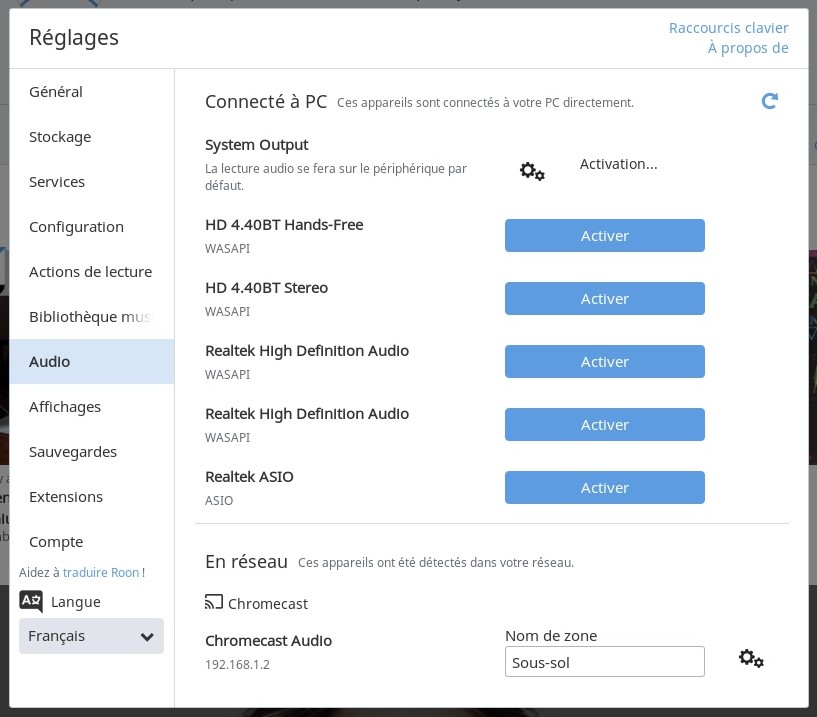 Glad to hear that the first issue was due to NVidia Shadowplay and that it has been resolved. As for the stuck on enabling issue, do you by any chance have any antivirus or other firewall applications which could be blocking Roon? I have seen McAFee, BullGuard and Little Snitch cause similar behavior in the past, so if you would like to verify that this is not the issue here I would suggest disconnecting your PC from the network and temporarily disabling the Antivirus to see if that changes anything. Once we can confirm it’s due to the antivirus used, we can add Roon as an exception.