Been testing this for a while; not sure if it’s a 1.8 issue, but I only noticed it recently.

Let’s say i have two of the same album in my Roon library. One from tidal/qobuz, and one I ripped from a CD.

If I search for that album, ONLY the streaming version is found in my library. Even when I click on the album, and look at VERSIONS, my local file is not found.

If I DELETE the streaming version, then my local file shows up.

One thing I could imagine is if the local version is a “regular” release, and the streaming version is some kind of deluxe or anniversary release, like, say “Workingman’s Dead”. The 50th Anniversary version (qobuz/tidal) shows up in a search, but my local/ripped file is nowhere to be found. It only shows me the “top result.” My local version is NEVER in that top result, and it’s not listed in “other versions” unless I delete the tidal/qobuz version.

I can furnish screenshots if necessary, but wondering if this is a known issue, and how to remedy.

I have a similar issue (although I did not try to remove the Qobuz version from the library):

yeah, i tested again with just the basic versions of Workingman’s Dead.

If I add another version to my library, ONLY THAT VERSION will then show in my library. My ripped version goes away.

The only way I can find it is to go to tags (where I’ve tagged all ripped albums as “CD RIP”) and then filter for Workingman’s Dead. Then it shows up in my library – but the streamed version doesn’t. It’s available, but it’s not in my library.

another example (there are a lot, but here’s an easy one to illustrate, and it’s one where NONE of the streaming versions are in my library)

Tony Allen discography, Secret agent (I have ripped the CD to my library) 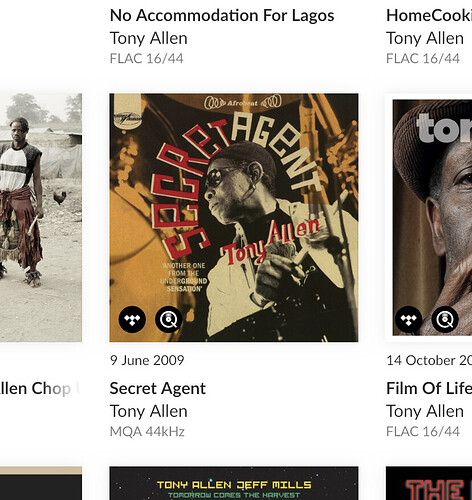 Clicking on “versions” gives me only Tidal and Qobuz versions, but not my local version 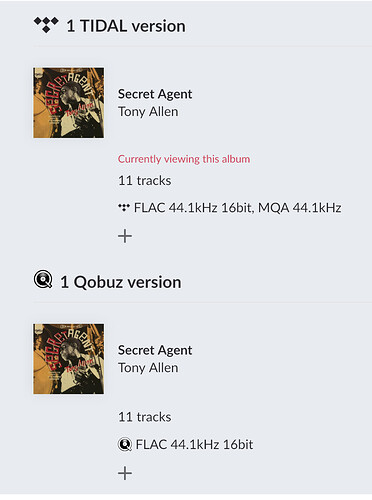 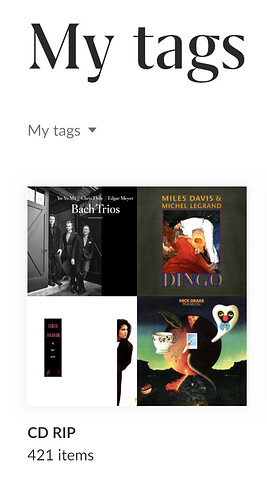 Then it shows up in my library. 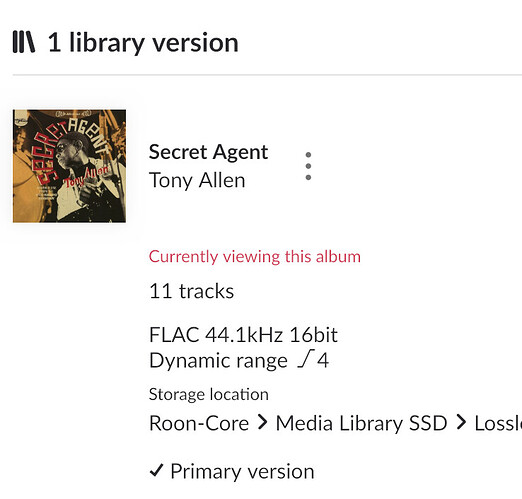 We have some information about this in our Help Center, including instructions to group versions that are not currently grouped:

Thanks, but where is this? in the FAQ it talks about grouping alternate albums into a set. But not seeing this ability in Roon. 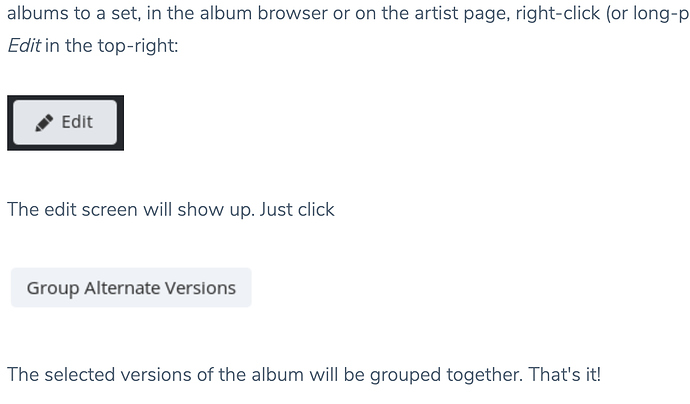 When browsing your library Roon hides duplicates by default, but you can turn this off at any time from the General tab of Settings by toggling the Show Hidden Tracks And Albums option.

Why does this not address your issue?

Versions are duplicates. Only the primary version is visible, the other ones are hidden. Search and focus can only show you the primary version - hidden albums can’t be found or shown. There is no special treatment for streamed albums versus local ones in your library. Search can also return streaming albums though, but they are possibly not the ones in your library (see: What’s the difference between albums in my library and albums outside of my library?)
If this is not what you want, got to settings and turn on “Show hidden tracks and albums”.

It’s still in 1.8. The Help page needs to be updated to reflect the redesign of 1.8.

The Edit button is no longer at the top right of the Roon screen, but has been absorbed into the “3 dots” menu that appears when you select multiple albums: 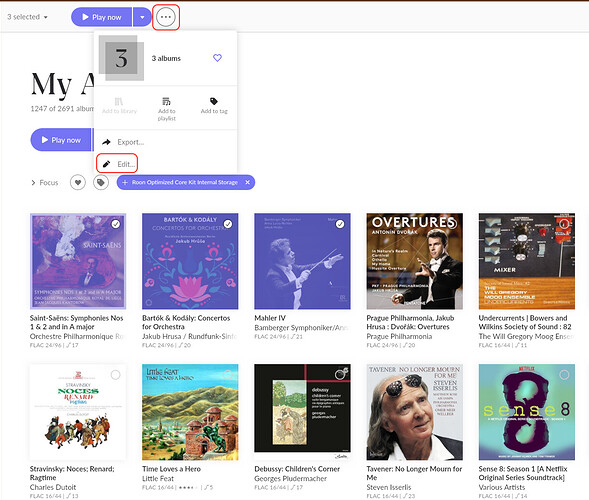 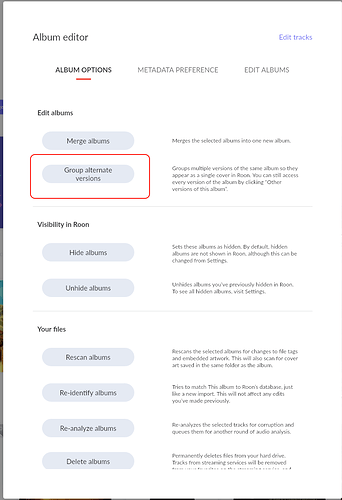 When I click on the album (primary version), this is what I get

When I click on the album (primary version), this is what I get 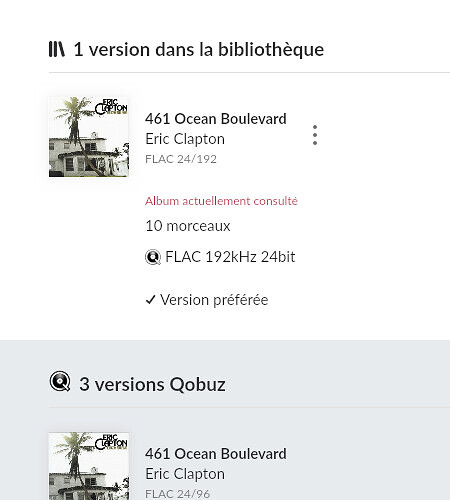 As you can see, the local version is not on the list

If I focus on “local library / Eric Clapton”, I can find the local version and then I get this 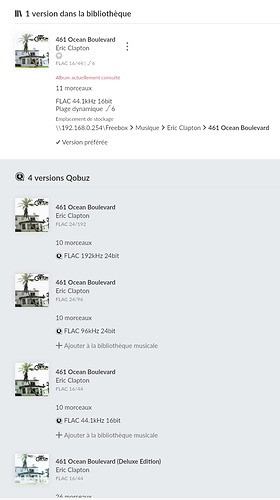 So I reiterate my point that the suggested FAQ does not address the issue described above.

A consistent explanation would be most welcome.

Some albums still not showing under artist on B790 Support

Hi @Daniel_l, B795 was addressing a couple of specific items, but other improvements are still in development for future releases, including this issue. I still can’t offer any timelines, but I can confirm that the ticket is with the development team to address in the future. Thanks for reaching out!

Not exactly the same but similar in this thread. Local albums not showing up under artists but when you search the album specifically it shows up. It has been acting this way since the release of 1.8.

Those examples of 461 show some with 11 tracks , not 10 as the original album that would imply a different release

Have you tried Albums Filter =461 , do you get multiple albums . If so you can group them

It is not uncommon for an album to have multiple releases , eg UK and US with different artwork, track lengths etc

My local and Tidal versions are grouped correctly

These are not duplicates (10 track versus 11 track album) you must have grouped them together manually.

These are not duplicates (10 track versus 11 track album). So each one is primary for the release it represents. You can also manually group them together like you did with the Doors album if you wish to see the same result.

You can also manually group them together

Of course I can.

Still, roon’s behaviour is inconsistent. The alternate versions listed should be exactly the same when clicking on the Qobuz 24/192 instance or the local 16/44.1 instance.

If the two versions are identified as different releases because of different numbers of tracks, the versions with 10 tracks should not be listed when clicking on the version with 11 tracks.

I had this issue too, with a small number of albums. They were not hidden, but entering search terms returned inconsistent results. For this Album I have Qobuz 24/96, there are TIDAL versions available, and I have a local 24/96 version.
When I enter ‘BWV 45’ I see the Qobuz and TIDAL versions.
When I enter ‘lebens licht’ I see only the local version.
I clicked around on metadata until I found a common piece of metadata that returned both albums in the same screen (under the Albums section). 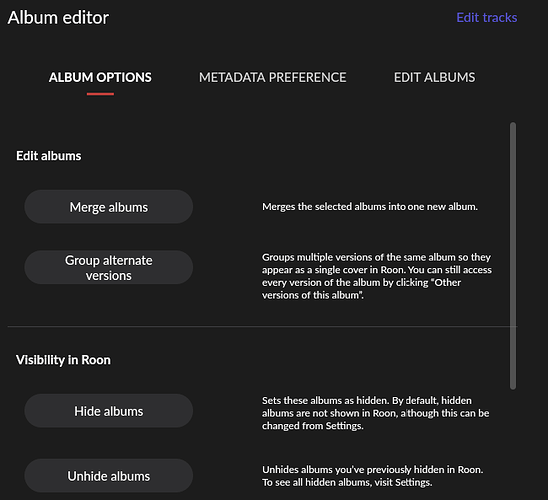 Now I see all of them together under Versions, with the local version set as Primary. 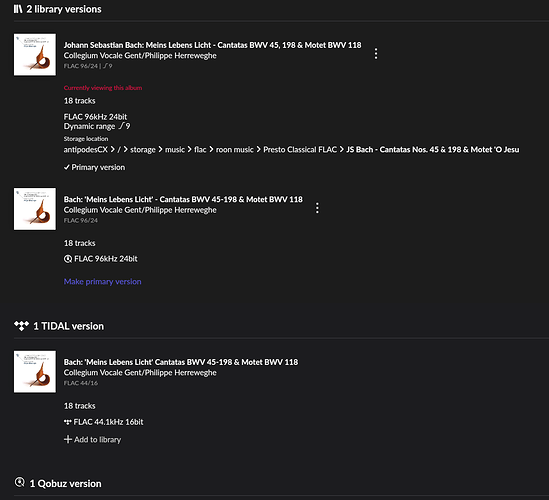 Now the key: I enter ‘bwv 45’ (my most familiar / easiest search expression), and get the correct album as the Top Result, with both the local and Qobuz versions shown under Library versions, and Qobuz + TIDAL in their respective sections.

HOWEVER, it still defaults me into the Qobuz version, even though the local version is marked primary.

Sooo the larger issue (I can’t find my local music) is fixed with this work-around, but the smaller problem of not respecting the ‘Primary’ album flag after grouping album appears to remain.

update: I decided I didn’t need the Qobuz version any more so I deleted it.

And waddya know, I’m back to the original problem: ‘bwv 45’ returns only the qobuz album, and I have to enter the other search term. So this is a metadata issue I suppose; I cannot figure out why Roon will not return the local album with ‘bwv 45’ search term when that is in the title. Giving up.

yeah i still can’t figure out the logic. If I’m not listening critically, I guess I don’t really care which one plays.

But it’s frustrating when you THINK you have the file, and Roon doesn’t do you any favors confirming it.