I’m getting this error constantly, mainly when searching. I push the button to restart, and it does, and then it crashes again a few seconds later. Happy to send error logs if that’s helpful.

Hey @Jim_Austin – LookupViewService is related to thumbnail/preview stuff in Finder – it may be doing background work or having an issue.

As far as we know, Roon doesn’t interact with this service at all, and we don’t have any influence over whether it crashes or not.

Googling around, this seems somewhat common in a variety of circumstances, and my guess is that this is related to whatever Finder is doing in the background, and not anything in a particular app.

Mike, that’s really interesting, and it’s certainly not obvious. This happens repeatedly–as in every few seconds–when I’m searching within Roon, and I can tell you exactly what causes it. Let’s say I’m trying to identify an album. I’ve made it to the screen where you enter artist and work name, and I’m making changes there. Let’s say it says “Wolfgang A. Mozart” and, to get more choices, I wanted to display just “Mozart”–so I try to insert my cursor in the search field in the middle, right before “Mozart.” That is exactly when LookupViewService crashes, and it does it Every Single Time.

So, I encourage you to consider whether something you guys are using–maybe some canned search routine–utilizes LookupViewService and maybe isn’t implemented exactly right. Because, from my point of view, it’s completely obvious that this error is coming from Roon.

Mike, sorry–this is hard to capture in a still image. I’d need to make a movie of my screen. Still, this might be a little helpful: It happened again exactly when I said it does. I was attempting to insert a cursor in front of the word"Beethoven" when it crashed: 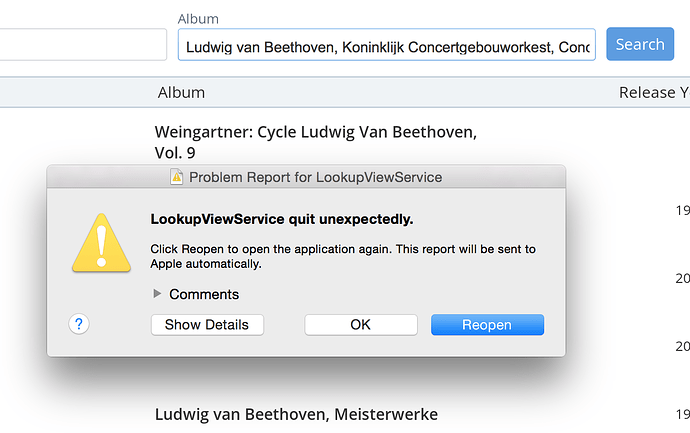 It could well be that this isn’t precisely Roon, but I’ve never seen this error anywhere else, and it ALWAYS occurs when I’m doing this certain thing, in Roon. [Edit: Just to be clear, this ONLY happens when I insert the cursor in the middle of the search text. If I insert it at the end of the string, no crash.]]

hey @Jim_Austin, are you using a MacBook?

hey @Jim_Austin, are you using a MacBook?

Just a guess, but I have read that Force click and haptic feedback caused problems but that was a while ago. I would’ve thought Apple would’ve fixed it. If you have that checked in the trackpad settings uncheck it.

Well damn–I just unclicked haptic feedback, then did the same thing again, and no error. Sounds like I owe Mike an apology. I never liked (or used) that anyway.