Upgraded to Version 1.2 a few hours ago. Added some music-related internet radio stations. Left it for a few hours, and now it will not connect. Repeatedly loses connectivity moments after it connects. Roon Server is running on a separate machine - has been working well under version 1.1. This issue applies on each remote computer I’ve been using to control the server. 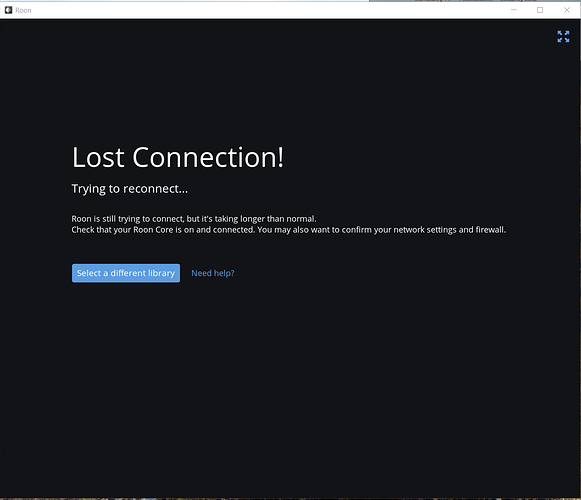 This is an intermittent problem. Occasionally all’s well - for a fairly short period of time - then connectivity is lost once again. This is happening with the controlling computers and with the endpoints as well - loss of connectivity to RoonServer.

I’ve tried stopping and restarting RoonServer (as I said, it is on a separate machine - Windows Server 2012R2). That doesn’t seem to help. Maybe I should try uninstalling and reinstalling RoonServer?

It’s strange that this has changed–since we don’t think anything has changed with regard to remote<->server connections.

These problems are almost always related to networking in some way. There is likely something unique about your machines or network that wasn’t accounted for in our pre-release testing. That’s not a way of casting blame on your setup–it’s just part of the reality of making software in a world with such a variety of platforms and networking hardware.

The first thing I would experiment with is firewall settings–if you have firewalls on either or both machines, try turning them off temporarily, then restart RoonServer + Roon and see if things get better. If they are, that points in direction.

If you are already firewall-free, or if that doesn’t help, focus attention on machines with multiple networking interfaces. If you have something connected with both WiFi and Ethernet involved, try turning off one or the other temporarily. If it modulates the problem, it will tell us something about what’s going on.

And one small thing–long shot. When you’re on that screen, click “Select a different library” and see if your library is hiding there. Not sure why it would be, but if something were slightly broken on the user interface side, that would be the problem.

@mike, we should also grab logs from @Ronald_Lyster in case there is something interesting in there.

Let me know how to send the log files to you (and where to find them on my server machine).

Firewall isn’t an issue. Tried selecting the library - that didn’t help. The problem is intermittent - although the amount of time that Roon remains connected (when it rarely does connect) is very short. I’ve rebooted everything. I even did a firmware update on my router.

Don’t want to pole-vault into this thread but I noticed my NAS using a huge amount of CPU and memory as well. I occasionally will get a new pop up message at the bottom of the Roon screen that says Roon is having difficulty retrieving file… My NAS is connected directly to my router and has 8gb of ram in it. Synology 2415+ with a good sized processor. No way its s a network issue from my standpoint. Seems like the new update is pulling on way more resources and straining the NAS. Thoughts?

If you wish to obtain my log files for development purposes, please let me know. I’m getting quite frustrated and will probably wipe RoonServer from my server machine and start all over again. If that doesn’t work, and support has no ideas, I’ll regretfully let my trial subscription lapse. (I really don’t want to do that, but as it is now I have no music.)

By the way, this seems to be getting worse. Roon cannot seem to find the server at all now (and I know it is running). 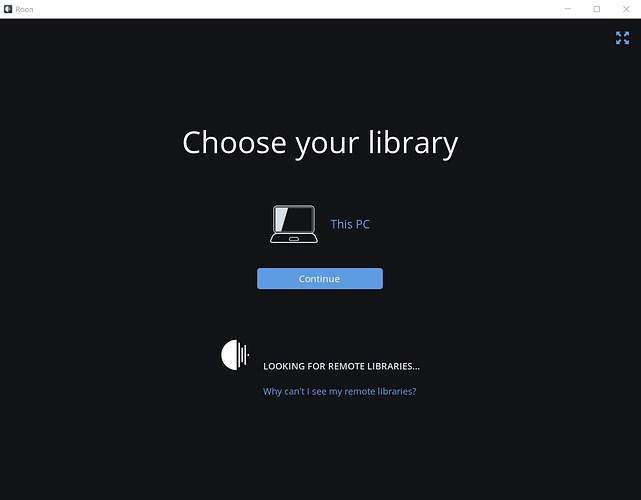 @Ronald_Lyster, please bear with us. We only do major updates like this once, mayby twice a year. The experience you’re having here is not representative of life-with-Roon on the whole.

@vova, lets make sure we get @Ronald_Lyster’s logs. If he has remote + server, I’d like to see both.

Hey @Ronald_Lyster I’ll contact you shortly via PM to grab the logs.

Thanks for you patience.

We did and we’ll be analyzing them over the next day or two. Thanks in advance for your patience here @Ronald_Lyster!

My primary output is through Squeeze box devices. I am not using sound cards in computers. I was able to use Squeeze play with Ron 1.1, but that isn’t something I would do often. I also have a Yamaha receiver with built-in AirPlay, and it used to work fine under 1.1 also.

The setup is a Windows 2012R2 server with all the music files and Roon Server. That server is not connected to anything other than the network. I have several computters that control the server. I also have a Samung tablet (Android) that successfully controlled Roon 1.1.