LS50W No Longer Seen by Roon

I have a pair of the original first gen KEF LS50W speakers. I had been using them for the last year with a microRendu. I sold the mR earlier this month and now want to use the LS50W in it’s native implementation with Roon but for some reason Roon no longer sees them. Everything is wired with ethernet cables. When I go into settings the speakers don’t appear there at all. Did something change such that they no longer are recognized? I can see the speakers with the KEF apps. This is just weird to me. I rebooted literally everything twice. Still nothing.

Does the June 6th firmware update apply to your speakers and have you done the speaker reset (paper clip)?

I don’t know anything about a June 6th update. So no, I didn’t apply the update (I never saw one on their web site). Also, no I didn’t do the paperclip reset. Might be worth it to try. Thanks.

Where did you see a firmware update dated June 6th? Are you talking Roon or KEF? There is no KEF updates for these speakers since November of 2019.

I searched for you, and found a June 6th update and a recommendation for the paper clip reset. Now I am again seaching for that firmware.

It may be also on their Facebook (I do not use) page while I continue to search.

John, now all I find is this. 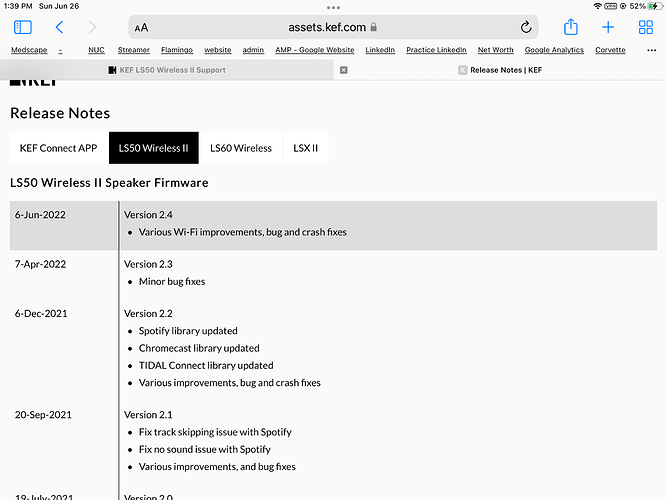 FWIW: There was un update earlier this month for my LSX (firmware 5.1 to 5.2). I updated through the KEF Control app.

That update you reference was for the LS50W II. I have the original LS50W. 1st generation.

I have the LS50W not the LSX. Thanks.

I know – but as they share the same platform, there may be hope an update is coming for LS50 as well.

Optimist? They haven’t produced an update for these speakers since November of 2019.

FWIW, mine are still working. So no changes that I know of to make them not work.

Some things to try:
Put the speakers in WiFi mode. (I have mine wired and wireless, but they seem to show up quicker when I select the WiFi mode, I have noticed that the router/AP get’s confused sometimes when both ethernet and WiFi are active).
Go to KEF control, once connected to the speakers tap on the three dots in the upper right corner, tap on “speaker info” and see what IP address is assigned.

Check your router and see if it shows the KEF on the network?

Make sure it is on the same subnet as Roon in both of the above?

I also just checked and I only see the Nov 2019 firmware update on the KEF site.

Thanks. I tried most of that already. The speakers have a valid IP address. I don’t remember the procedure for a factory reset. I also might move the IP address because I was also thinking that two things are parked at the same address but they work just fine via the KEP apps. So maybe that’s a wild goose chase. Glad to know that yours still work. That means once I solve this mine will work again too.

I fixed the problem. After trying everything I could think of, I hard rebooted the Core machine. I had originally stopped the Roon service on the Core machine thinking that was the same as a reboot but I guess it’s not. After a full shut down reboot when everything came back up the speakers are there again. It had been about 15 months since I ran them this way. I guess something got sideways in that time.

Glad you solved it.

Me too. It felt oddly satisfying.

That is a curious thing about problems…they annoy us and then we are the victors…my wife notes “it is always essy to solve things the second time.”

This is the second thing I fixed this week in Roon by rebooting the Core. I never reboot the Core. Strange behavior.

I got tired of fussing with the LS50W wireless problems - ethernet’s not an option in the room where they reside. First bought a pi streamer - that kept dropping the wifi signal too. Just bought a Node 2i - working great. I use the optical output. Roon doesn’t even see the LS50W any more. I think its internal wifi streaming apparatus is kaput!