Last few days I’ve noticed that whenever I’m running Roon the fans on the MacBook are constantly on. This is a really recent phenomenon and I’ve really got no idea what’s changed. All the info is below including CPU use with Roon and without Roon. Interested to know if this is an isolated problem?
thanks
mike
https://ibb.co/JrLFJ8j
https://ibb.co/cQ2wqm8
https://ibb.co/qmKZWPJ

I’m running the exact same version on an older Macbook Pro (early 2011/High Sierra) and am not having any issues. I’m thinking you’ve got something else going on that’s just not showing up - iCloud syncing issues maybe? That’s what putzed up my Mac some time ago and made my fan run like mad, but didn’t show up anywhere.

Unfortunately high gpu and cpu usage is not at all uncommon on newer generations of Macbook Pro. Just do a quick search and you’ll find many related threads. Personally, I’m experiencing high gpu usage.

We have an active investigation into high CPU reports on Mac, can you please confirm if turning the WiFi adapter off and back on has any impact on your CPU usage? Do you have any audio analysis or library importing in progress?

Hi
I don’t use WiFi - I’ve got Ethernet connected via a dock. I get the high CPU activity as soon as I open Roon - nothing importing and no analysis going on. This is a recent phenomenon and may be due to the most recent MAS OSX update?
Thanks
Mike

I tried switching the WiFi on - CPU usage dropped right down to around 6%, temperature dropped to around 56° and fan noise subsided! Switched WiFi off and CPU usage remained steady.

Can’t see any rhyme or reason to this. Just opened Roon (laptop has been awake for 5 hours). CPU usage jumped and temperature increased. 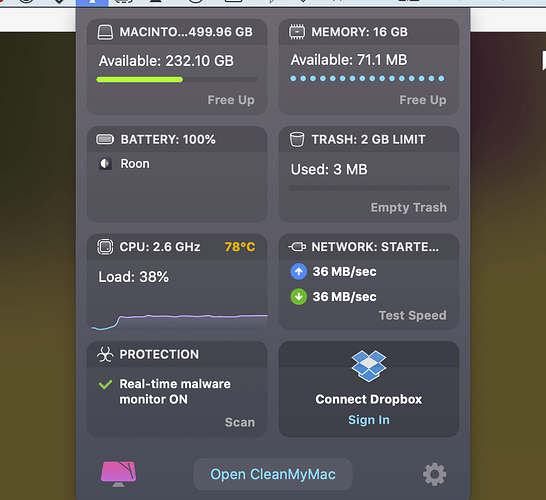 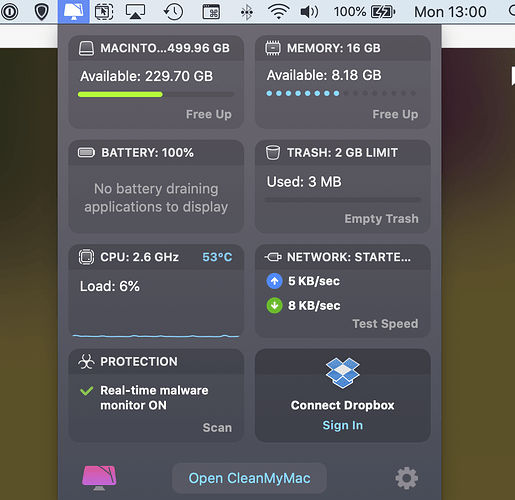 Just to clarify - Mac is being used as a Roon remote - I’m using a ROCK as the Core.

What was Roon doing at the time, did you have music playing?

Is ~40% the most CPU used? This doesn’t seem to be quite high if there was activity happening inside of Roon.