MacOS unreliability, could it be a server memory leak?

Over the last couple of months, Roon has become more and more unstable, now verging on the unusable:
1.Roon Server is suffering from a massive memory leak, rising from c.1.2GB on launch, ramping to using all available real memory (8GB) within 24 hours. Result is frequent dropouts and complete halts to playback
2. Dreadful performance, which I put down to Roon still not having released an M1-native version
3. Unreliable Mac client, which can’t even be force-quit.
I’ve had a lifetime license for years, but Roon is very rapidly becoming completely unusable, no matter what I do. If you aren’t prepared to support a mainstream operating system such as MacOS, say so and refund our licenses - I see a lot of people with the same issue, and no effective response from Roonlabs.

Thanks for taking the time to write in, and I’m sorry to hear you’re running into potential memory leak issues!

We’ve enabled diagnostics on your account to better examine potential causes. After reviewing your Roon logs, nothing in the logs suggest that there’s a leak. That’s not to say that there isn’t a problem with memory usage, but it doesn’t appear to be something directly related to Roon.

For next steps, please look at simplifying your setup. If possible, hardwire your core directly to your router, bypassing your managed switch and anything else in between your core and router. Give your router, core, and any devices a hard reboot as well.

Also, if you have Private Rely turned on in your iCloud settings, please disable this and see if your issue occurs.

Very interesting point you make - I’ve only recently migrated to Ubiquiti for routing (UDM Pro) and WLAN - haven’t had any major issues so far. In the past though I have had to reboot the Netgear switches - had forgotten to do it for a while, and your reponse made me remember, so I’ve just done so, and currently having no issues. Thanks!

That of course doesn’t get around the memory issue - I’m running on a base spec M1 Mac Mini with 8GB and I’m finding that memory use starts around 1.2GB and, over a couple of days, rises until it takes over all real memory and the system starts swapping.

That’s exactly the setup I’m using - M1 Mac Mini running headless with Roon Server. Odd that you’re not seeing any memory creep (I’m on MacOS 12.4 and Roon 1.8/988) - as noted, mine starts out at about 1.2GB, but invariably rises to take over the machine. Local library is around 30k tracks and logged in to Tidal and Dropbox (for backups), with the only extension in use being TV:Remote.

Thanks for replying - it’s nice to get a support response from Roon. I’ve tried most of what you describe - although after rebooting the managed switch, the playback breakups have - for the moment at least - gone away. Will keep an eye on that. Private Relay is off, BTW, but I’m also not linking any iCloud services to my Roon usage. I’ve also turned off Private IP address on all devices - that really does screw up DHCP.

None of those however are addressing the memory issues I’m seeing on the Mac Mini - Roonserver goes from c.1.2GB memory use on launch, to using all real memory and pushing the machine into swapping. That typically takes 2-3 days. I also notice that RoonServer spawns two processes on launch - is that how it’s supposed to be?

Client instability hasn’t gone away either - Roon sometimes becomes completely unresponsive and continues playing even after being force-quit. Same MacOS/Roon builds in all cases (12.4 & 1.8/988) 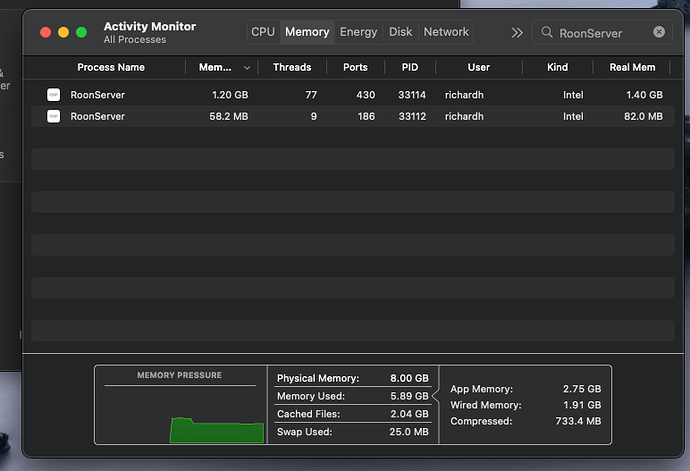 Thanks for helping them solve the issue, I used to have the same problem before but if it does happen I will force quit Roon and then reopen and it usually goes away.

I’m still finding that I have to quit and restart RoonServer every couple of days, and the client sometime won’t allow itself to even be force-quit. I look forward to a proper M1-native version at long last (if ever), but have significant doubts about Roon’s adoption of .Net as a common development framework.

but have significant doubts about Roon’s adoption of .Net as a common development framework.

I did post an explanation but Roon flagged it as O/T! In short though, poorish conformance to Mac architecture and OS services, resulting in high runtime overheads and sub-optimal performance.

Hmmm. Doesn’t sound great. I’m just hoping that they sort out the memory management. Currently I’m having to restart the core every couple of days.

As far as I can see, .Net 6 is a significant improvement in that regard but I’m always in favour of using frameworks and languages that are optimised for compatibility and performance on each platform (for a platform-specific app rather than a web app) - otherwise it’s a bit like trying to minimise the difference in feel between a Porsche and a Ferrari by driving each whilst wearing oven gloves and wellies!

Yeah, that makes sense, but I think the chances of Roon using different frameworks for each platform are slim (to none). If they sort out the memory management I’ll be happy.

Yeah, I’ll go for that too - the core functionality is good, and I’d like better OS integration, but would settle for decent search performance and stability. Oh, and remote VPN access!