Vodafone fibre broadband with Apple AirPort Extreme. iMac connects wirelessly to the Airport and then Ethernet to the Sonore Microrendu.

Ethernet from AirPort Extreme to microrendu and usb to Chord Hugo TT, played through Focal Elear. 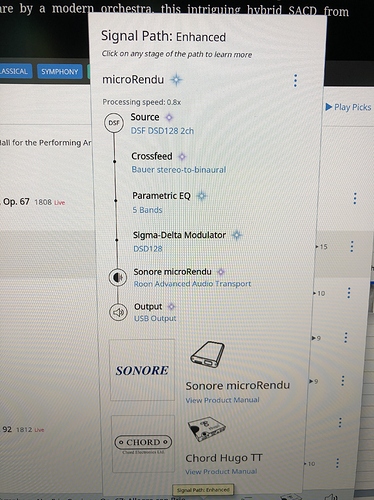 Hi. I would expect my Mac to have enough processing power and memory to manage dsd using the parametric EQ (5 bands) and crossfeed. DSD64 processes at 1.5x, while as you can see, DSD128 drops to 0.8x. Both cause major dropouts and then stop playing. iMac processor clock never exceeds 62%. Might I be throttling the Roon software with incorrect settings somewhere? Please help.

Your processing speed has dropped to 0.8x.
In short, no, you don’t have enough computing power to run this combination.

anything under 1.4X is likely to have dropouts …too many DSP operations.

Thanks for the prompt replies. Just to clarify then, are there any settings in Roon that I could utilise to increase processing power used? I ask only because my cpu never runs above 63% while running this task and I hoped to utilise more of the 4GHz and 24GB ram!
Thanks.

Standard pcm would be a lot easier as I’m sure you know DSD is hard work.

I do have a lot of pcm, but I do enjoy dsd recordings. Just trying to squeeze more out of my overpriced/over specked computer! (Or so I thought!)

Have you used the Parallelise Sigma Delta setting?

Try DSD64. That should help.

I think to perform the Crossfeed and PEQ you have drop out of DSD to PCM and then its converting back to DSD again so that is where the additional CPU power is going.

Maybe take out those DSP functions and see how you go. But Parallelise Sigma Delta is a must have.

Thanks for the advice, that makes sense. I wasn’t aware of Parallelise Sigma Delta, let alone spell it

. I’ll get on it. As an aside, do you think a Nucleus + or similar spec would fair better doing this as it’s a dedicated system? I’m toying with the idea of an up-specked Roon Rock i7 fanless server from InsideTech?Just not convinced of the overall cost benefit of it. Thanks again.

The Mac should be fine…try the PSD option it may help a lot AND just try to run with less DSP options. DSD conversion both ways is a hog its bad enough having to do it in one direction.

With so much DSP messing with PEQ and Crossfeed you might be defeating the original signals benefits anyway.

Roon by default tries to do everything with a single core. That setting allows Roon to share the load with some reduction in efficiency but better load handling. It may be all you need to do.

This is just a question not an accusation: if the DSP requires conversion from DSD to PCM and then back to DSD for output, why would you want that? Wouldn’t you lose the benefit of that DSD character of sound? What’s the point?

With so much DSP messing with PEQ and Crossfeed you might be defeating the original signals benefits anyway.

@James_I I think that I summed it up earlier.

Thanks all,I appreciate your advice. I suspect you are right regarding all the extra processing cancelling the benefits. Problem is, I like the sound I’ve found with my eq settings

. I think I’m just a little unhappy that my fancy powerful Mac can’t keep up. I am very interested in playing with Henry’s post. Henry, do you know where I need to look to change the default settings please? I’ll let you all know if it works, or if I have to back down on my demands. Thanks again.

Found it. Added the Parallelise Sigma Delta setting and dropped Crossfeed as the HugoTT has that option on board, and have got her up to 9.3x, maintaining similar sound, I think