I finally had to disassociate my Tidal account from Roon. I basically buy the music I want to hear and Roon’s apparent insistence on always showingTidal albums is just plain intrusive. The only case where I do want Tidal by default is the Radio. If I’ve listened to an hour or two of my own music then, yes, I do want to hear what I don’t have. Other than that, I would prefer for Tidal to be exposed only via explicit choices.

Could you be more specific where you feel Tidal coverage is too intrusive in Roon. Having specific examples would realy help.

I can’t really right now since, as I said, I just disconnected Tidal from my Roon because all I did was ignore Tidal, except for the Radio. As a summary, any place you show anything from Tidal: Genres, Artists, Albums, the Overview page, all of it. Basically, I only want to see anything having to do with Tidal when I request it. Otherwise, just show me my music.

The one that troubles me is that Roon always shows an Other Versions button.
I have no interest in looking for a Tidal version of an album I have (unless it is MP3 which it isn’t). Ok, the list doesn’t appear unless I ask for it, but this means there is no way for me to see if I have a CD version (or even an old MP3 I should get rid of) behind a hi-res album. I always have look, might be local, might be Tidal.

This is intrusive because I look at albums very often.

In the Artist page, looking at Tidal content is well segregated and quite valuable.

The behavior I’m getting now, utterly without Tidal, is exactly what I want, except that I’d like to be able to choose a Tidal radio.

Personally, I appreciate having the Tidal options appear. It’s great to have Tidal material appearing which can lead me to new albums and artists and such.

Tidal is easy to disable in Roon, which I do from time to time when Im not online or fancy the clean look.

Having said that, the OP could be on to something… To have an option in settings to only show Tidal albums specifically added to library would be pretty cool too. And then to only access Tidal for searching new stuff via the main menu selection. This would be a good compromise.

Personally, I appreciate having the Tidal options appear. It’s great to have Tidal material appearing which can lead me to new albums and artists and such.

Agree. The Tidal integration has led me to discover a ton of music. Thus, de-emphasizing Tidal is fine as an option. But I wouldn’t choose that option.

Plus if Roon is, as they’ve said, going after iTunes users, I wouldn’t expect them to go in the direction of de-emphasizing streaming at all.

-1 for this. If you can’t articulate what it is that you don’t like, it’s hard to support the request.

I only want to see anything having to do with Tidal when I request it. Otherwise, just show me my music.

Use Focus and Bookmarks.

Maybe just an option (including for services that might be added in the future) to disable/enable a service without having to log out and log back in? I probably wouldn’t use such an option, but it would seem to address the OP’s concern.

Yup. That’s pretty much do it. Thanks for the simple suggestion.

You can use Focus to remove Tidal content from view already.

Yes, I’m familiar, but that doesn’t make Tidal disappear globally in the way the OP is looking for; e.g., Tidal still shows up in the Overview.

As I say, this feature isn’t a big deal to me, since I enjoy the Tidal integration. I’m just looking at a possible way to address the OP’s concerns, in case there’s a cohort with similar desires.

Personally, I like the Tidal integration, and ability to select other versions.

I bought Roon Because of the Tidal integration. It is thus far the best option for merging my own albums with a streaming service. I would have prefered Deezer instead of Tidal but hey, it works and the content of all the services is about the same nowadays…Roon would loose a lot of it’s value to me if Tidal integration was not so deep. As far as I’m concerned it’s not even deep enough.

The option is currently available, David, for disabling Tidal without logging out 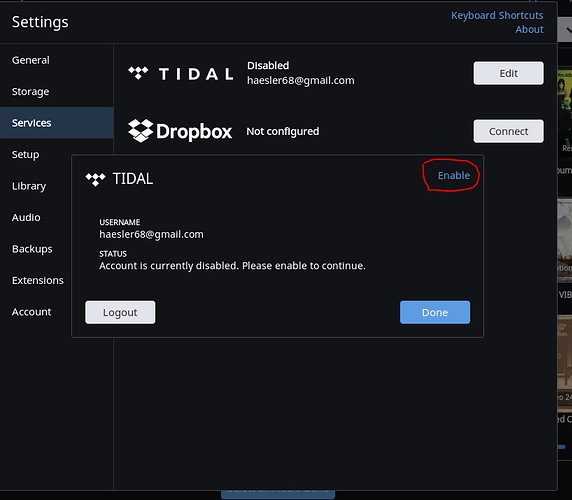 I use it quite frequently. It would be nice if it were more prominent, as an option always visible or on the main menu for the settings. Very useful feature.

Yes. I used this, and I created the upteeen focusses. My post isn’t about whether I can ignore Tidal or not; it’s about how Roon makes Tidal so intrusive. I may be in the minority, but I’m just asking for all of this to be easier for someone who wants to choose Tidal one time this evening, rather than having to do something to avoid Tidal the other 99 times. Just give me an option.

I am with you. In fact it annoyed me so much I cancelled Tidal. For now i just use Spotify to see if I like stuff and then buy it if i do. Spotify Connect is handy too.

The one that troubles me is that Roon always shows an Other Versions button.

This is a no-brainer to fix, we’ll get it done.

Just give me an option

There this the Settings --> Services --> Tidal - Enable / Disable option, does this not achieve what you are looking for? If not then how specifically would you like Roon improved?