I’m having difficulty managing one aspect of my collection for which I could use some advice. I have a fairly extensive collection of multichannel albums (approximately 300). My collection is set up so that the Primary version is the highest resolution Stereo version with the multichannel version grouped underneath. So far, so good.

The are only two ways to see all multichannel versions using Focus as described: (1) manually remove every multichannel album from the main album group (which obviously clutters up the album display), or (2) change the “Show hidden tracks and albums” setting to Yes (which would have to get toggled on and off before and after doing the multichannel focus or you’d really clutter up the album list display). Both of these are pretty sub-optimal.

Is there a better way to do this? It would be cool if Focus could see hidden albums in addition to the Primary version, and thus you could use Focus to really drill down into all of your collection.

I keep stereo and multichannel albums separately in different folders on disk, so that in Roon they are listed as different albums, although it’s the same album in two different versions.

The problem arises when I want to have a multichannel listening session of multiple albums. Unless I rely on memory, there’s no way to find what multichannel versions are available.

Use a tag to “memorize” the multichannel versions.

I also tag my multichannel albums to make it easy to quickly access them.

Unless I rely on memory, there’s no way to find what multichannel versions are available

Don’t you have a “channel layout” option? It’s the last thing in focus when I’m looking at albums.

versions. The problem is that this only shows those titles where the multichannel version is Primary (usually because there is no stereo version).

Ignore my above. I just realized the same thing. Why Roon why?? ← That seems broken to exclude versions from focus.

Well… now it shows the versions. I verified 2 things:
General → Customize Album Display
and I have the following now checked:

And I have “Show Hidden Tracks and Albums” on

Enabling the two album displays allowed the none primary to show-up in focus.

As far as I understand how Roon works, the two display options just allow you to distinguish the different versions from each other. The “Show hidden …” option is what makes those (previously hidden) albums show-up and accessible trough Focus (the display options should not have influence on that but you don’t know which version you look at without the additional information provided trough the display option).

Agreed, but it changed what is in focus and I have no idea why.

Well, now I’m just talking rubbish because unchecking those options the album continues to show in focus. No idea whats going on but my non-primary versions were not there until I toggled those options. Now they are there regardless of those options being on/off.

May depend on how many hidden content you have (and maybe even its source [streaming vs local]) how long it takes for Roon to apply the changes (load the additional metadata).

It may also be, guessing from your description, that you already had a Focus applied before the changes?

Then changing the “Show hidden …” option may not have influenced the displayed Focus result based on a previous state of Roon’s DB (change running as background task because time consuming or an application design decision), the visual change through the changed display option on the other hand may have enforced an immediate (data) reload and redraw (including re-execution of the Focus – may then violate an eventual application design decision [active Focus result set should have been preserved] → BUG) so the requested changes could be displayed.

This how I created a bookmark for my multichannel discs: 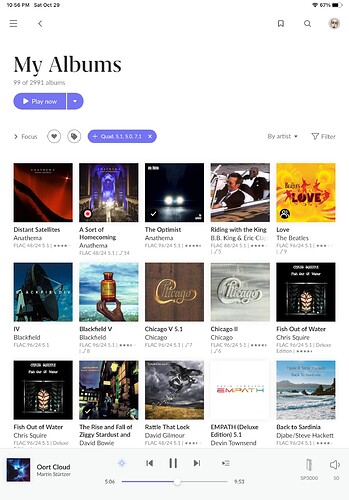 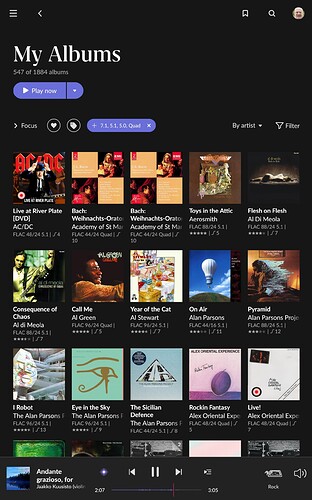 Of course I realize this is a special case and there’s not likely many of us out here with ripped DTS CDs in our collections (I just have a couple).

I’m not sure what you consider a DTS “CD” but I have a 2 DTS multichannel in my collection. Example: 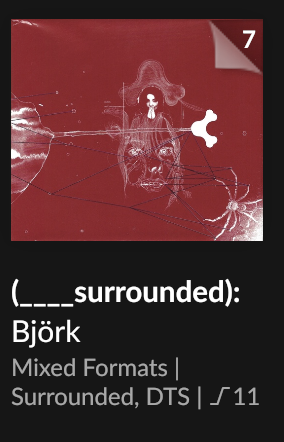 All of these tracks are correctly shown as FLAC 5.1. This album shows-up in focus when selecting Channel Layout 5.0 and 5.1.

It depends on if the rip decoded the DTS bitstream before writing/saving the file. If decoded during ripping, Roon will see that the resulting file is multichannel. If not decoded, Roon can’t see that it’s multichannel since Roon does not include DTS decoding (or other encoded bitstream formats like DD, etc).

Ahhh, you’re right. Whatever I did to rip these ripped them to FLAC 24/96 6 channel. This leads me to believe the source, without going upstairs to actually look, is a DVD with DTS 96/24 tracks on it. These are 6 tracks of 96/24 PCM is my understanding so the rip should be good in this case. However, home theater formats of DTS won’t be supported without conversion as those use some compression on some of the channels.