I’ve come across this a few times now - basically text in album reviews or artist biographies overlaps, hiding some of the text. Other times sentences are repeated.

An example would be Thin Lizzy - Jailbreak … The review text for the initial release is fine, the text for the 2011 remaster is as described above. Both are fine at allmusic.com. Parsing error perhaps?

I’ve seen the text duplicated on several albums. Should I be filing them here when I see them? I just assumed it was an allmusic problem, but maybe it’s on Roon’s side.

It looks like it’s on Roon’s side - post a few if you have them, it may help the dev team identify a pattern.

I used to see a lot of repetition/mangling where a review had a segment in square brackets towards the end about alternative versions. Quite often the sentence immediately prior to those brackets was duplicated or mangled.

That appears to have been solved now. Anyone else still seeing that ?

@audiomuze and @Mike_Pinkerton, if you are able to take screenshots, paint around the mangled/repeated text and upload them to this thread that will give @jeremiah a flying start in getting them fixed. I understand that’s a hassle, so only if you feel so inclined

We could then change the title of this thread and make it a central repository for text glitches.

@andybob here’s one from Lou Reed’s Rock and Roll Animal:

Note the last sentence before the brackets is repeated. This is with build 88.

^^^ I’m still seeing that quite often, I suspect my Thin Lizzy Jailbreak is of the same ilk…line 7 (sorry, I don’t have any snipping tools installed). Brian and Jeremiah already have this one for follow up. 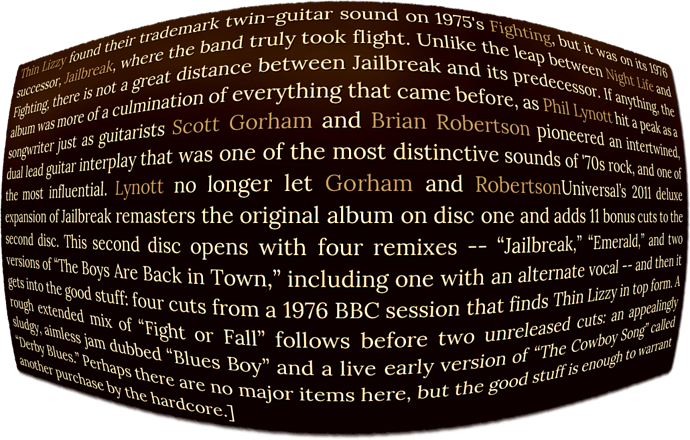 @andybob @mike
Still seeing the text mangling where there are square brackets - wasn’t this supposed to be fixed, or was that just a rumour ?

Still seeing the text mangling where there are square brackets

We have a ticket open about this guys, fix is coming.