Many albums on QNAP NAS not found [Solved]

My Roon is missing many albums. I don’t even know how many without comparing folders and Roon albums manually…
As an example, Roon finds only 8 of 12 Electric Light Orchestra albums. They are in the same folder, nothing different in the files. All m4a, permissions of files and folders the same (770), same owner, no long file paths. I have “touched” the files to help the rescan. No success. They are also not found by searching in Roon for the album or track name. They show up nowhere. Here is a screen shot of the files on my NAS, the orange marked albums are not found: 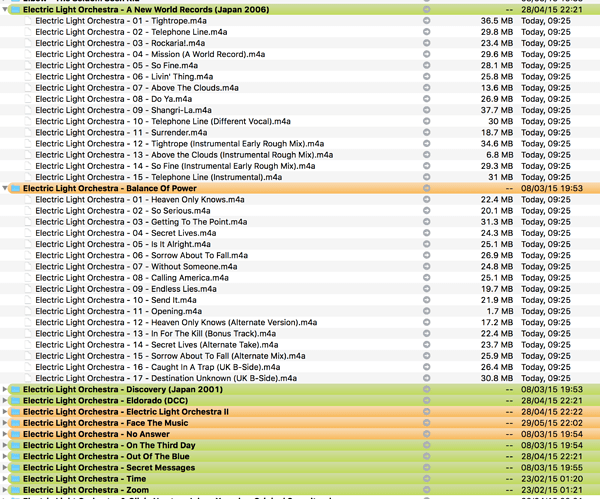 Files are on a QNAP 871T NAS (SMB) , Roon on a headless MacMini late 2012, El Capitan, wired ethernet.
This looks like a structural issue, not some spurious odd file or folder.

I hope you can help me out.

Great NAS.
Why do you have the Roon Core on the mini and not on the NAS?
Try to convert 1 album to flac and see what’s happening.
Just to test if the problem is in the files or in the NAS(or Mini)

Hah! Thanks Ruud, you helped solve the problem!
I was following your suggestion to convert into flac. In order to not have duplicate folder names, I edited the old folder name and found out that it ended with a space.

After removing the trailing space from the folder names the four missing albums were flawlessly found upon a rescan.
Fantastic. Now I only have to find an automated way to identify folder with a trailing space, but I’ll figure that out with Yate or so.

@support, it looks like this nasty bug can be fixed in a simple way, look for a trailing space or period (.) in the folder name. I didn’t check, but I can imagine this could happen to file names as well, potentially explaining missing single tracks.
[Edit] Or add these problematic trailing characters to the Blacklist here on this forum.

The QNAP is great indeed.
I find that large file transfers, e.g. over Thunderbolt to my iMac, slow down everything else on the QNAP. The same with extracting of large archives with sabnzb on the NAS.
Also, I am running HQP on the mac mini, and of course it is the Roon endpoint connected to the DAC.

The issue extends to files. If files have an extension with a trailing space, they will not be picked up by Roon.
I guess I will have to do the trailing space scanning/replacing with all my tracks. You cannot tell by just looking at the files in Finder or Path Finder because a trailing space is invisible

Is there an easy way to find trailing spaces on a QNAP?

dpstjp, I used Path Finder (Mac), as mentioned in my post here 3 days ago.

Ah! Path Finder is an app.

I’ll give it a shot, thank you.