Saved in Qobuz which was done via Roon when I listened to them but no more in my Roon albums.

I thought I was going crazy, but nope there is one example and there are so many in my history of unavailable Qobuz albums. 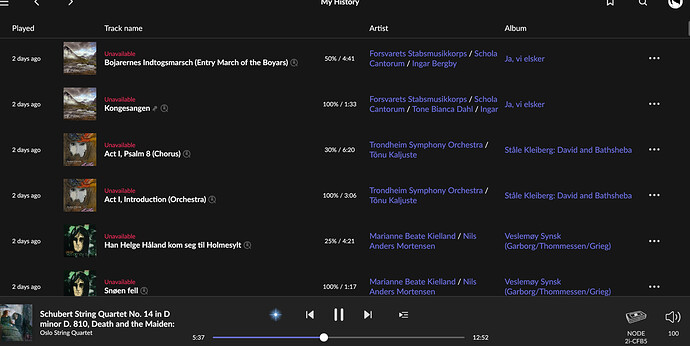 Additional info that makes no sense. I played and saved this album 2 days ago on Qobuz.

If I click the album in history I get:

But there it is playable and accessible right now. What is going on? Seems pointless to try and save it again until I understand that it would actually be saved.

From time to time Qobuz updates the versions of albums it has in it library but don’t remove the old entities . These new ones tend to have a different id and Roon will not switch to the new one automatically. The old one becomes unavailable as it’s in your Roon library. If you go to versions tab for the album you should see another Qobuz version. Add that make it primary remove the other. Its happened a lot with me not a lot you can do. It’s how Qobuz works on Tidal they just completely dissappear without any knowledge it’s gone so this is slightly better than how they handle it.

I did put in a feature request to be able to manage this better I suggges you do the same.

All Qobuz favourites have disappeared from the roon library. They are still visible in the Qobuz section of roon or in the Qobuz app.

I have restarted the core, restored DB from backup, resync’ed the Qobuz connection: no change.

Hey everyone, Just wanted to thank you all again for your patience on this one. We looked into this and it there ended up being an issue with the server that was syncing data to us from Qobuz. We worked with them on this and they’ve confirmed that they made a fix on their end which seems to be working. If you’re still not seeing your favorites, hang tight! They should be available soon.