Many primary artists on an album

i have noticed more an more that roon are tagging many primary artist on an album, and the result of this is that a bunch of artist are showing up under artist browsing, that I do not want there

here is an example, where an album are showing 7 primary artists, while this is " Bueno para Nadie by Ray Pach " album and this is the only one I want to show. This has become a problem as it happens a lot and a bunch of artist show up under artist without any image, without any other album than this…

This was actually added when I added “albums from Carla Morrison” to my album list, I have even not ever added this album. I have not added album from any of the other artists (dont even know who they are), and even so, this is not one of the Carla Morrison album I marked.

this has happen by default, I have not turned on anything…And it is happening on a very large scale, where i have to go to hundred, of not tousens of album and edit them out 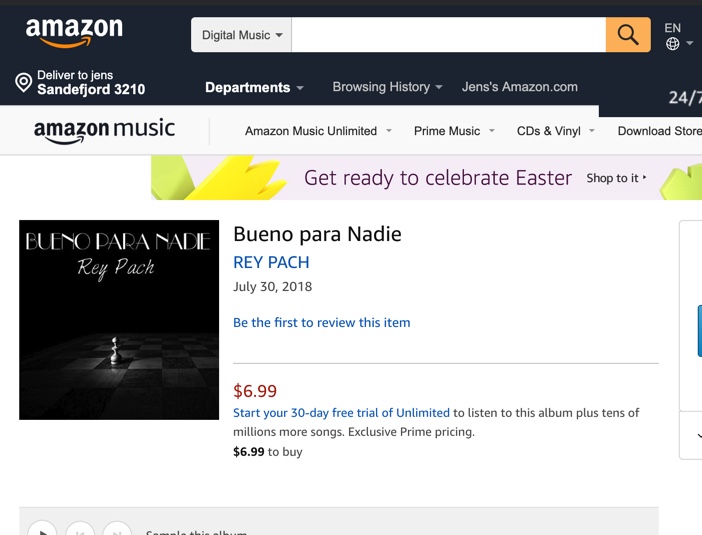 How can I stop this from happening by default without me having to edit them.?

In short, I don’t think you can do anything other than edit the album. The metadata are from TIDAL – there’s little information about this artist online and no entry on either MusicBrainz or AllMusic (Rovi) so Roon has little data to work with.

However, it would seem that Carla Morrison is a performer on the first track but identified as a primary artist for the album whereas The Legion and CASE G are correctly identified as performers.

Could Roon handle this situation better? 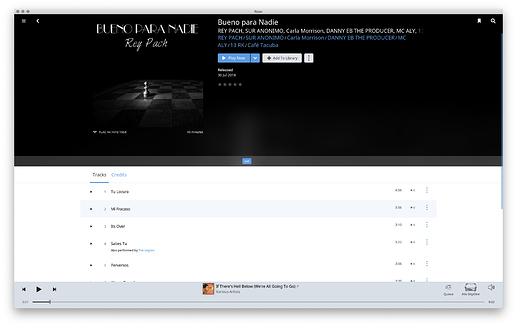 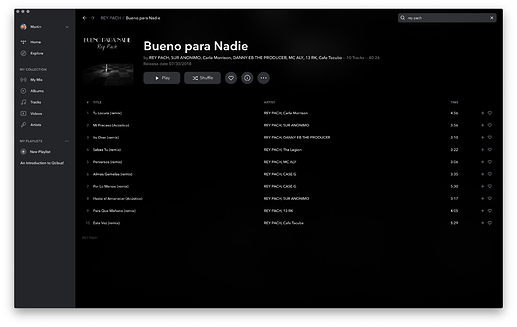 As Martin mentioned, this information is coming directly from TIDAL. The best option here would be to make edits in Roon or reach out to TIDAL support about getting this changed.

This I do not understand. Are not roon suppose to handle the metadata for my albums? Should not roon overide what ever is comming from Tidal? I am saing “are not roon suppose to” because when I phurcased roon licens it was because roon was suppose to handle metadata better than most other apps like this.
On all music players before roon I had to use a lot of time, editing data on the album/artists. Now, this is really what I am paying premium to not have to do…
So, should not this be handled by roon? So, even if I go to the setting and say “prefere roon” on all setting for a album like this, nothing more happens… I understand that Tidal are sending pore data, but we know that. Is this not what should be handled better by roon is my big question here…

Also, as I tried to describe this is a two fold problem. The second problem I have here is that I have never added these albums, not in Tidal, not in Roon.So why does they even show up here?
This is not just happening to a album or two, it is bigtime and a lot of albums and it will require a hug amount of editing time. Time I do not have an that I was expecting roon to handle…

When I have added a set of album for an artist, this artist show up in my library. Now, this is as expected. Then it can go some time, and suddenly is an album (as the example I have used here) added, where all the 7 primary artists also are added as artist in my library. I can not see that this is an expected result. It should not show up unless I hit the “add to library” button, right!?
Some time more go, and suddenly there is another album where this artist have been part of the song, and so on… This is endless it seems to me and it is happening in a large scale. Not just as few album.

I would hope that this is something that roon can look in to, I am sure this happens to all unless there is some setting that can stop this…

Roon gets it’s metadata from a variety of sources. Generally, if an album can be found on AllMusic (who uses one of the same metadata providers) or MusicBrainz, we will have metadata for that album. We also get data from TIDAL and Qobuz for albums from those services.

If you look on MusicBrainz and AllMusic, you will see that this album does not exist on either site. The only place we have information on this album is from TIDAL, so the metadata seen in Roon is just the metadata that is coming from TIDAL.

The second problem I have here is that I have never added these albums, not in Tidal, not in Roon.So why does they even show up here?

Just to clarify here, you never added this album to your library?

Roon does not add favorites to your TIDAL library without you choosing to do so manually. If you’re seeing albums being added that you are not adding personally, I would recommend changing your TIDAL password.

I have tried the change passord route, it is not anybody else doing this. Even tried to open up a new account at one time…

It is not only this album. This is happening on an ongoing basis. That is why I am bringing this to attention.

You have to see this in relationships with the other problem described here.
Again, there are more than one thing happening here.

*I can have an artist that I have added some albums to my library.

*Suddenly after a long time, there is added to one of these albums more than one primary artist (this was not the case when I added the album) (this can be ex an artist parisipating one one song)

So even though tidal is responsible for this metadata, and wrongly put in this artist as primary artist, I have not added or want this artist as an artist in my library… This last part is what I see as the problem here…

Artists work a little different than albums. While your favorited tracks and albums from TIDAL sync to Roon, that is not the case with Artists.

If this was changed so that only Ray Pach was listed as the album artist, Ray Pach would be the only Artist added to your library from this album.

*I can have an artist that I have added some albums to my library.

*Suddenly after a long time, there is added to one of these albums more than one primary artist (this was not the case when I added the album)

In the case that we discussed above, these artists are stemming from TIDAL. In different instances the primary artists may stem from different sources (TIDAL, our metadata providers, file tags). With that in mind, for each of these cases the same is true as above: The primary artists for an album will exist as Artists in your library.

Just to clarify this — This album was never added by you in Roon or TIDAL? Or it was added, but for a different artist?