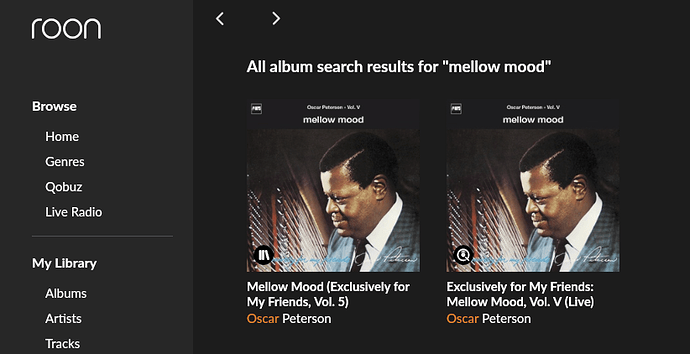 I was just listening to an Oscar Peterson album from my local library and wanted to compare it to the version available on Qobuz. However, I was surprised that the Qobuz album did not show up in the versions tab (in fact, there was no versions tab at all).
After performing a separate search, I was able to locate the Qobuz version but it has a slightly different album name. The version in my local library is properly identified by Roon but the Qobuz version does not show up in the options when identifying the album.
Is there any way to map the two albums in a way that they show up as two different versions of the same album?

Thanks for your question. I’d be happy to explain what’s causing this and show you how to group these so that both appear under the versions tab.

These titles weren’t recognized as the same album due to the differences in Album name seen in your screenshots.

That will do it!

Thanks @jamie. This is useful.