I’m using a Rock Core with a supported NUC and a McIntosh D1100 via USB. It was working great with a small issue from time to time: Roon will not list the device as available but It will be easy to fix by just turning it off and on again.

at some point in time my Roon got updated and yesterday I started to hear some “click” noises. After some troubleshooting which included reinstalling the Rock from a pen drive It only got worst (it sounds completely distorted)

Funny part is: If I connect the same DAC via USB from the “remote” Mac I use, running through the same core it works great… Allso usdin a DA1 Dac connected to the Core directly via USB also works great…

Sorry if this is obvious, but did you check the USB cable? It’s not clear if you’re using the same cable for the NUC and the Mac. Also, just because the cable works for the Mac, it may not work for the NUC. You might try swapping in a different one just to eliminate that as a source of your problems.

Make sure, you compare your Mac’s and NUC’s audio settings, as well as Roon’s device and DSP setups between your different connections.
It’s likely that the difference is to be found there.

There is nothing to setup in the NUC to my knowledge as it is running Rock. The Mac is pretty much default. 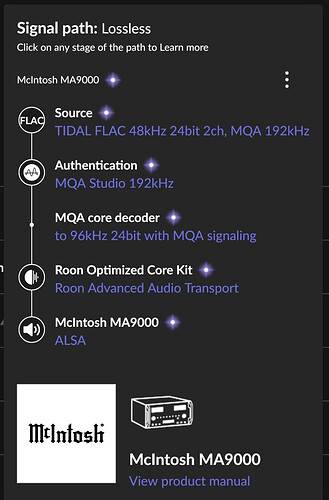 Was about to pose the same question

In theory the DA1 and the D1100 share the same USB Chip: Bravo SA9227 from SaviAudio

Is there a way to reproduce as an audio clip this bad sound? Or describe it better?

Might I also suggest you turn of the MQA option in the device settings and also try with non MQA
titles and see what happens.

The problem with that is that those certified endpoint connectors are likely dependent upon device-specific ASIO or WASAPI software; you are better off not trying to trick Roon by telling the software that it is an MA9000. Just configure it to be what it actually is. Sure, you won’t have a nice icon. But the icon isn’t important. The sound is.

first it was digital “clipping” like a scratched CD “tic tic tic” like the DAC receiving corrupt data, now its just distorted. McIntosh is well documented for considering MQA not good enough and lousy and hence not supporting it in favor of DSD (same as PS Audio but they do support MQA at least in the Perfect Wave series). Side note: not arguing about MQA, just making a point that they don’t support it and why.