My library is on a Melco N10. Roon core is on a Qnap HS-251+. These are both on a netgear switch.
I have a problem which has occurred two or three times, where the Melco loses its IP address for some reason, and I have to restart it. My problem is that Roon refuses to recognise the network share containing my library, despite the fact that the share definitely exists on the network. I have fixed the problem twice by trial and error, but each time Roon had to re-import the entire library, and do its indexing etc., which takes a huge amount of time.This is a pain, and very inconvenient if I have a guest, etc.
What can I try?

Does the Melco N10 use DHCP and get a new ip address when you restart it? If so, this could be why Roon thinks it has to re-import your library. You could fix this by reserving an ip address for the Melco N10 on your router assuming your router supports address reservation.

I use a Netgear Orbi router which has the option: 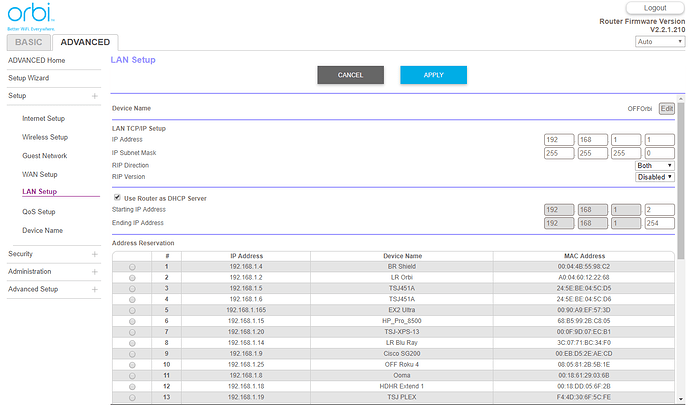 Thanks Tim,
I am not keen to go down the road of reserving IP addresses, if I can avoid it. Any thought on why Roon cannot see the network share although it clearly exists?
David

Sorry, my best guess is that it’s due to a change in ip address which forces the QNAP to see it as a new device.

Not sure why you want to avoid ip address reservations. In my opinion they make managing devices easier and keep things running smoothly. I currently have 34 setup on my router.

where the Melco loses its IP address for some reason

Imho, this is the first issue to sort out. It shouldn’t be losing its IP and something is not right. When the Melco loses the IP does it get the IP same back or a new IP.

Next time, before correcting the Melco, shut down the RoonServer, then get the Melco straightened out with the same IP it had before, then turn on RoonServer. This might alleviate the rescan issue.

Tim,
Following on your post, I restarted the Qnap, and Roon can now see the Network Share, so I’m back to normal.
I don’t know enough about DHCP to make a judgement about disabling it, but it has always worked fine for me.
Thanks
David

Daniel,
You will see from my reply to Tim that I’m up and running again. I’ve no idea why the Melco might lose its address. I guess I will have to take it up with them.
Thanks,
David

That’s great! Still curious though, does the Melco get a new IP or the old one when this situation occurs?

One quick thing to try is I would plug the cable from the Melco into a different port on the switch to eliminate the port on the switch as a cause. And, as you mentioned, give Melco a shout and ask what they might think is the issue.

Daniel, this is such an intermittent problem (maybe once a month), that it is not really susceptible to that kind of probing. If it becomes more frequent, I will try to pin it down. For the moment I am happy to have apparently found a quick solution.
Thanks again,
David

Glad you got it working. Sometimes hard to believe that rebooting is still required to fix problems in 2019

Address reservation is a feature of DHCP that ensures that a specific device always gets the same ip address. DHCP still works as it always did for devices without a reservation.

Thanks Tim. I presume that either the Roon Core program or the Qnap (or both?) is latching on to the IP address, even though that is not the way I try to run things. So if the Melco loses its IP, Roon or Qnap has a meltdown?
David