And after four days of normal usage the RAM is at almost maximum usage again.
Here you can see a list of when the RAM usage exceeded the configured threshold of 90% in Zabbix (monitoring software). 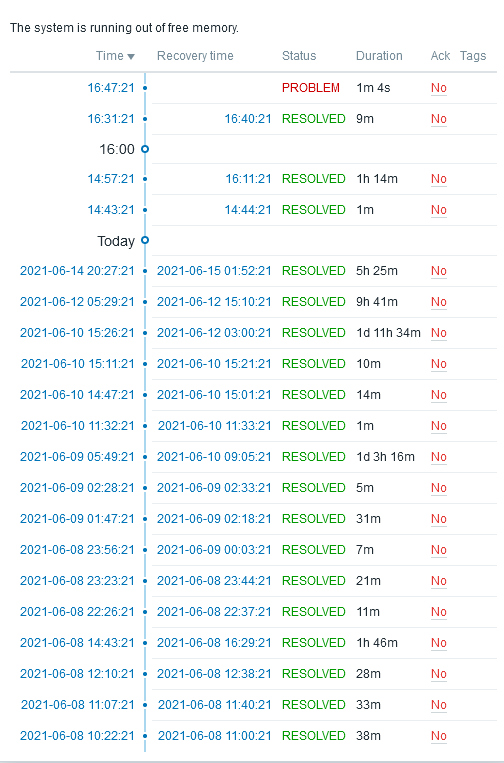 All my VM’s are running 180+ days without a reboot or me having to look after them every week, except Roon which is a bit annoying to be honest.

Edit:
I might go ahead and configure a cronjob or something to restart Roon automatically every night as a temporary fix. Please let us know when there is a update regarding this incident!

Same issue on Ubuntu Server - I have to reboot every week as the memory usage slowly creeps up each day.
Like the idea above of a temporary cron job fix.

I am also on Ubuntu Server; my observation is that the problem gets worse with increasing library size. But there is no need to reboot the Ubuntu machine; just restart the roonserver service, this does the job.

Only for Linux users:

Hi guys, I’ve setup my Roon service to reload every 2 days currently and thought you all might be interested in a simple and effective way to do this:

Example configuration of how it should look: 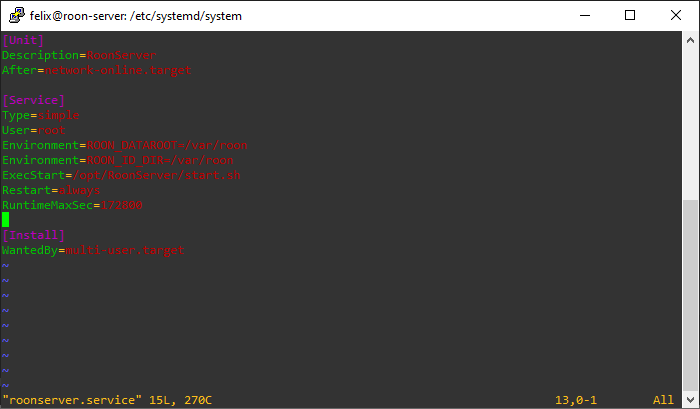 Still can’t quite wrap my head around why Roon uses that much memory, my VM was on less than 20MB after 6 days of uptime (of the available 2GB). Not sure what exactly the devs are doing, in what language they code or whatever but it’s clear that they’re not freeing memory properly. Clearly they haven’t heard of garbage collection…

Disclaimer: I haven’t taken backups in consideration here with the restarting, since I backup the entire VM every night. Not sure how these restarts might effect your Roon backups / database integrity. Use at your own risk and make proper backups!

Better just run this on cron so you can define the time and frequency.

Restart the service every other night at 3am

This is a nice tool for the frequency: crontab guru

I backup to Dropbox every 4 days. Yesterday I did a forced backup and noticed 2 hours later that memory utilisation jumped by 16% and remained at that level. After restarting Roon server it returned to normal levels. This morning my scheduled backup excecuted and again memory usage jumped 16%. I have a QNAP NAS, 8GB, and core on a USB attached solid state drive. It seems like backups are causing issues with memory.

I have a huge library and suffer from memory leaks. I run Roon Core on an Ubuntu server running on a Proxmox server. I just re-rebuilt the server from scratch and reinstalled Roon from scratch and did not add any library files for a couple days. With a library of zero files my systems memory leak reached it’s limit of 16G in two days. Library size seems to have nothing to do with memory leak.

Similar setup. I am using a vm of linux mint on proxmox. Linux mint has 4 Gb ram. I have 667 albums. If I restart the VM, Roon server already takes 1.7 Gb. After playing an hour it increases to 2.6 Gb. It is fairly stable but this morning client did not start up due to database corruption. So I had to reinstall. I try the nightly restart…

I cannot restart the roonserver.service. If I use ‘systemctl restart roonserver.service’ I get “Failed to add a watch for /run/systemd/ask-password: inotify watch limit reached” If I search what kind of inotify watches are consuming the system I see only some 30 RoonApplication watches. Any idea? I use 4 Gb ram.

Hi @John_Warden — I can confirm that this is something we are working on. The ticket is with our development team currently and it’ll need to be tested by QA after that, so these types of issues can definitely take some time. However, this remains a priority issue for us, and we’ll be sure to let everyone know when we have an update on this.

Just checking in for an update seeing as it’s over three months since your last message.

My current work around is a regular stop-restart scheduled twice a week on my Synology DS418play. But of course we shouldn’t have to resort to these various types of workaround. Or perhaps Roon should, in the absence of a proper fix for the problem, implement their own workaround by offering a mechanism to automatically restart the Core at regular times/intervals for folks who haven’t got their own workaround. 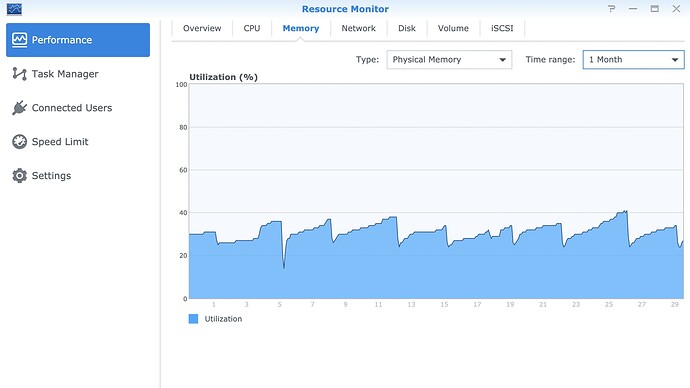 I reboot either Roon or my Rock on average once a week. For me slowness is exhibited by a pulsing Roon logo.

What symptoms are the rest of you experiencing?

Have not seen any resource issue and never reboot the core.
Think it’s been off twice due to power outages since I got it which is over 6 months for sure.

well, you’d think the logs would tell the tale. presumably roon has some insight into these cases and why this behavior exists. and presumably a fix is in the next build. there’s too much squeak in this wheel to avoid the grease.

I wonder if these problems are, at least in part, caused by inefficient garbage collecting of the underlying Mono framework. And if so, what could ultimately be done to resolve these issues…

In my user experience, as a Roon database grows in terms of object count and complexity, ever more frequent server restarts are needed to keep the system usable and performant.

… presumably a fix is in the next build …

I like your sense of humour! This thread was started in February and referenced 9 earlier threads, the oldest of which was started in 2016, although it’s fair to say that most of the complaints have been raised in the past two years

@dylan, on last Feb 18th I started this topic with reference to earlier threads (some from long time ago). On May 20th you wrote that RoonLabs is investigating this issue and that it has priority. I am curious about the status of it. Can you tell us more?

Thanks in advance for your reply!

Another thread, started two days ago…

For folks with large libraries, this is a known bug. I’ve inquired countless times and several folks have brought it up but it just appears to be something that continues to be overlooked. I just pray someone from Roon is looking into it for the next full version. It completely bums me out when I want to switch tracks and have to wait over 30 seconds. Ugh…

On my Synology, I added a Task in the Task Scheduler to Stop then Start again the Roon Service.
It was driving me crazy…

Hi @dylan What do you think about this suggestion? If the real solution is still some time away, it would go at least some way towards addressing an acknowledged problem and should be quick and simple to implement. You might even make it the default option to stop this steady stream of new threads on the subject. And I guess that there are many more users who suffer in silence, or simply give up on Roon.