I use Roon core and app (latest versions) with a Synology NAS and Windows.

I noticed that Roon does not show the correct file name for these series as it is listed in Windows Explorer (see picture). In the album editor, for example, it only says: “Hifi Visions: Pop”, so the CD number is missing. 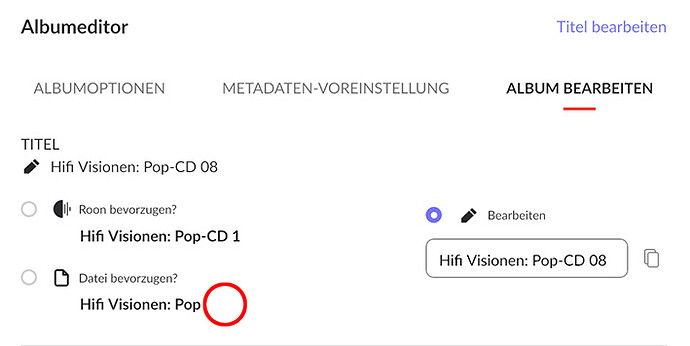 You edit your albums & if you choose, you can use filenames rather than Roon’s chosen metadata.

Here is a good place to start which will lead to much reading on grooming your collection….

Dear Paul
Thank you for the interesting but general comment. Unfortunately, it does not help here.
Arno

Seems to be pretty much the same as was already discussed in:

Content you’re reporting an issue with Screenshots in text below. Have you made any edits to this content in Roon? No. Is the album identified in Roon? No. Is this content from local files, TIDAL, or Qobuz? Local Files. Screenshot of import settings [Import settings] Description of the issue I am ripping & tagging my Prefab Sprout remasters & the album title needs to include the expression: Blu-spec CD2 Unfortunately, when I write it like that & save the files from Yate, …

The answers: No / No / Local files
And the import settings are the same for the whole library. But the error appears only for the mentioned series.

There is 1 anomaly: Why doesn’t Roon show the filename of the local file correctly, as it does in the other cases?

The answers: No / No / Local files

Sorry but I don’t know what questions you answered here. I didn’t follow this other thread closely because its content isn’t really relevant to me. Please click on the blue thread title to visit the thread and see if he contains answers or workarounds/solutions to your question(s).

Why doesn’t Roon show the filename of the local file correctly, as it does in the other cases?

It is unlikely that Roon displays an incorrect filename. Are you talking about the picture in the first post?
The filename is nowhere displayed in that picture. “Datei bevorzugen?” is just an indication of where the displayed information comes from. For tagged files it’s most likely the content of the respective tag and Roon may have altered that if it feels the need to do so. For album titles, the foldername or parts of it may also play into what gets displayed here. More detailed information can possibly be found in the thread I linked.

As @BlackJack suggested. It looks like issue with tags, you can check them in windows file properties (see screenshot) or use mp3tag… 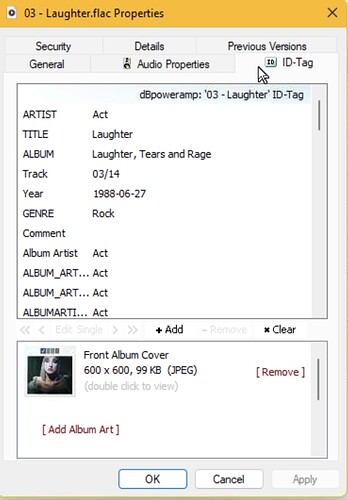 The tags are ok. Here is a current example from today.
Roon showed the following albums in 1 album: 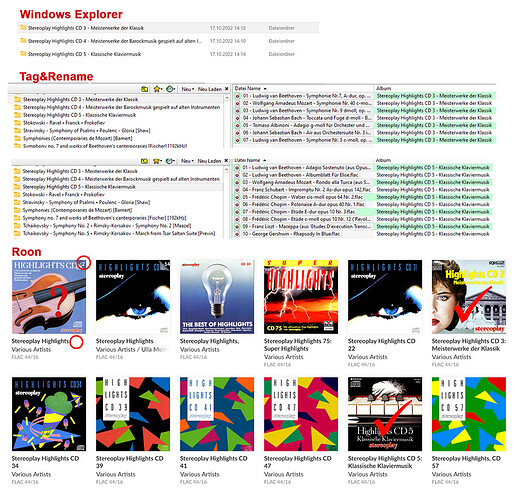 Would you be so kind to forward the problem to the Roon developers?

Hi Arno, both @BlackJack & myself are regular forum users (not roon support team) so we can’t refer you to support, that said @support will no doubt be watching all post in the support thread.

While you’re waiting there’s a section on merging albums, i’m not sure if you’ve seen it, but it might be useful.

Thank you for your efforts. I hope that the official support will take care of the problem soon. I am slowly losing patience and trust in the software.

In the meantime I have found quite a few albums of series that Roon has summarized. For some albums I noticed that the CD no. from the title (e.g. “53”) was present in the tags instead of CD no. 1 (= treat each album as a single item). But even after the tag correction Roon remains with the wrong representation.

For “Touch Yello” two tracks were wrongly numbered by me (“00” and “-13”). Roon has formed a separate album for these tracks. Again, Roon refused to accept the correction and continues to show 2 albums. Moving and re-reading the folder didn’t help.

It seems that Roon no longer corrects its metadata in certain cases.

The Yello album problem can pretty certainly be resolved with the merge functionality.
Merge really takes some time to “get your head around” but it does work (merge two albums into one and also includes track renumber & location within the album).

Yes, thanks. I did so.
Arno