i have a general problem about merging artists… i’ll consider the following example: 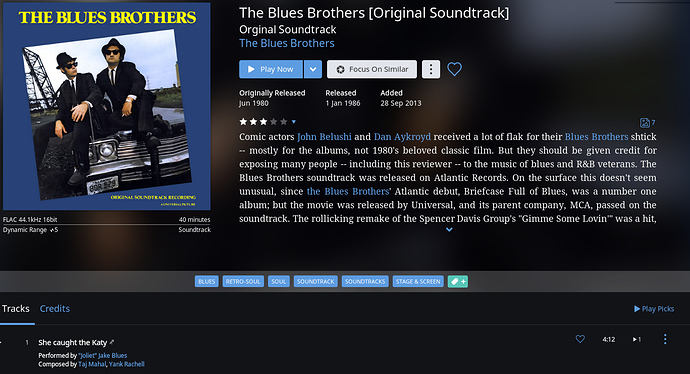 as you see, there is a performer “Joliet” Jake. that is the same John Belushi, reported in credits as a primary artist.
i’d like to merge them.
ASIDE
actually, i would like in this case, as in many other cases where there is an alias fake name, to keep it, and that the link should point to a common primary artist with his/her name and (as i’ve seen in some cases) under the name an indication like a.k.a “Joliet” Jake Blues. but i don’t know if this is something possible in roon (it should, at the end, it’s possible in microsoft word

anyway, here i would like to merge them.
but it’s impossible because they don’t appear in the same category: if i search Jake, he results only as a perfomer. while Belushi results as a performer and a primary artist (TOP RESULT).
there’s no way here to see them together, select and merge.
only solution is to “promote” Jake as a primary artist (creating the link in album edit), then merge and then remove the link. kafka style.

so, here my 2 pennies of suggestions, that i have reported also in the features request section.

in the meanwhile… maybe i’ve missed another correct way to merge these 2 artists in this case?
thanks