Was this video where Paul of PS Audio is telling more about MQA
removed in the other thread because of this? 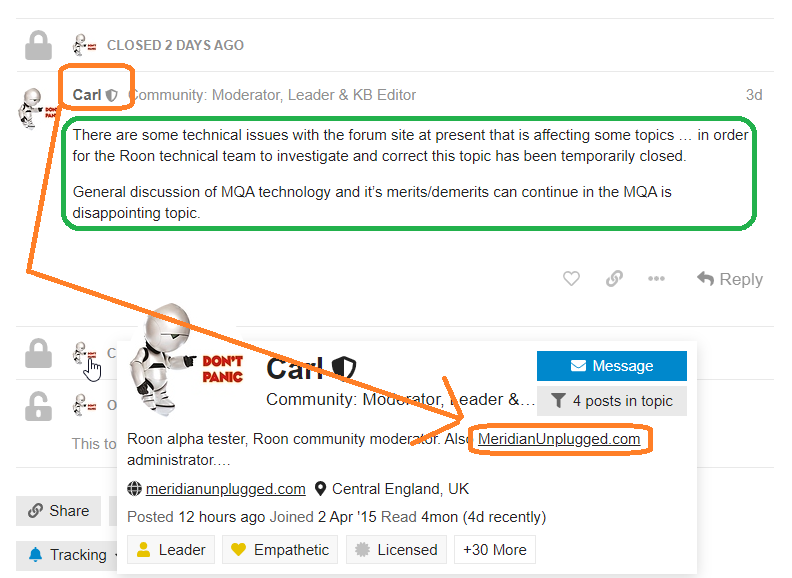 No it was removed after it was flagged because it was “off topic”. The 50 posts just above it that also were “off topic” were not removed. They also didn’t show a video where MQA was questioned.

MQA can be a contentious topic and rather than have multiple threads where the same users flog the same dead horses the Moderators prefer to merge threads into one MQA discussion thread, which is “MQA disappointing”.

Moderators have flagged and actioned posts in this thread, please observe the Forum guidelines when posting,

I set that topic to be closed for 48 hours, that was to give the Roon team time to fix the technical issue that was preventing flagged posts from being managed correctly.

After 24 hours the topic, as you noticed, automatically re-opened. I’ve not heard back from Roon but the technical problem is still there. Let me tag @dylan for an update.

You are correct that I am a moderator over at MeridianUnplugged, I have been for years, however, that site in fully independent of Meridian or MQA limited and has no bearing on this matter.

I run a Meridian system at home, that used to include Sooloos which is the forerunner of Roon, I’ve “worked” informally with the Sooloos / Roon team for many years and hence why I was invited to be a moderator on here.

None of this makes me a Meridian or MQA (or Roon) fan boy, I’m often critical of them but again my personal opinion has zero bearing on how I undertake my moderation duties which by and large is a team rather than individual effort.

As already explained to you in PM by myself and @dylan …

Your post was flagged as being off topic, that was agreed with, however, it and the replies could not be moved over to the MQA Disappointing topic due to a technical issue. You will note that the duplicate post over in MQA Disappointing was not flagged and still stands. This is not about censorship just maintaining a sense of order of the forum.

As soon as the Roon chaps fix this issue, things will fall into place once more.

I’ve just tired again … there is still a problem. 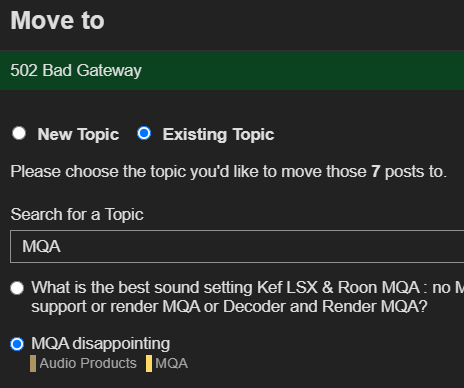 I’m going to close that topic again, but this time I will not set an automatic open time as that seems to also create confusion.

@dylan, please let me know how your team get on tracking down this issue.