Just curious whether anyone here has been looking at the Meridian 218?
It has been ’ imminent’ for release for a while, so should be close to dropping.

I am using a Meridian G68 surround controller with a singer su-1 to convert the usb out from the SoTM sMS-200 to coax, so my 96kHz G68 dac can convert things. Not the cleanest of setups.

Been wondering whether the 218 will be able to make my setup less convoluted, with similar sound quality, adding in full MQA at the same time.

So, i could potentially add the 218 in between my G68 L/R speaker out and amplifier.
In case I play surround, I put the 218 to the analogue input.
In case I want to play stereo I then use the network sooloos endpoint and Roon to control things (assuming Roon can do the volume control for the 218).

The key challenge I see with this setup is that in order to use the full MQA unfolding in the 218, it seems I will need to forego the convolution Roon offers.
And I am pretty sure that the convolution benefits are bigger than the MQA final unfolding step(s).

Curious to see (when it becomes available) how Roon’s MQA implementation is dealing with this. In theory, it could recognize the 218, determine it is fully MQA capable, and then do a full software decode for a 218, after which it can add convolution and send it to the 218, skipping mqa conversion in the 218. Covering all the requirements, mine and MQA ’ security’

Any others out here contemplating a 218? Setup thoughts?

Not really considering it myself ugly little box IMHO and apparently sound quality on a par with a Meridian MS200 excluding MQA of course! It offers analog in and out NOT pass through and of course no MQA output over digital coax.
Latest update on availability is end of April although I wouldn’t bet on it!

Yep, ordered a 218 some time ago, solely to add MQA functionality to my system.

And of course I connect the internet-input on the 218 to my LAN, which would therefore allow it to show up as a Roon endpoint.

This apparently enables the highest-level of full-fat MQA decoding / unpacking / rendering, so I should see (on the DSP speaker display) and hear the maximum possible resolution offered.

I’d then play Roon (MQA) through the 218 & still have the surround / processor connection from my 861v8 for every other flavour of input signal.

As soon as these little magic boxes arrive, let’s see if the theory works !

Have Meridian given you any reason for the delay in 218 shipping?

Errrrrrr…I think you know the answer to that !

*edit
Just sent Meridian an e-mail, to which they ‘promise to respond within 72 hours’.
It’ll be a shame if they simply refer me to my Dealer - who after all - probably won’t know any more than we do…

Wondered as you had preordered if they had communicated with you?

The ugliness is not stopping me, I will just hide it away somewhere.
If it sounds like the ms200 though… I used to own an ms200, I don’t anymore…

By the way, I don’t see why Roon would not be allowed to provide fully unfolded mqa output over digital, adjusted for the 218’s dac as it recognizes that. As it adjusts the digital output for the 218 dac, it would be useless if you’d like to record it as a clean unfolded stream for use on different devices. It would add in the ability for Roon to add convolution etc on top of the fully unfolded mqa stream.

Ok, sounds like I should not get too excited about the 218, unless Roon performs the aforementioned miracle.

The ip control app for the 218 is in the Apple App Store. It won’t control older Meridian IP kit though. 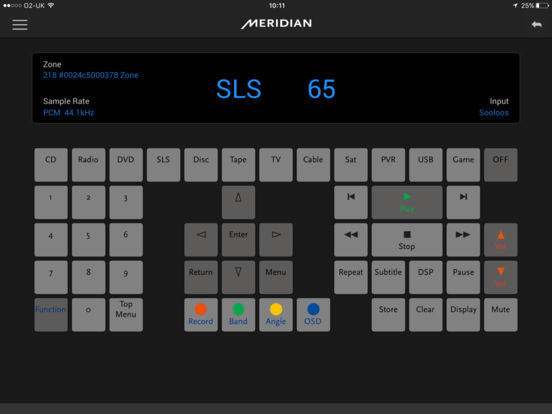 It’s only for new generation IP controllable Meridian products, the first of which will be the 218.

It’s more like a ‘Direct IP’ version of vMSR, without having to use a Global Cache box, for their next generation of products.

It doesn’t replace Core control, or have any Sooloos control, other than it will be able to select the AUX/SLS input and control the volume.

I see no reason to assume it will sound like an MS200. I will find out soon.

The ugliness is not stopping me either, but the lack of display or front panel controls is.

I need something that can be controlled at a basic level without the need for an iPad. In other words a version more like the AC200 (from the control point of view) but preferably in a nicer box.

Sadly it won’t quite reduce the number of boxes as I’m going to need an Optical to Coax converter as the digital inputs on the 218 are more limited than the 218.

I shouldn’t need to worry about front controls as the comms should work via my DSPs.

I plan on replacing 2-3 zones where I currently use MS200 or MC200. The MS200’s have been ok, but the MC200 has had some power stability issues, which is annoying so if the 218 … 1) sounds better and 2) is stable both power and software - wise … then I’ll give it a whirl and replace all. Standing by to get some feedback re: SQ improvements using the 218…

The Meridian 218 should finally be available next week…

My question is not whether it’s Roon-Ready, but whether Roon’s ready ?! @mike @danny

It is a Sooloos endpoint so should work the same as any other.

Fingers crossed that it accepts 192/24 natively over LAN…