Meridian MC600 setup zones are not listed in order [Resolved B247]

I have made the move from Sooloos to Roon and it was pretty smooth sailing.

I am posting this to share my experience with integrating the zones on my MC600. I just want to point out that the zones are not listed in order on the Roon audio setup page. I use three of the six zones and I had to use trial and error to get them setup properly. It’s not a big deal or even terribly inconvenient but it was a little confusing at first. I’m not sure how many MC600s are in the wild but I hope this helps someone in the future if and when they make the move.

Can you show us a screenshot of what the settings page looks like?

There is a user on meridianunplugged.com that just tested Roon with his MC600 and reported no problems with the zones he uses.

I know that doesn’t directly help here but it hopefully suggests a setup issue rather than design issue.

I’m the Hitchhiker using the MC600. Before I did the NUC/ROCK install, I just looked to see the MC600 zones but I didn’t use them because I was still using Sooloos in the house. Now that I’ve migrated, it’s all set. The zones are there and they work. They just are not in order. Again, no big deal. 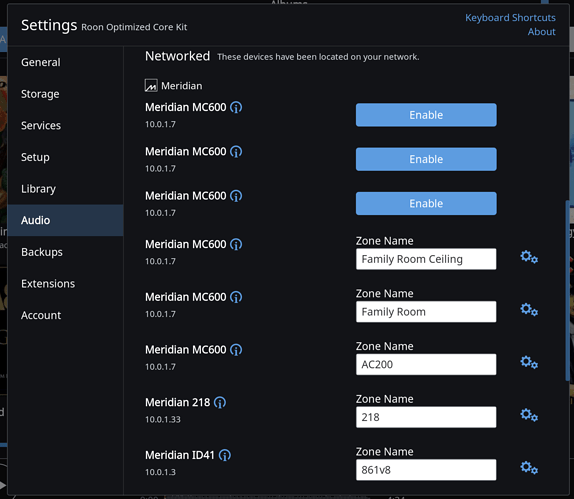 @support, can you make sure this screenshot + logs of @Will_Morr’s core starting up and discovering these devices end up in a ticket?

Thanks Bill. I hadn’t made the link

Hi @Will_Morr ---- Again thank you for the report and sharing this observation you’ve made with us. Both are very appreciated!

Moving forward, I would like to collect some logs from you. As mentioned in Brian’s post, would you kindly please restart the device hosting your core, confirm that all your devices have been discovered, and then follow the instructions found here to upload us a set of your Roon logs.

Hi @Will_Morr ----- Thank you for the follow up, confirming that all the materials (logs) have been received and passed over to my tech team for evaluation.

Once my report has been updated and passed back, I will be sure to reach back out with the team’s thoughts/findings. Your patience is very appreciated!

I had the same issues. I have been using Roon since release with a Meridian MC600. The endpoints were mixed up in order also. No problem just renamed them.

Initially I did have a lot of problems with Sooloos “stealing” back endpoints. Finally, figured out how to shut down the core and just run the endpoints. There has been no problem since I did that. Now I just have to remember how to restart the core to get my wite’s old playlists off of Sooloos. Can’t seem to find how to do that in Meridian Sooloos Configuration.

The latest release has corrected the zone order on the MC600.