This isn’t actually Roon’s problem, but I’ll mention for the record, as the titles Roon gave for disc 1 in the cited album led me down a path (I had to listen to all the tracks to understand the problem). As far as I can tell, Roon was simply getting the information from elsewhere, perhaps AllMusic. I’ve submitted the following to AllMusic:

Disc 1, tracks 2-16, on Relativity 88561-8140-2. First, there are 16 tracks, not 17 as you show. What you show as track 2, “Valjean Arrested/Valjean Forgiven” (Constables: “Tell His Reverence your story”), simply isn’t there as a separate track on the physical CD (eg, the one I have). Instead, the song and music are incorporated into the latter part of track 1 on the physical CD.

Hi James, I can’t seem to find which metadata you currently have, but you can find the correct metadata, corresponding to the MusicBrainz release you’ve identified, in the identification wizard using search terms:

The Identification Wizard (in Album Editor, Identify Album) says these metadata are being used at the moment: 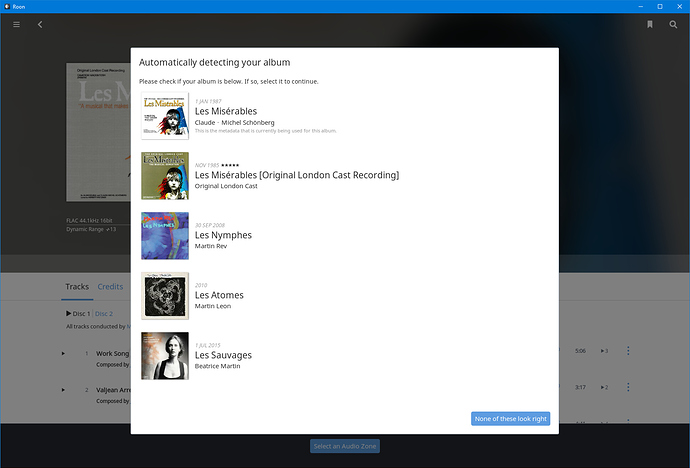 I’m not sure how to follow your instructions for search. When I click “None of these look right” in the “Automatically detecting you album,” I get “Manually search for your album”: 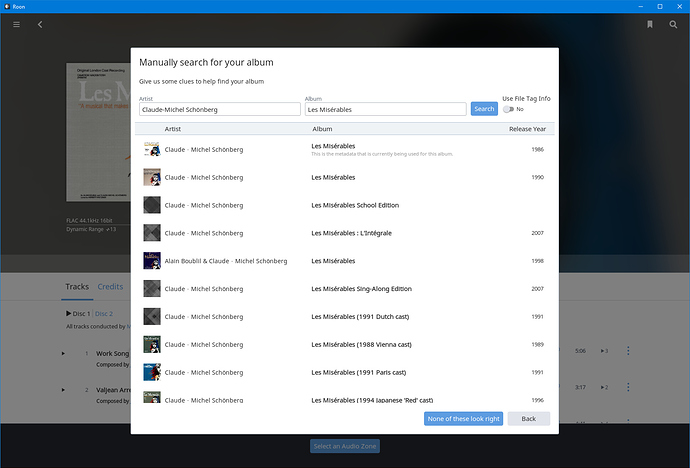 Clicking on the second entry there gives “Let’s make sure everything is in order,” track titles in what appears a Nordic language and a warning “28 tracks don’t match …”

Clicking on the first entry there (described as “This is the metadata that is currently being used for this album”) gives “Let’s make sure everything is in order” and “1 or 3.” This track listing looks right, at least in that 16 tracks on disc 1 are titled; but track 2 is titled “Valjean Arrested/Forgiven,” about which I complained to AllMusic. If I choose 2 or 3, I get a warning “16 tracks don’t match …,” and there are 17 tracks on disc 1.

So I don’t understand how to pick up the data from Musicbrainz.

It’s the one that you are already using, but edition 2 of 3.