I have a classical album (4-disc set) and Roon has identified the set correctly and is using the metadata from AllMusic (so it appears). The metadata for disc 3 of the set is not correct in AllMusic and this is reflected in Roon, however the metadata is correct in MusicBrainz. I have submitted a correction to AllMusic but I was wondering how Roon accesses metadata from the various available databases. Why is Roon selectively using AllMusic and ignoring MusicBrainz? Sorry if this is a bit vague but it is frustrating that the correct metadata is out there but I can’t access it in Roon.

Rovi is Roon’s default metadata provider. Tag the album using Picard and tell Roon to prefer your metadata for the album in question.

First I’ve heard of Picard. Can you compare it with MP3Tag (which is what I’ve been using)?

From what I can tell Picard tags your music files with the metadata contained in the MusicBrainz database. MP3Tag is a manual tagging program where you supply the data.

That pretty much sums it up - it you want to autotag stuff leveraging musicbtainz metadata then Picard is the way to go. Have a look at their Picard plugins also.

mp3tag can be pointed to use MusicBrainz, can it not?

It’s not as easy to use as MusicBrainz, for sure; but I didn’t remember being locked in to AllMusic.

Another option is the SongKong automatic music tagger, this uses MusicBrainz as its primary source, but also uses Discogs, which is very useful as a secondary source

Thanks everyone for your responses. Unfortunately, tagging my files is not the issue, I have correctly tagged the files. I was hoping for some kind of response from Roon on this. The problem is two-fold: First, as originally posted, the metadata for disc 3 of this set is not correct in AllMusic, but it is correct in MusicBrainz which Roon is not using. Second, if I select for Roon to use my tags rather than Roon-source data, Roon still uses the work titles found in AllMusic which are not correct for tracks 1 through 4. The attached file shows what I get if I leave the album unidentified. I have found no way to get Roon to actually use my tags for the work titles. 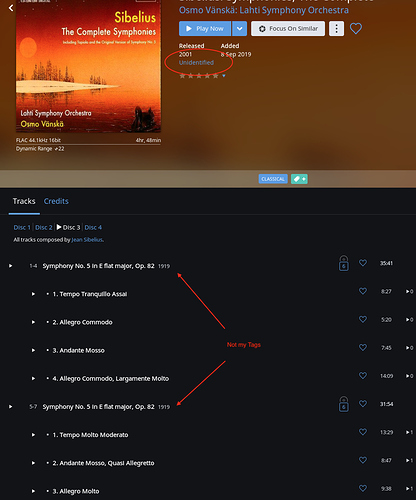 There are various feature requests outstanding now for several years to make single part and multi-part compositions behave the same way. I might be wrong but I don’t think there was ever a fix so this is not really a case of finding a way of forcing roon to use musicbrainz or other metadadata source in preference to rovi but a more general composition identification issue. Similar problems arise if you want to distinguish different transcriptions for different instruments. Sometimes if the different scores have different opus or catalog numbers, for example a complete ballet vs. a suite then you can force roon to distinguish but it is a lot of work and roon automation often gets it wrong initially.

I have the same issue with some albums. So if I well understand it is not possible possible to get metadata from musicbrainz if roon detects a similar album from Allmusic (and have it in its database) ?
If so, it should be a must have feature to be implemented (lot of album are well tagged on musicbrainz when on allmusic they are not)

If so, it should be a must have feature to be implemented (lot of album are well tagged on musicbrainz when on allmusic they are not)

IMO MusicBrainz should be primary dataset with Roon only using AllMusic if no match found in MusicBrainz. The MusicBrainz database is better designed and there are not problems with incorrectly identifying different artists that happen to have the same name. There are some issues with how Classical releases are added, but the data is there, just slightly awkward to access it.

AlMusic is a larger database than MusicBrainz, but thats fine since if the release is not in MusicBrainz then Roon would use AllMusic anyway, and of course it is free to add new releases to MusicBrainz and then available to all Roon users.

It’s been 17 days and still no correction in AllMusic. The AllMusic site just seems like another avenue to blast people with ads (not surprisingly considering who owns it).

I haven’t been using Roon for that long, and I really like a lot of what it does, however the metadata handling has been pretty frustrating.

Hi @Robert_Daines — What data on Disc 3 is incorrect? Can you share a screenshot?

@dylan thank you for your response. Attached is the screen shot of what Roon is displaying based on what is listed in AllMusic. Also attached is my file tagging per the CD booklet. Roon is not showing the two separate versions of Symphony 5: Original 1915 Version (tracks 1 - 4) and the Final 1919 Version (track 5 - 7). Each Work is shown as the 1919 version and no real information is provided for the Parts of tracks 1 - 4. If I leave the album unidentified, Roon will not show my file tags as shown further up in this thread. Please let me know if I may provide any additional information. 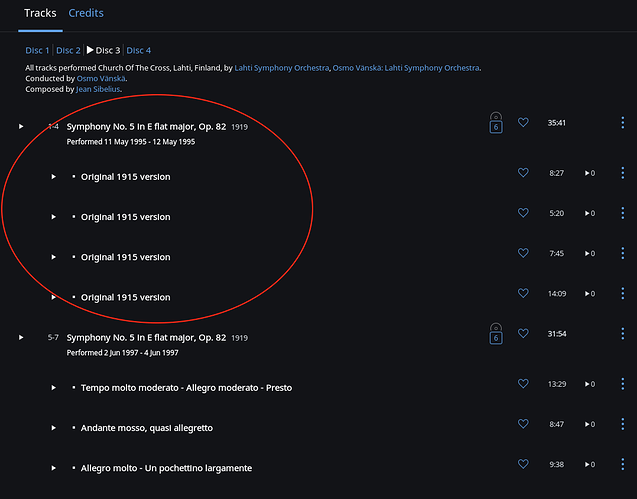 We’ve traced this to some bad data stemming from one of our metadata providers and we’ve reached out to them about correcting this. We’ll be sure to keep you updated once we have more information from them. Thanks for the report!

Hi @dylan. I’m going to mark this issue solved but it is still not correct, merely better. Roon still identifies both works as being the same, they really aren’t. As I previously indicated in my tags, one work is the Original 1915 Version and the other is the Final 1919 Version, this should be reflected in the work titles, not in the parts. Due to this error Roon is showing incorrect values for the number of occurrences of this work in my library. Sorry if I’m being picky but what’s the point of metadata if it isn’t accurate? 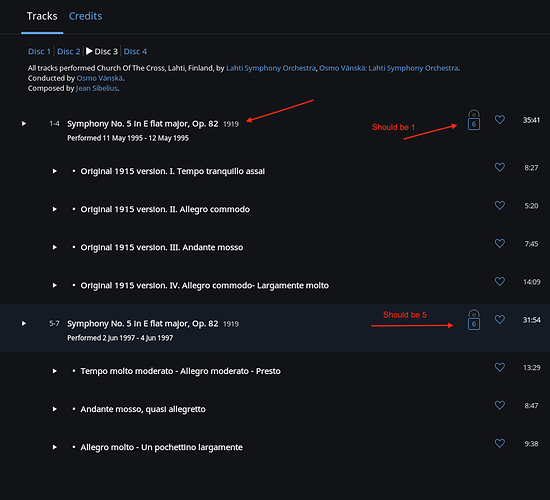 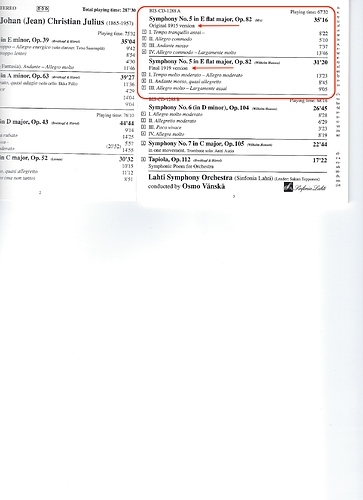 @dylan I decided not to mark this as solved and I was really hoping for some follow-up. It would be nice to get this metadata a bit more accurate. Corrections shouldn’t be this difficult. Cheers.

Would you mind sharing this album with us so we can take a closer look? You can send this via a shared Dropbox link or another file sharing service in a private message here on the Community site.

Hi @dylan. I have sent you a link via PM. Please let me know if there are any problems. Cheers.