Wired 1Gbps network from server to ubiquity dream machine WiFi router, 802.1ac WiFi from ubiquiti dream machine to iPad Air 3
WAN connection of the workstation on which the server runs makes permanent use of ProtonVPN

Bose loudspeakers connected to the audio out of the workstation.

“Metadata improver: paused” See picture. Indexing goes smoothly, no other issues I could spot. I’m in my 5th day of the trial period and the metadata improver never worked so far. Maybe VPN related? 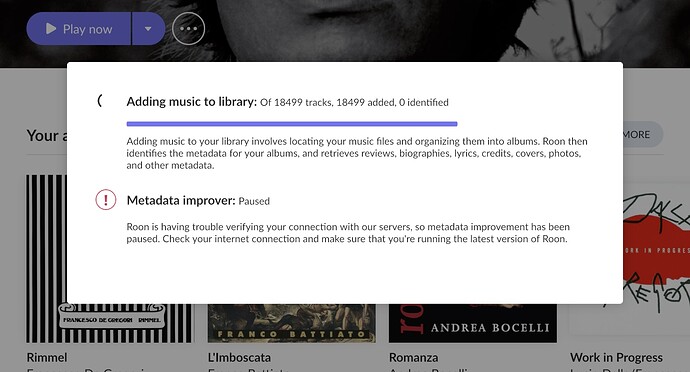 Update: I turned off the VPN and now it seems to work. Does RoonLabs blacklists IP addresses known as being exit points of commercial VPN providers?

No they do not blacklist IP addresses to my knowledge. More likely the VPN slows down your internet to a point where this error shows up. I’ve seen Roonlabs suggest to change DNS providers (to e.g. 8.8.8.8) but that would partially defeat the purpose of the VPN.

Come to think of it, instead of slower internet speeds and based on the dns recommendation’s of Roonlabs, it might also be a stale dns cache entry (ie. the VPN provider contains a no longer valid ip address associated with an address at which Roon checks for metadata).

PS: just speculation on my part

Thanks for the reply! It might have to do with NextDNS then… Nevertheless, I was thinking to configure Roon to use Wireguard to overcome network segmentation issues (I use different zones for home/work) and I found your excellent post about WG!

A post was split to a new topic: Metadata Improver paused error message

2 posts were split to a new topic: Getting metadata error message

A post was split to a new topic: Metadata errors for 2 weeks