Came across this tonight: 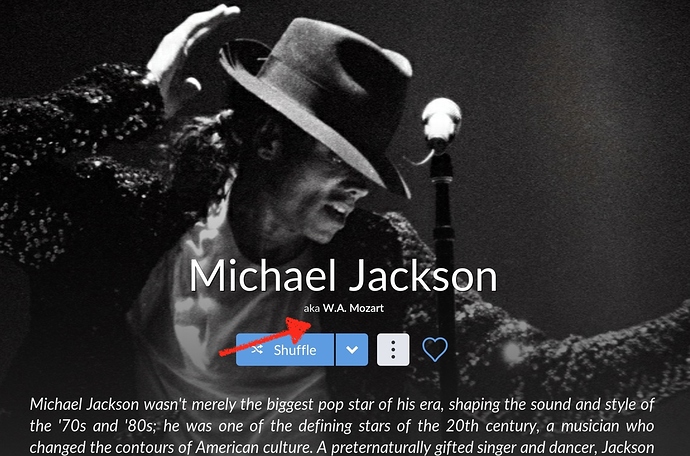 Both were big pop stars, still it seems a bit off.

In a book written in the 1970s, it was stated matter-of-factly that the young pop star Michael Jackson was the reincarnation of the musical genius Wolfgang Amadeus Mozart. And it now seems that MJ himself may have believed this to be the case. Could...

Well, thanks for the pointer. Then it is correct (according to that Simpsons song credit); it still looks a bit off - but well. Maybe I file a feature request for a “Reincarnation of” relationship…

It does look a bit off. I had the same reaction recently seeing to Miles Davis listed above the fold as “aka Cleo Henry” because of a one-off contractual technicality.

Another example is the many aliases of Bob Dylan. We’re presented with a list of AKAs but no context is provided. Who is Tedham Porterhouse? Oh, it was a credit for playing harmonica on a Ramblin’ Jack Elliot record. But there’s currently no way to find that out and subsequently listen without first leaving roon. The story of the Michael Jackson W.A. Mozart credit is interesting as is the Cleo Henry reference but roon is not (yet) capable of that level of dot-connecting. I hope eventually it will be!