So, who bought an LPS-1 to go with theirs?

(I didn’t as had just purchased an alternate, and only have two power points by my hifi).

I was considering the LPS-1, but lucked into a gently used Channel Islands Audio PS for a bit less money. Figured I’ll try that first. The Uptone email announcement of the LPS-1 I received said it went out to (EDIT) 6,000 + people. Alex will sell a few for sure.

I am lucky to be in the first batch - can’t wait to change my Ifi for the LPS-1…hope my high expectations are met. @Jesus_Rodriguez , can you share your first impressions?

You are absolutely correct.

I just doubled checked the email…6,000+ , my mistake on that. That for the correction. He’ll still sell a bunch…

I think only Alex owns, so far, a working unit

I don’t have one yet…I have to wait just like you guys.

Ordered LPS-1 too late for first batch (darn Bay Area morning traffic), on second batch, for my 2nd, still to arrive, microRendu. My current one has a Teddy Pardo LPS.

My current one has a Teddy Pardo LPS.

That should be a good comparison.

Yes, please let us know the outcome. I have the Teddy Pardo as well.

Mine arrived today and I’ve been listening for about two hours. Completely unscientific first impressions follow.

My mR was powered by the iFi iPower which was connected to a 240v/120v step down transformer, so I wasn’t expecting a big change.

Setup very simple. Set LPS-1 to 7v. Shut down HQP and RoonServer and power down server. Power down mR in the software. Unplug iPower DC input and plug it into LPS-1. Wait for red light to turn amber. Plug into mR. Amber light turns green. Power up server.

Expectations have been exceeded.

People have reported better bass response. Didn’t notice that. My system is active bass, so may be different in passive setups.

Other reports include more space and soundstage. Haven’t noticed that, but I would say there is increased dynamic contrast. Prominent passages are more prominent but the background instruments are easier to distinguish.

Perceived volume has reportedly increased for some. Didn’t notice that.

Some have described an attractive upper end zing. I would agree with that.

All in all, very happy. System has never sounded better.

Edit: mR is running as an NAA. Upsampling Tidal and local Redbook in HQP to DSD128, closed-form filter, ASDM 7.

Felt emboldened enough to switch Vega to Exact clock. So far no glitches.

It fascinates me how we can share an interest in music and not share the specific music. Of your list, I own only Joni Mitchell, and haven’t heard of any of the rest except Radiohead. There is so much to learn…

There is so much to learn…

It’s one of the joys of music that there is always something new to listen to. The What are you listening to now ? thread has broadened my music discovery so much.

I have lived with the LPS-1 powering the microRendu for a bit more than two weeks now and am deeply impressed. I would not want to be without it now.

There is an interesting physical confirmation of the effect on the dynamics of my system. I use Manley Snapper 100w tube power amps and they have a 500 mA B+ Slo Blow fuse. It used to be 400 mA but Eve Anna increased it a few years after release because the fuses were blowing too frequently with dynamic passages of music. I bought my amps second hand and one of them has a habit of blowing B+ fuses more than the other. It would blow a fuse every 10 months or so, whereas the other amp has only blown 1 (if that) in the 3 years I’ve had the amps.

After installing the LPS-1 I blew three B+ fuses on the sensitive amp in two weeks. They go in very dynamic passages where there were loud transients (usually electronic music). Nothing else has changed in my system that would account for the fuses blowing and the output tube bias is steady as a rock. I can’t see any sign of fault in any of the output tubes. After the second fuse blew I swapped the tubes between the amps to see what would happen and a third one blew on the same amp after the tube swap.

These are exactly the passages where I think the LPS-1 has improved the dynamics of the system.

The Slow Blow fuses shouldn’t be as prone to such blowing as they have been and I suspect that my batch of fuses wasn’t as Slow Blow as they ought to have been. I have changed to another manufacturer and upped the rating to 600 mA, so far all is good.

But I thought it was interesting to get such a physical response from the system to a change in power supply to the mR.

I have now had a few glitches from the Exact clock setting on the Vega and will probably change back to Auto because they are annoying, but their frequency is markedly reduced compared to Exact clock prior to the LPS-1.

I have received my LPS-1 and plugged it into the microRendu, which is plugged into the Geek Pulse Xfi (which how works again after a firmware update). The Pulse has an external LPS which also strips power off the USB in case it is dirty. Drives Audeze LCD-3 cans.

(I can’t use any of this with my main system which is Meridian 818+DSP8k.)

Two days of experience, I’ll report if I notice anything more specific.

Quote of the week!

I replaced an iFi plug in PS with the LPS-1.
The iFi was a small improvement over a standard wall wart; the LPS-1is another step up. It’s related to blacker background/less noise somehow. Every aspect just sounds a little better. Not a dramatic difference for me, but definitely noticeable. Was a worthwhile upgrade, IMO.

I have an LPS-1 from the first batch. I immediately noticed a more spacious soundstage. Definitely a nice step up.

I’m powering the LPS-1 with the Meanwell, but want to try my iFi 9V and HDPLEX. One of my favorite comments over on CA was that you know you’re an audio geek when you worry about the power supply powering your power supply.

You do realize that the guys at UpTone specifically have said that using the iFi or other upgraded PS will make no difference in the output of the LPS-1- by design.

The only way one of them could possibly have an effect is if they are injecting less noise back into your electric grid in your house and that is having an effect on your system. But the Meanwell is apparently quite good in that regard in any case, according to Alex at UpTone.

Just received one of these in the mail today, a nice alternative to the stock cable (from PSU > mR) that comes with the LPS-1. Ironically i have know idea if it sounds any better than the stock one since i’m still waiting for my LPS-1, but it certainly will look better! It’s a nicely made little cable actually, here’s the link and a couple of pics of mine. 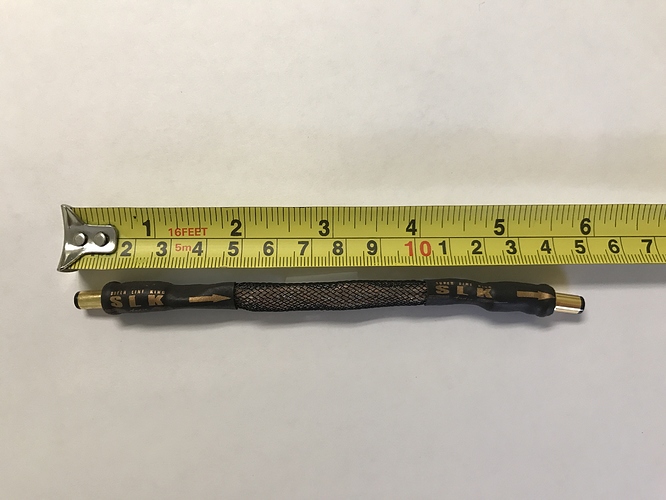 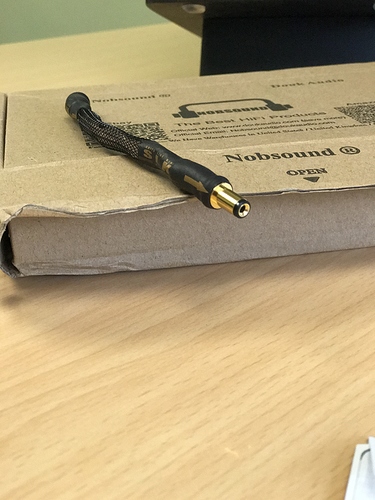