Migrated today from Macmini to Nucleus Plus following FAQ for migrating data to internal SSD.
Copied over database as described in instructions from old core to new core.
Then copied music file to SSD per instructions.
But date added has not come over correctly.
Nor has number of plays.
Help please
Thanks
James

I’ve moved this to the Support forum and flagging the support team with this: @support
Someone from the team should be along to help you shortly (but be aware that it is the weekend, so a little patience might be required). While we’re waiting, just a couple of questions about what you did.

You did update your Nucleus first?

And you did backup your database on your Macmini and then restore it on the Nucleus as described here?

Copied over database as described in instructions from old core to new core.
Then copied music file to SSD per instructions.

Just to verify, before copying over your files, did you remove all of the watched folders from Settings > Storage as mentioned in the migration article?

Thanks, and apologies for the troubles here.

Thank you.
Yes I did update the N+.
And I did back up and restore the database as described.
James

No I did not remove the watched folders.
I did not notice this step.
I have attached the screen shot you requested.
James. 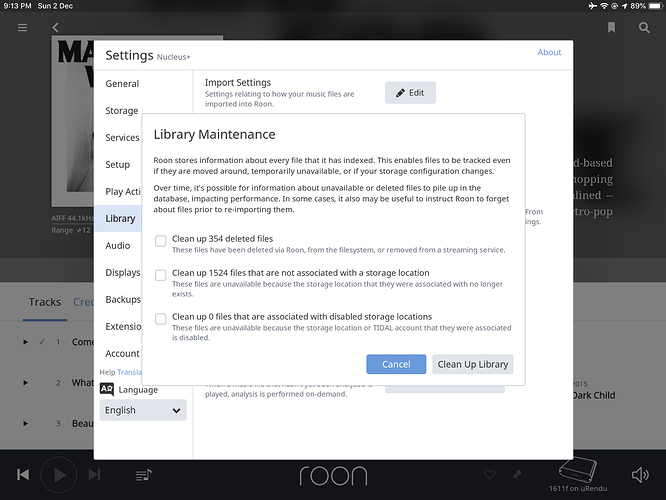 No I did not remove the watched folders.

In this case, since the previous watched folders weren’t removed before the music was transferred to internal storage, this means that the media was seen duplicated — once in your original storage location and duplicated from internal storage. This is why you are not seeing your edits and plays.

Do you still have access to the old Core machine? If so, let’s try the following:

Let me know if this resolved this for you.

Dylan
Done as described.
33 albums have come in with 3 Dec 18 - odd
remainder (1050) appear to have correct added date
and now i have number of plays for each track
so much of the way there
any other suggestions
thanks
james

Glad to hear that, for the most part, things seem to be working for you now! For those 33 albums — can you share a screenshot of Clean Up Library once more so we can take a look?

Looked into 30 albums with wrong add date and notices that a number of tracks had been duplicated.
So deleted 209 duplicates and the album s add dates reverted to what they should have been. General some time in 2014.
Odd but fixed.

I’m glad to hear that everything is resolved for you now. If you ever have any other questions feel free to reach out!