Hello - having quite a bit of trouble migrating to a new server. Same brand (Innuos) different model.

I have installed Roon and restored from a recent backup. The only difference is the music is in a different location (new server has a different IP). I had connected the original via SMB on my MAC and did the same with the new one. When I delete the old and add the new IP I end up with 3-8 versions of every album as it scans through the monitored folder. Any ideas on what I’m doing wrong or can try?

It would be helpful to see a screenshot of your storage settings (Settings>Storage) and if it is workable a high level view of those folders from whatever OS you are using.

Usually, multiple versions arise from inadvertently including a folder more than once. For example, one includes a high level Music folder and also an iTunes folder, the latter contained in the former. So there are duplicates.

Based on your description it could also quite likely be that your database needs to be cleaned up. Settings>Library>Library Maintenance>Clean Up Library. You may find something like “Clean Up 3456 files that are not associated with a Storage Location”. This is really easy to do.

Sometimes logging out of Tidal/Qobuz, rebotting the Core and logging back in can solve some log in problems.

This is Roon adding way too many files: 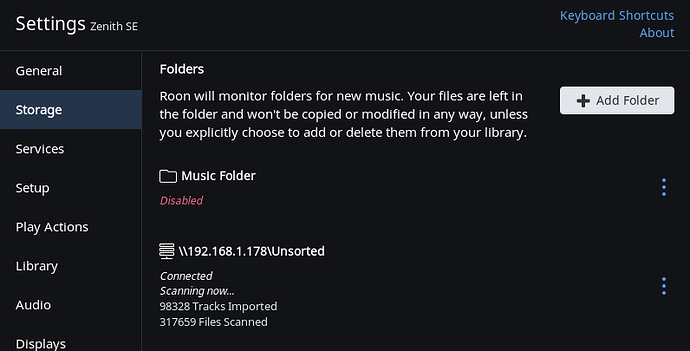 Unsorted is the folder on the server containing all the music

I have re-booted the core numerous times.

How many tracks are supposed to be on the new storage location?

I could see where you might have duplicated records in the database. But I don’t understand how it can be scanning 8X more files than you have in that location unless there are a ton of hidden files (from some synchronized folders of a backup) or some sort of recursive file reading. If it’s the latter Support needs to be involved.

In the process of setting up the new server the music is copied to it from a backup USB. Roon is installed. Roon is restored from a backup on that unsorted drive (where I store Roon backups)

Tried a slightly earlier backup and it solved the Account/Tidal issues. Might have been a corrupted backup. However re-pointing the Storage to the new server/IP caused the same issue (8 versions of each album)

According to Innuos they don’ think I should point to the server. They think it will populate automatically and this may be why I’m getting duplicates. Although not sure why it is getting 8 though.

The solution might be as easy as having music installed in a folder that isn’t in the same path as Roon. On a Nuc/ROCK, Roon is on the SSD at an IP like 192.168.1.200/Data/RoonServer and the music is in a separate file structure, 192.168.1.200/Data/Storage/Internal Storage. They are, if you will, parallel, not serial. But I am over my head from here and won’t try to embarrass myself further.

It is also helpful to have Roon turned off as you copy music into the final destination, then tell Roon where it is. Problems can happen when Roon is scanning the music folder as music is added (but it wouldn’t cause this kind of problem).

Likely not relevant but consider: One issue i had recently was that i had the backup location set inside the same root folder as my music files. Roon was trying to catalog the backup files, it added 100s of 1000s of “tracks” and took forever to scan whenever i made a change.

Hello Scott - appreciate the comments.
The unsorted folder only has one copy so it was odd. This also seemed to be incrementing as I continued to restore backups (1st time 2 copies, 2nd time 4, etc). I was also seeing duplicates using a LMS player so something could be wrong with the Innuos backup or library index (which I should have rebuilt).

So I decided to reset the unit and instead of restoring from the usb backup, I am copying my music over the network and will restore Roon from a backup once done.

We’ll see how it goes. Will take another day or so.

That would do it. I don’t have my backup off of that structure though.

However I have had that situation in the past. I sync my library to another drive using goodsync. Goodsync saves deletes in a folder off the root. I couldn’t figure out why I was getting duplicates until I looked in that saved folder and deleted them

This ended up being a database issue on the Innuos that was corrected by them. Known issue migrating a backup from a different model