I migrated Roon from a MacMini to a PC (Windows 7). Everything went well. I first installed Roon server and Roon client thereafter. I then followed the migration instructions to restore the latest backup. All went well and after the restore had finished the client on the same machine as the core showed all my old albums. The problems started when I tried to open a client on another computer/iphone/ipad. Each of them went through the usual routine of asking me to choose a new core because the old one wasn’t there any longer, which I did. They then all showed a virtually empty library with only 3 instead of several thousand albums (see screenshot); playlists, audio zones etc are also similarly lacking. According to the migration instructions after a successful migration I would not have to do anything else if my music resides on a NAS, which it does (“Networked storage devices (like a shared folder on a NAS) will work without any further changes after restoring“), yet in Settings > Storage the music folders I use are not listed. I added them and now Roon is reading them again. Please explain what might have gone wrong and whether or not your Migration instructions are actually correct.

Luke you might like to provide a lot more details on the specs etc of the new Core installation. Please see this for details that might be important to supply.

Also tagging @support as I have done here will get some attention too.

This is where the strange stuff started happening. After the restore the client on my core PC showed that everything was as it should be. All my music was there, playlists, even the internet radio stations. However, when I started a client on another device it suddenly asked me to log in and tell it where the music could be found. There were no playlists, no radio stations. It looks like I ended up with two libraries: one on the core pc and another accessed by the non-core-pc clients. I have no idea how to deal with this.

Perhaps I should add that the backed up version ran on a MacMini but that I had disconnected the Mini before attempting any restorations.

So although you only have one licence you are effectively running two cores?

Whatever gave you that idea? I was migrating the core from a MacMini to a Windows PC. Early in the whole restoration process the MacMini core was disabled by Roon.

If you mean that a second core might have been setup at a later stage, you may be right. But where is it, how did it happen, and how do I get rid of it? I am basically trying to accomplish two things now:

I only mention it because of know of someone it happened to.

I just had a look at the Roon folders in the Windows library and noticed that there are two folders: “Roon” and “Roon Server” and both have a database. Is this right or should I close the server app, delete the server folder and re-install the server app?

I think you’ve run into a problem because you’ve installed 2 instances of Roon on the same machine - Roon and Roon Server. The “client” you refer to is actually a server (core) too.

If you have both RoonServer and Roon installed on the same PC then that is correct. Just like on my PC.

If that is not what you did, then I would uninstall Roon client, and then re-install making sure you chose to connect to an existing core.

I am pretty sure I did not make the mistake you suggested. This is not the first time I have installed Roon nor the first time I have migrated. However, I cannot be absolutely sure. As I explained in my original mail I did exactly what you described here too. I installed the server first, then the client, after which I went through the restore operation. I do not remember ever having seen an option asking me to choose the RoonServer to connect to.

The problem now is that the server seems to refer to the wrong library (it has none of my radio stations, favourites, etc), but the client has the right one. What procedure would you suggest so that I end up with a working copy of my old library?

The main Roon software can be both a client and a server. During the install, when Roon first starts up it will ask you to choose a Core, it can be an existing Core (even if it is on your own machine) or to use this new installation as a core. See pic. 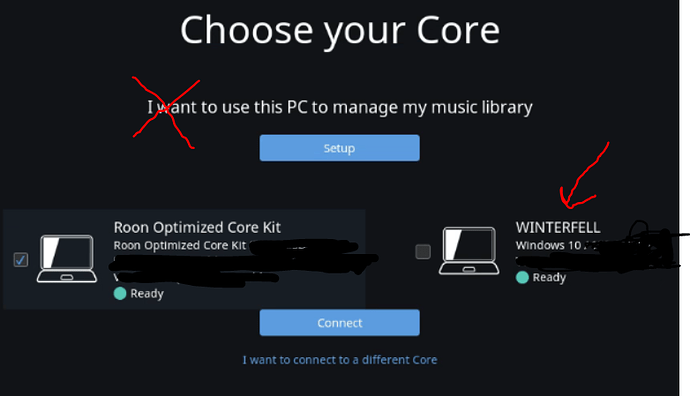 If you chose the option “I want to use this PC to manage my music library” then you are setting that Roon up to be a Core and not a Remote. An existing RoonServer would appear like my two Servers and you should choose one of them and hit connect.

It sounds like you installed Roon as a server instead of a client and then restored the database to it, not the RoonServer core. If that is the case, then you need to roll back what you did. Uninstall Roon. Verify that RoonServer is up using a different control source, laptop, other PC, and restore the backup to it. After the backup is restored, then re-install Roon and make sure you choose the RoonServer core during installation.

After your last mail I came to the same conclusion and that is what I have done.

) has yielded any change with your setup.

Please let me know as I will be glad to lend a hand if further troubleshooting is required. Looking forward to your update!

I am grateful for all responses and they made me realise that for whatever reason I ended up with two cores. It would have been nice if there had been an option to choose one of them and get rid of the other, but there isn’t, so I uninstalled the lot and went back to the MacMini. I am expecting a new Windows machine in the not so distant future, so I can go through it all again and hopefully this time it works.