Misalignment between Roon/TIDAL and standalone TIDAL?

Just ran into some unusual behavior: exploring an artist I found an intriguing TIDAL album, but attempting to play it produced … nothing. Importing it into my library had the same result. Now I see an ‘unavailable’ note on the Roon album view Interestingly, I can’t find this album directly via the TIDAL app, so maybe it only exists in some out-of-date Roon copy of their catalog? (But TIDAL’s search is generally poor, so who knows…)

The album in question is “Jumpin’ In” by the Dave Holland Quintet. I have posted a screen grab to illustrate the problem. 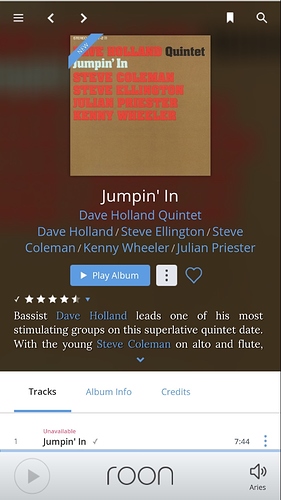 I don’t know the exact answer but here’s a few ideas:

There are a lot of albums listed in the Tidal database that are unavailable for streaming (such as all of the ECM catalog).

In addition, there isn’t a 100% match between the up to the minute database at Tidal and the Roon database for Tidal.

The Roon database can lag a few days behind, depending on how often Roon updates. In one of the other threads they explained that they have to update the entire Tidal database periodically, so there is a lag. They hope at some point to get to a situation where there update is almost up to date, with only a very small lag (hours) between the two databases.

The album does still existing in TIDAL, but is unavailable for streaming. Most likely, TIDAL no longer has the rights to stream it.