In the Chandos recording by Hickox/LSO of Britten’s War Requiem, track 5 on CD 1 is identified as “One ever hangs where shelled roads part.” On the actual CD (I’m looking at the back of the CD case), that track is identified as “Agnus Dei.” ??

In that piece the genres are mixed. It could be that both are correct…

Hi James, thanks for raising this issue. This is quite a difficult one and highlights (IMO) one of the weaknesses of the Rovi classical data structure.

I’ve verified that we are processing the metadata correctly. Rovi provides links from individual tracks to composition parts.

The problem is a general one where the disc structure of a particular performance of a composition differs from the canonical structure of the composition defined in the metadata. In this case, Rovi has split the War Requiem into six Sections, each of which contain one or more Parts. On the CD, each track encompasses an entire Section; but Rovi can’t map section names to tracks… So they’ve applied the first Part in each Section to the track. (Note also that your track 3 doesn’t match up either…)

At the moment, I really don’t think that there’s anything that I can change here, though I appreciate the annoyance. However, I’m going to bear this problem in mind as we move forward with a new metadata system. 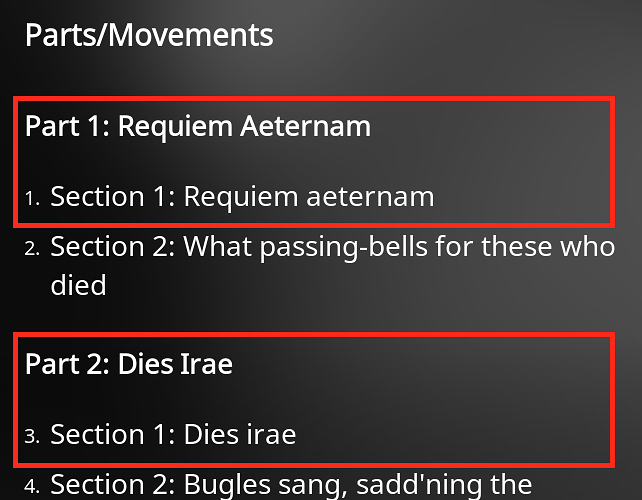